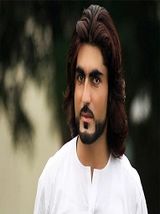 Naseemullah mehsood later famous as Naqeebullah Mehsood was a young handsome 27 years old guy who had a dream of becoming model and to send his only son in Pakistan Army but there was something else written in his fate. On 12th January 2018 he was shot dead in a fake police Encounter and with his body his all dreams got buried with him. His name was Naseemullah Mehsud but he was famous as Naqeeb Mehsud.He lived in a village Rizmik of district Makeen, South Waziristan . Makin or Makeen is a small town in South Waziristan, Pakistan. It is located on the Y-junction between Sararogha and Wana.  After Waziristan operation , Naqeeb moved to Karachi with his Family. From 2008 Naqeeb was doing work of steel mill loading with his uncle. Naqeeb was a family man .He was a respectable and innocent citizen.He had a wish to be a Model.  He had 3 kids, Naila , Alina and Atif.He had a wish to send his son in Pak Army. He was planning to start a cloth Business in Sohrab Goth.  [1] Biography Biography On 3rd of january 2018 afternoon at 3’o clk Police arrested Naqeebullah Mehsud as a suspect of terrorist. From Gul shehar Agha Hotel chapal garden, Sohrab goth Karachi. On 12 january we came to know that Naqeeb was shot dead in a fake police encounter . His family was searching for him from days with hope and fear . They found his dead body from Chhipa Center. Police is still unable to tell that in which case they have arrested Naqib Mehsud. He is burried in Dera Ismail Khan.

Rao Anwar was elected as SSP Malir in 1982 and when he became sub-inspector, he appointed as SHO for Nazimabad as he was also involved in two operations against MQM at that time. Lots of officer transferred from one post to another but Mr Rao stick to his seat and once when he had to leave his post, he assigned as SHO Jackson with the help of higher political figure. He had also rejected the request of sorry to MQM from former SP Chaudhry Aslam and went to Balochistan from where he returned in 2008 at Karachi at the time of the ruling government of PPP. [2] About Rao Anwar

SSP Anwar maintained that Naqeebullah was involved in major acts of terrorism and was residing in an apartment on Abul Hassan Ispahani Road. In an effort to support his claims, the SSP had supposedly also issued a document detailing Naqeebullah’s path to militancy. He was reported to be a brother-in-law of Sher Dawood, a commander of the TTP, who motivated him to join the banned outfit and allegedly received weapons training in 2007/2008 at a TTP camp in Miranshah. Naqeebulah was also associated with TTP commander Sanaullah Mehsud, claimed SSP Anwar.  [3] Reviews of Rao anwar

Reviews of His Friends

Naqeeb had migrated along his family from Waziristan to Karachi. The money he used to earn through laborious work in a mill were mostly spent on his hair style and clothes, told his relative Noor Mehsud. Noor said he was very sensitive about his hair style. Naqeeb not only cared for his personal hair but he would also do his son’s hair in David Beckham style. Watching his videos and pictures doing rounds on social media one feels like he was a normal person just like many other men living in the megapolis and he knew how to enjoy his life. [4] Reviews of his friends

Following the news of Naqeebullah’s death, a large number of people posted condolence messages on their Facebook timeline, with some including photos of his body in a coffin. On Facebook group Halaat Updates, where Karachiites discuss everything from electricity outages to open manholes, social media users accused SSP Anwar of staging fake encounters for personal benefit. “Many black sheep in police do fake encounters to get rewards and promotions,” wrote one user. Another wondered whether the man was killed “because he belonged to the tribal areas”. One Facebook user posted a screenshot of a conversation he said he had had with Naqeebullah, in which the latter had reportedly wished that his son would join the Pakistan Army. Though this claim could not be verified, SSP Anwar had claimed in his factsheet that Naqeebullah had no wife and children.  [5] Outrage on social media Finally justice has been given to Naqeebullah, SSP Rao Anwar has been removed from his post who killed him in a police encounter.  the committee stated that there was no proof found of Naqeebullah being a terrorist. The 2014 FIR presented by Anwar was also bogus, it said. The committee in its report also recommended the registration of a case against Rao Anwar and other personnel involved in Naqeebullah’s killing. Anwar’s name should also be placed on the Exit Control List (ECL), the report stated. [6] Justice to Naqeebullah