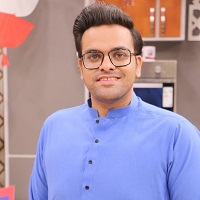 Aadi Amjad is a great performer who couldn’t get a chance to play the lead role yet his supportive characters are powerful enough that people can’t stop looking at him. He gained gigantic applause and acknowledgment with his hosting skills in the popular show ‘Salam Zindagi.’ Later, he started hosting with Faizan Sheikh in his own show ‘Mazedar Show.’

Aadi has been part of various dramas and a few Lollywood movies as well. He is always vocal about his point of view and never hesitates to give his stance on ongoing controversies in the showbiz industry. He is also getting appreciation from a reality show ‘Tamasha Ghar.’ Aadi is a talented host and an actor who is known for his perfect comic timings. Despite being the powerhouse of talent, he couldn’t gain the deserving attention. However, he is known for his hosting skills. Aadi is a confident person who always jumps into different controversies and speaks his heart out. He has a strong bond with another Pakistani actor Faizan Sheikh.

He has participated in the reality show ‘Tamasha Ghar’ which is a copy of the Indian reality show ‘Big Boss’ hosted by superstar Salman Khan. His intense transformation from being overweight to being a fit star made people shocked. He is surely a  great performer who knows how to seize the audience’s attention.

He was born on 25th December 1986 in Karachi. He is still living there.

Aadi came from a broken family. In one of his interviews, he revealed his unhealthy relationship with his mother. Due to some misunderstandings, he didn’t talk to his mother for several years. Aadi does not share his personal information that’s why many people are not aware of his family background. However, he is unmarried.

As a host, he started his career with Faysal Qureshi in the show ‘Salaam Zindagi.’ He gained immense acclaim through this show. After some years, he left the show and started hosting his own show with his dear friend Faizan Sheikh. Various notable celebrities including Ayeza Khan, and Fahad Mustafa became a part of that show.

Aadi has been a part of some Pakistani dramas and has worked with many senior and top artists. Despite being a  great performer, he couldn’t get the lead role and has always shown up in supporting characters. A few of the dramas where he acted include ‘Ready Steady Go,’ ‘Be Intiha,’ ‘Beti Jesi,’ etc.

He also made his acting debut in 2022 in the movie ‘Peechay Tou Dekho’ opposite Nawal Saeed.

In 2022, he participated in a reality show ‘Tamasha Ghar’, a copy of the Indian show ‘Big Boss.’ He remained the most favorite contestant on the show. Adnan Siddiqui is the host of this show while it airs on ARY Digital. Despite a lot of trolling, people are going crazy for this show.