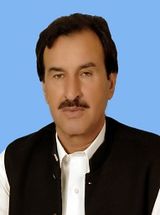 Mr Nasir Khan also famous as Nasir Khan Afridi  is a Pakistani politician.He was elected as a member of the National Assembly of Pakistan (MNA) from June 2013.He is an Independent Candidate. Nasir Afridi was selected to the National Assembly of Pakistan (MNA) as an independent candidate from Constituency NA-46 (Tribal Area) in general election, 2013.In 2014, an election tribunal declared the election null,void and ordered again election in the constituency.His National Assembly membership was later restored by the court.[1]  Political Career

Three people were killed and 19 other injured in a bomb blast at an election office in Maqsoodabad area, Peshawar.The device exploded outside the election office of independent candidate Nasir Khan, in Maqsoodabad, Landai Sarak in the jurisdiction of Khazana police station. Khan is contesting elections from the constituency of NA-46 and has previously served as a senator.[2]  Election Office