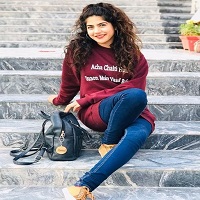 Arij Mohyuddin is a young star who entered the showbiz industry a few years ago and has successfully made her place. She started getting offers while studying to which she instantly said yes. This young and stylish actress is known for her role in the popular drama ‘Qissa Meherbano Ka.’

Her beautiful curly hair and her colored eyes make her distinguished among others. The ways she adjusts to each character she plays is surely going to make her a big star in the future. Arij has studied IT and is the only one in her family to join the industry. Arij is a talented and young Showbiz star who was approached for acting when she was studying IT. She is fond of Mahira Khan‘s acting skills and aspires to be like her in the future. In 2018, she appeared in her first drama ‘Tajdeed-e-Wafa’ in a supporting role, and today, she has started getting lead roles. Being the only daughter and the only showbiz personality in a family. it wasn’t easy for her to convince her family.

Besides doing dramas, she also wants to show her talent in movies and would likely like to work as a model. Arij has given various appearances on different morning shows. She has also appeared in a few advertisements. Arij also runs her Youtube channel where she keeps posting different videos.

She was born on 23rd March 1997 in Islamabad. She lives in Karachi for her work as well.

She has studied IT and is a graduate now. However, instead of following her degree, she decided to follow her passion. She got the offer from showbiz in her 7th Semester.

She is the only daughter and the only sister of 4 brothers. Currently, Arij is unmarried. In 2018, Arij made her showbiz debut in the drama ‘Tajdeed-e-Wafa’ on HUM Tv starring Ahmad Ali Akbar, Naveen Waqar, Haroon Shahid, and Ainy Jaffry. After that serial she became prominent and it is how her journey started.

She has been a part of many serials so far as a supporting and lead actress as well. The serial that gave her hype is ‘Qissa Meherbano Ka’ starring Mawra Hussain and Ahsan Khan. As a lead actress, she appeared in the drama ‘Roag’ opposite Adeel Chaudhry and Arez Ahmed.