Fawaz Ahmed also known as Fawaz Ahmed Hashmi is a Pakistani Politician who is serving as a member of the Provincial Assembly while being attached to the Pakistan Tehreek e Insaf since 2018. He is elected as MPA in October By-elections. This article contains all the information about him including Fawaz Ahmed Biography. 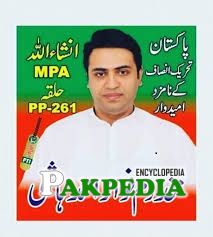 Fawaz Ahmed Hashmi hails from Rahim Yar Khan is a Pakistani Politician who is currently functioning as a member of the Provincial Assembly after winning the By-elections while being affiliated with Pakistan Tehreek e Insaf. He is working hard to attain the perception of Naya Pakistan glimpsed by the PTI government.

He ran for the seat of the Provincial Assembly for the first time in 2018 October By-elections from the Constituency PP-261 ( Rahim Yar Khan-VII ) while being attached to Pakistan Tehreek e Insaf and gave defeat to his opponent Hassan Raza of Pakistan Peoples Party. He took an oath on 22nd October 2018.