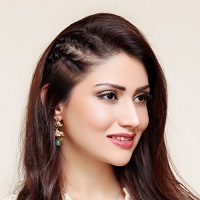 Anam is a delightful and alluring Pakistani actress who has worked in showbiz for 1 decade and has appeared in numerous shows. She used to be a TV host and writer as well, but after getting a chance in dramas, she kept her entire focus on acting. Despite having an amazing screen presence and great facial expression, she never got a chance in the lead role.

She knows how to seize attention and acknowledge herself, even in supporting characters. She manages to pull it off well, whether it be a negative character or a serious role. Anam is an inordinate addition to the industry who has a long way to go.

Anam Tanveer is a Pakistani star who is working as an actress but also served as a model, tv host, and writer. With her perfect height and beautiful face, she knows how to mesmerize everyone on screen. She has been seen in many dramas where she performed quite well. Apart from dramas, she was also seen in a few Pakistani movies.

In 2016, she was honored with the Youth Icon award. She portrayed many characters amazingly, which later became her identity. She did her best to make her place in the industry from her debut serial.

She was born on 8th February 1986 in Karachi. She is still living here with her family.

She is an educated actress who studied MBA in marketing from Shaheed Zulfiqar Ali Bhutto University.

In 2011, she appeared for the first on screens in the show ‘Dum Dum Dee Dee’ where she showed her hosting skills. She is indeed blessed with the best voice, but she didn’t pursue this profession and decided to opt for an acting field.

The next year in 2012, she was given a chance to make her debut on the small screen in the drama ‘Mere Dard ko jo Zuban Milai’ opposite Sarwat Gillani, Shehryar Munawar, etc. She did well, and the list of dramas started coming her way. A few noted serials where she portrayed her acting skills are ‘Joru Ka Ghulam,’ ‘Waada,’ ‘Shehrnaz,’ ‘Do Bol,’ ‘Raaz e Ulfat,’ etc.

Everyone also appreciates her evil role in the popular soap serial ‘Woh Pagal Si’ starring Hira Khan and Saad Qureshi. Anam is undoubtedly a great actress who couldn’t be in a lead role despite having all the qualities that make her a perfect actress.

In 2013, she participated in a reality show ‘Madadventure.’ It was the first season that Ahsan Khan hosted.  Not only Pakistani but Indians also participated in that show. From Pakistan, the winners of the season were Sana Fakhar and Mehwish Hayat.