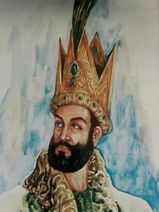 One of the most controversial personalities in the history of South Asia, Mahmud Ghaznavi is known as one of the greatest conquerors the world has ever seen. He was one of the very few leaders who were never defeated in a battlefield. Born in 979, Mahmud became the Sultan of Ghazni in 998. He inherited the small state of Ghazni from his father Subuktigin, and turned it into an empire that lasted for about a century. He was a brave man and use to take part in all the battles his forces fought. Though he was interested in extending his empire toward Central Asia, the maneuverings of the Hindu rulers of Punjab forced him to invade South Asia. He came to South Asia seventeen times and went back to Ghazni every time with a great victory. He fought against the strong forces of Jaipal, Annadpal, Tarnochalpal, Kramta and the joint forces of Hindu Rajas and Maharajas but all of them were forced to flee away from the battlefield due to Mahmud’s war strategy as a general. After the conquest of Multan and Lahore, Mahmud made Punjab a part of his empire in 1021. Mahmood Gaznavi was born in 971AD, in khurasan.  Mahmood Ghazni was the son of Abu Mansur Sabuktigin, who was a Turkish slave soldier of the samanid ruler. In 994 Mahmood joined his father in the conquest of Ghazni for Samanid ruler, it was the time of instability for Samanid Empire. In 998AD Mahmood took control of the Ghazni and also conquered Qandahar.[1] Mini Bio –  Mini Bio

In 971 CE, Yamin ad-Dawlah Abdul-Qasim Mahmud ibn Sabuktegin, better known as Mahmud of Ghazni, was born in the town of Ghazna, now in south-east Afghanistan. The baby’s father, Abu Mansur Sabuktegin, was Turkic, a former Mamluk warrior-slave from Ghazni. When the Samanid dynasty, based in Bukhara (now in Uzbekistan) began to crumble, Sabuktegin seized control of his home town of Ghazni in 977. He then went on to conquer other major Afghan cities, such as Kandahar. His kingdom formed the core of the Ghaznavid Empire, and he is credited with founding the dynasty. The baby’s mother was likely a junior wife of slave origins. Her name is not recorded.[2] Early Life –  Early Life

Not much is known about Mahmud of Ghazni’s childhood. We know that he had two younger brothers, and that the second one, Ismail, was born to Sabuktegin’s principal wife. The fact that she, unlike Mahmud’s mother, was a free-born woman of noble blood would turn out to be key in the question of succession when Sabuktegin died during a military campaign in 997.On his deathbed, Sabuktegin passed over his militarily and diplomatically skilled eldest son Mahmud, 27 years old, in favor of the second son, Ismail. It seems likely that he chose Ismail because he was not descended from slaves on both sides, unlike the elder and younger brothers. When Mahmud, who was stationed at Nishapur (now in Iran), heard of his brother’s appointment to the throne, he immediately marched east to challenge Ismail’s right to rule. Mahmud overcame his brother’s supporters in 998, seized Ghazni, took the throne for himself, and placed his younger brother under house arrest for the rest of his life. The new sultan would rule until his own death in 1030. Mahmud of Ghazni left behind a mixed legacy. His empire would survive until 1187, although it began to crumble from west to east even before his death. In 1151, the Ghaznavid sultan Bahram Shah lost Ghazni itself, fleeing to Lahore (now in Pakistan).The Sultan Mahmud spent much of his lifetime battling against “infidels” – Hindus, Jains, Buddhists, and Muslim splinter-groups such as the Ismailis. In fact, the Ismailis seem to have been a particular target of his wrath, since Mahmud (and his nominal overlord, the Abbasid caliph) considered them heretics.Nonetheless, Mahmud of Ghazni seems to have tolerated non-Muslim people so long as they did not oppose him militarily.This record of relative tolerance would continue into the following Muslim empires in India: the Delhi Sultanate (1206-1526) and the Mughal Empire (1526-1857). In 1001 AD, he started his military companies, which were lasted before his death in 1030 AD. Mahmud’s campaigns seem to have been motivated by religious zeal against both the Fatimid’s Shiites and non-Muslims; Buddhists, Jains and Hindus. Mahmood of Ghazna was one of the undefeatable military commanders of the World. He attacked South Asia seventeen times successfully and went back to Ghazni every time with a great victory. He fought against the forces of Jaipal, Annadpal, Tarnochalpal, Kramta and the joint forces of Hindu Rajas and Maharajas but all of them were forced to flee away from the battlefield due to Mahmood’s war strategy as a general.[3] Military campaigns –  Military campaigns

The military campaigns of Mahmood Ghaznavi made him controversial personality in the history of South Asia. Mahmood of Ghazni destroyed important Hindu shrine- Krishna Janmabhoomi Temple (known as Kesava Deo Temple) in 1017 AD along with several other Hindu and Buddhist temples in the holy city of Mathura. Mahmud of Ghazni destroyed and looted one of the most sacred temples of Hindus- Somnath Temple in 1025 AD killing over 50,000 people who tried to defend it. Due to this Mahmood Ghaznavi is considered as a looter and plunder by the most of the non-Muslims of South Asia. Sultan Mehmood’s  first campaign was against the Qarakhanid Empire, which controlled the northern portion of his Empire. After his defeat, he enlisted the alliance of the Seljuk Turks in southern Soghdia and Khwarazm  who aided him in securing the north by diplomacy (998). In 999 ‘Abd al-Malik II  of the Samanids engaged in hostilities with Mehmood  over Khorasan  after political alliances shifted under a new Samanid Emir. These forces were defeated when the Qarakhanids under Nasr Khan invaded them from the north. Mehmood then solicited an alliance which was cemented by his marriage to Nasr Khan’s daughter. He already had relationships with the leadership in Balkh through marriage. It’s local Emir Abu Nasr Mohammad , offered his services to the Sultan and his daughter to Mehmood’s  son, Muhammad . Image of Mehmood  in his court where noblemen and noblewomen convened. After Nasr’s death Mehmood  brought Balkh under his leadership. This alliance greatly helped him during his expeditions into Northern sub-continent.

The Multan and Hindu Shahi struggles Mehmood’s  first campaign to the south was against the Ismaili Fatimid Kingdom at Multan in a bid to curry political favour and recognition with the Abbassid Caliphate , he engaged with the Fatimids elsewhere. At this point, Raja Jayapala of the Hindu Shahi Dynasty in (Lahore and Kashmir) attempted to gain revenge for an earlier military defeat at the hands of Mehmood’s  father, who had controlled Ghazni  in the late 980s and had cost Jayapala extensive territory. His son Anandapala succeeded him and continued the struggle to avenge his father’s suicide. He assembled a powerful confederacy which faced an unfortunate defeat as his elephant turned back from the battle in a crucial moment, turning the tide into Mehmood’s  favour once more at Lahore in 1008 bringing Mehmood  into control of the Hindu Shahi dominions of Updhanpura. There is considerable evidence from writings of Al-Biruni , Soghidan , Uyghur and Manichean texts that the Buddhists, Hindus and Jains were accepted as People of the Book and references to Buddha as Burxan or as a prophet can be found. After the initial destruction and pillage, Buddhists, Jains and Hindus were granted protected subject status as Dhimmis . By that time, however, most of the centers of Buddhist and Hindu learning were already destroyed.

Ghaznavid campaigns in the Subcontinent

Though he was interested in extending his empire toward Central Asia, the maneuverings of the Hindu rulers of Punjab forced him to invade South Asia, (Although, it is an existing perception of the historians that Mehmood  didn’t have any interest to rule Sub-continent, Mehmood  had respect for other religions. A large number of Hindus lived in Ghazni, and they enjoyed religious freedom. One of his commanders named Tilak was a Hindu. A number of soldiers in his army were also Hindus. Mehmood attacked the Hindu Temples in India because of political and not religious reasons). After the defeat of the Rajput Confederacy, He deciding to teach them all a lesson for combining against him, he came to South Asia seventeen times and went back to Ghazni every time with a great victory. He fought against the strong forces of Jaipal, Annadpal, Tarnochalpal, Kramta and the joint forces of Hindu Rajas and Maharajas but all of them were forced to flee away from the battlefield due to Mehmood’s war strategy as a general. After the conquest of Multan and Lahore, Mehmood made Punjab a part of his empire in 1021.

Mehmood was also a great patron of learning. His court was full of scholars including giants like Firdosi the poet, Behqi the historian and Al-Biruni the versatile scholar. It is said that he used to spend four hundred thousand golden Dinars on scholars. He invited the scholars from all over the world and was thus known as an abductor of scholars. Under Mehmood, Ghazni became one of the most important and beautiful cities of the Islamic world. It was the city of mosques, madrasas and libraries. He also established a Museum in Ghazni. During his rule, Lahore also became a great center of learning and culture. Lahore was called ‘Small Ghazni’. Saad Salman, a poet of those times, has written about the academic and cultural life of Lahore.

In 1026, the 55-year-old sultan set out to invade the state of Kathiawar, on India’s west (Arabian Sea) coast. His army drove as far south as Somnath, famous for its beautiful temple to the lord Shiva.

Although Mahmud’s troops successfully captured Somnath, looting and destroying the temple, there was troubling news from Afghanistan. A number of other Turkic tribes had risen up to challenge Ghaznavid rule, including the Seljuk Turks, who had already captured Merv (Turkmenistan) and Nishapur (Iran). These challengers had already begun to nibble away at the edges of the Ghaznavid Empire by the time Mahmud died on April 30, 1030. The sultan was just 58 years old.