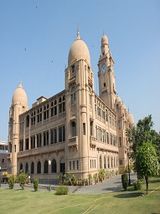 Karachi Municipal Corporation Building grand edifice has evolved as an icon of the landmark structures of Karachi Construction of the KMC Building started in 1927 and was completed in 1930. The building was inaugurated in 1932. Now a days it houses the various departments and offices of the Municipal Corporation of Karachi. Do not bother going inside, as the environment will most probably put you off – offices with cramped conditions, grumpy staff, and a general air of neglect. Admire the building for what it is on the outside – a surviving relic from the days gone by. One of the historical British Raj buildings, has evolved an iconic status as one of the landmark structures of Karachi.This Anglo-Mughal architecture building was built in 1930 with local sandstone from Gizri and Jodhpur red sandstone at the front and is said to be the crown jewel of colonial era architecture in the city.The clock tower was made to honour and commemorate the visit of King George V, the Emperor of India of that time.[1]  History The large (and, surprisingly, properly functioning) clock on the highest center tower is an eye-catching treat.[2]  Clock

on 12 Feb 2006 The city government had decided to open the historical building of defunct Karachi Municipal Corporation for general public and tourists once a week. The decision was taken in a meeting presided over by Naib Nazim Nasreen Jalil. EDO Community Development Rehana Saif, EDO Works and Services Sarfraz Ali Shah and other officers attended the meeting. Nasreen Jalil said that the historical KMC building was an important national heritage and it should be preserved in its original shape. She said that the city government would undertake a programme to renovate other such historical buildings. In this regard, she said, Pakistan Heritage Foundation President Yasmeen Lari would organize a training programme for the engineers of city government departments enabling them to carry out preservation of historical buildings.  [3] KMC Building