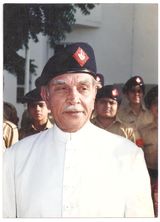 Hakim Muhammad Saeed was a medical researcher, scholar, philanthropist, and a Governor of Sindh Province, Pakistan from 1993 until 1996. Said was one of Pakistan’s most prominent medical researchers in the field of Eastern medicines. He established the Hamdard Foundation in 1948, prior to his settlement in West Pakistan. In a few years time, the herbal medical products of the Hamdard Foundation became household names in Pakistan. Hakim Muhammad Saeed authored and compiled about 200 books in medicines, philosophy, science, health, religion, natural medicine, literary, social, and travelogues. On October 17, 1998, Said was assassinated by a group of unknown assailants while he was on his way to attend a medical experiment at the Hamdard Laboratories.[1] Governor of Sindh –   Province, Hakim Muhammad Saeed was born in New Delhi, British Indian Empire in 1922 to an educated and religious Urdu-speaking class. His forefathers and family had been associated with the herbal medicine business, and had established the Hamdard Waqf Laboratories which today has emerged as one of the largest manufacturers of Unani medicines in the world. Saeed attended the local school where he learned Arabic, Persian, Urdu, English and studied the Quran. At age 18, Hakim passed the university entrance test and went on to attend the University of Delhi in 1938. There, Saeed obtained a BPharm and B.S. in medicinal chemistry in 1942.[2] in 1922 to an educated After his undergraduate education, Saeed joined Hamdard Waqf Laboratories as a junior researcher and participated in herbal quality control while formulating medicines. In 1945, Said attended the post-graduate course, and obtained MPharm in Pharmacy from the same institution. Following the Partition and establishment of Pakistan, Saeed left his hometown with his wife and daughter. The family settled in Karachi, Sindh Province of West Pakistan. He established Hamdard Laboratories and served as its first director until his death in 1998. In 1952, Saeed traveled to Turkey where he attended the Ankara University and was awarded a Ph.D in Pharmacy, then returned to Pakistan to devote his life to medicine research. Following his settlement in Pakistan, Saeed began practicing medicine and continued to research Eastern medicines. Having established the Hamdard Laboratories in 1948, Saeed was one the driving force in Pakistan for engaging the research in medical biology and medicines. In 1953, after his doctorate, Saeed joined the Sindh University as the associate professor of Pharmacy and taught courses in organic chemistry. In 1963, Saeed resigned from his position due to amid differences with the Federal government. In 1964, Saeed came into public limelight when he gave rogue criticism to Lieutenant-General Vajid Burkie, then-Surgeon General of Army Medical Corps and then high profile officer leading the Ministry of Health under the government of Field Marshal Ayub Khan. Said criticized the General, saying, “General Burkie used to say that Eastern medicine and homeopathy were quackery”. Saeed began to write articles organised conferences and lobbied hard for the ban of Eastern medicine, and Ayub Khan had to pass a law legalising Eastern medicine, due to amid fear of his government’s bad credibility.[3] Having established the – Hamdard Laboratories

In 1985, Hakim Muhammad Said founded Hamdard University, where he served its first Vice-Chancellor and as a professor.[4] Following his  –   settlement The crowning activity of his life is the establishment of Madinat-al-Hikmah. It comprises Hamdard University with such institutes as Hamdard College of Medicine and Dentistry, Hamdard Al-Majeed College of Eastern Medicine, Hafiz Muhammad Ilyas Institute of Herbal Sciences, Hamdard Institute of Education & Social Sciences, Hamdard Institute of Management Sciences, Hamdard Institute of Information Technology, Hamdard School of Law, Faculty of Engineering Science & Technology, Hamdard Public School and Hamdard Village School. Bait-al-Hikmah (the Library) is also a constituent part of Madinat-al-Hikmah. This is one of the biggest and best-stocked libraries of Pakistan.Said wrote, edited or compiled over 200 books and journals in Urdu and English on Islam, Education, Pakistan, Science, Medicine and Health. Besides writing travelogues of countries he visited, he also wrote books especially for youth and children. He also edited some journals such as Hamdard Islamicus, Hamdard Medicus, Journal of the Pakistan Historical Society “Historicus”, Hamdard Sehat and Hamdard Naunehal. For several years he was also editor of Payami, the Urdu edition of UNESCO’S journal Courier. Said participated in various international conferences on medicine, science, education and culture and traveled widely to many countries of the world. While in Pakistan he organized numerous international and national conferences on topics of prime importance. Said created two widely attended national forums: Hamdard Shura (for leaders of public opinion) and Naunehal Assembly (for children). He held offices and memberships in dozens of national and international organizations related to education and health care. He launched two journals, Hamdard Medicus and Hamdard Islamicus. Hamdard-e-Sehat, which was already being published under his editorship since 1940, also appeared from Karachi in 1948. He launched a magazine for young readers, Hamdard Naunehal, and established a separate division, Naunehal Adab, for producing quality books for children.[5] He launched – magazine Hakim Muhammad Said was murdered on October 17, 1998. His murderers were caught by DIG Farooq Amin Qureshi, CCPO Karachi at that time. He was highly appreciated and is one of the most renowned police officers of Pakistan to this day. Several MQM workers were arrested and subsequently sentenced to death by an anti-terrorism court.[7] was murdered – on October

Hakim Muhammad Said left behind a daughter, Sadia Rashid, who is heading the Hamdard Foundation and the Hamdard Lab, and three grand-daughters: Dr. Mahenemah Munir Ahmed, Amena Mian (who is married and settled in the United States with four children), and Fatema-Tuz-Zahra Munir Ahmed, who has joined her mother at Hamdard.