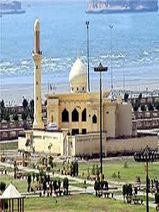 Bagh Ibne Qasim was made with PKR 600 million and was completed in 300 working days. Prior to the initiation of construction on Bagh-e-Ibne Qasim, 73 acres (300,000 m2) of land was freed from the grip of land grabbers. The entire Clifton beach, and the area now covered under the park. [4] Bagh Ibn e Qasim Construction

The Administrator Karachi on this occasion directed to plant seasonal flowers in Clifton Beach Park and Bagh Ibn-e-Qasim including five kinds of flowers which would help enhancing beautification in these coastal parks and provide attractive environment to visitors.He said that day and night efforts were made to make these parks green and attractive picnic points on vast area of seaside.These coastal picnic points were being made attractive and in this connection all necessary measures were being taken.He said that the series of model and family parks along with other big projects were started in the city which provided citizens with green and healthy environment. He said that people from other parts of the country come and visit these parks for picnic at Clifton beach therefore this was very important to keep them in good condition.On this occasion in a briefing Administrator Karachi was informed that the obstacles in restoration of parks had been removed now and the process of providing facilities to citizens were underway and along with walking path, jogging track, lighting towers, canopy benches, restoration of grass fields, new trees, plants and flowers were being planted.

The Work Of Repairing

The work of repairing of flood lights had been started whereas new cables instead of useless cable were being supplied along with planting of thousands of seasonal plants and flowers.The Administrator Karachi said that Clifton beach park consists of 22 acres and in its first phase beautiful park and city forest in second phase had been built in which thousands of trees were planted whereas Bagh Ibn-e-Qasim consists of 130 acres and encroachments, shops and handcarts on 73 acres land of this park established which were removed.He said these two parks at Clifton beach had become identification of Karachi therefore it was necessary to improve and modernize the facilities here so that visitors from whole country could fully enjoy. Meanwhile, KMC Administrator Hussain Syed, Chief Officer Matanat Ali Khan, Senior Director Municipal Services Dr Shaukat Zaman and other officers expressed their deep sorrow on the director and Graveyard Incharge Mehmood Alam Siddiqui.They prayed to Allah Almighty to rest the departed soul in eternal peace and grant courage to bereaved family to bear the loss with fortitude.[6] bagh Ibn e Qasim KMC to Renovate

City Nazim Mustafa Kamal said that Bagh Ibn-e-Qasim would be connected to the sea and the Kothari Parade platform, which used to be in the middle of the sea at the time of its construction, is now being extended and a similar platform will be constructed in the sea. Kamal also said that for the first time in the history of the city government, development work is being done in three shifts with officials present in every shift.

Karachi Metropolitan Corporation Administrator Hussain Syed has said that Clifton Beach Park and Bagh Ibn-e-Qasim were unique and directed to renovate them with seasonal plants and flowers and light up at nights.He directed to finalize the maintenance plan of Clifton Beach Park and Bagh- e-Ibn-e-Qasim as soon as possible so that maintenance work of these two parks would be done on constant basis.
Dec 22, 2012
An exhibition featuring hundreds of chrysanthemums in full bloom opened at Bagh Ibne Qasim in Clifton on Saturday evening. It was after a decade that a chrysanthemum show was held in the city by the Karachi Metropolitan Corporation. . Though a small-scale initiative, the exhibition holds attraction for nature lovers and for those looking for a quiet, cool evening amid flowers and fragrance. More than 60 local varieties of chrysanthemums, a species native to Asia and northeastern Europe, have been aesthetically displayed at the Jahangir Kothari Parade. Some of them are: double, singles, brush, pompons, sprays, reflexed, anemones, incurved, anthemon and buttons.
Dec 23, 2012
People crowded the Bagh Ibn-e-Qasim in Clifton on Saturday to attend the first day of the Gul-e-Dawoodi floral exhibition organized by the Karachi Metropolitan Corporation (KMC). Floral exhibition was being organized by the KMC after a gap of a decade. From next year, exhibition of flowers grown in different nurseries will be held regularly, whereas Gul-e-Dawoodi plants will be distributed among interested members of the public free of charge in the coming years. The Gul-e-Dawoodi exhibition features flowers of 72 different colours and classifications.

A month long flowers exhibition held at Bagh Ibn-e-Qasim, Clifton by the Karachi Metropolitan Corporation (KMC), was inaugurated by the Administrator KMC Syed Hashim Raza Zaidi here. Addressing the inaugural, he directed the Director General Parks to start growing 450 types of Chrysanthemum (Gul-e-Dawoodi) flowers so that with the blossoming season a big exhibition could be arranged, said a statement.[7] Bagh Ibn e Qasim Events