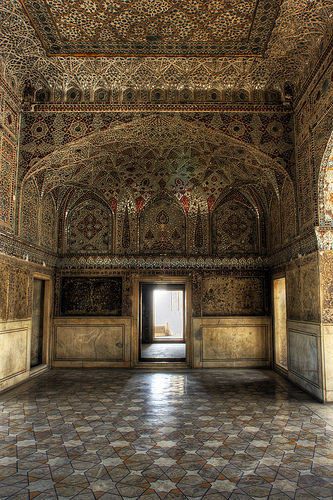 The Badshahi Mosque  or "Emperor's Mosque" was built in 1673 by the Mughal Emperor Aurangzeb in  Lahore ,  Pakistan . It is one of the city's best known landmarks and a major tourist attraction epitomising the beauty and grandeur of the Mughal era.[1] www.sacred - destinations.com Capable of accommodating over 55,000 worshippers, Badshahi is the second largest mosque in  Pakistan , after the in  Islamabad . The design of the Badshahi Masjid is closely related to the Jama Masjid in Delhi, India, which was built in 1648 by Aurangzeb's father, Emperor Shah Jahan.[2] Badshihi Masjid About - Imformation 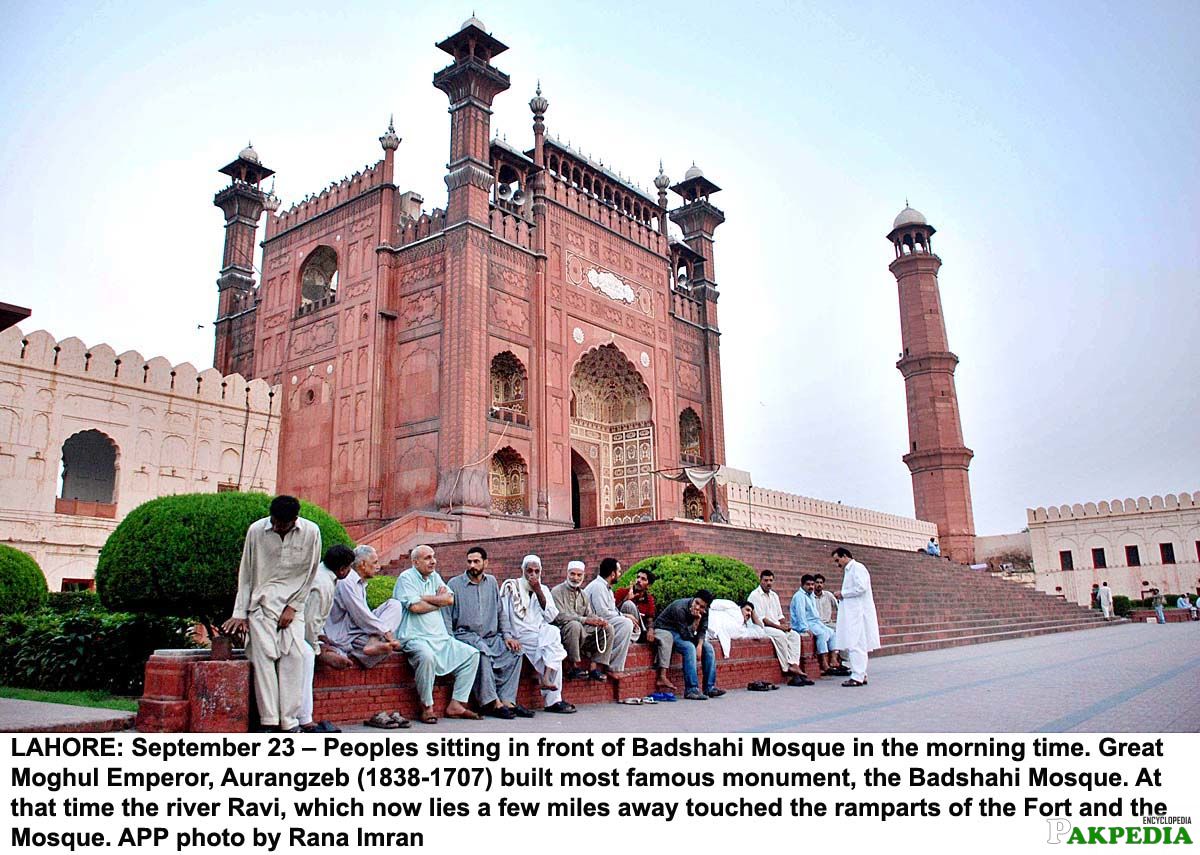 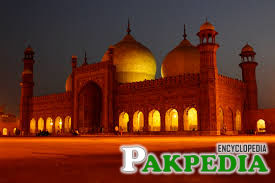 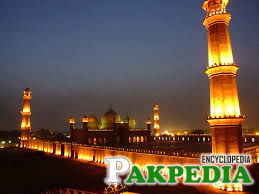 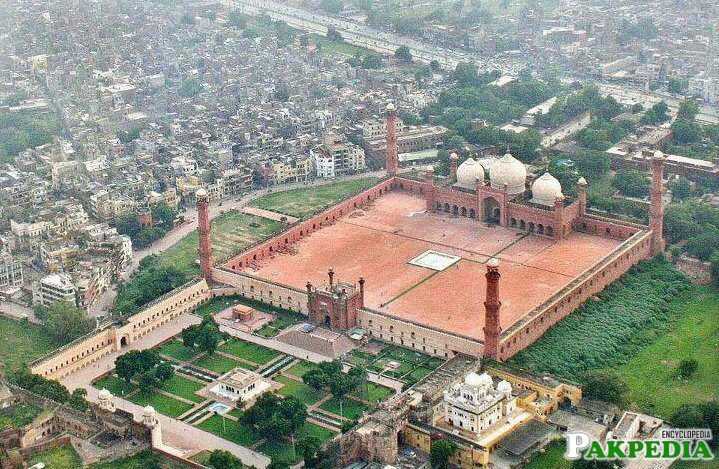 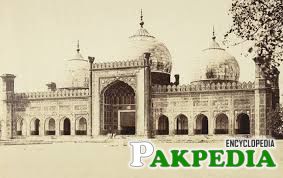 The mosque was built under the patronage of the sixth Mughal Emperor, Aurangzeb Alamgir. It was completed in 1673 under the supervision of Aurangzeb's foster brother Muzaffar Hussain (also known as Fidaie Khan Koka) who was appointed governor of Lahore in May 1671 and held this post until 1675. He was also Master of Ordnance to the emperor.The construction of the mosque took about two years, from May 1671 to April 1673. The mosque was built opposite the Lahore Fort, illustrating its stature in the Mughal Empire. In conjunction with the building of the mosque, a new gate was built at the fort, named Alamgiri Gate after the Emperor.[3] About the History of - Mosque From 1852 onwards, piecemeal repairs were carried out under the supervision of the Badshahi Mosque Authority. Extensive repairs were carried out from 1939 to 1960 at a cost of about 4.8 million rupees, which brought the mosque to its original shape and condition. The blueprint for the repairs was prepared by the late architect Nawab Zen Yar Jang Bahadur.[4] History of Badshahi Mosque - Lahore In 2000, the repair work of marble inlay in the main vault was repaired under the supervision of Saleem Anjum Qureshi. On the occasion of the second Islamic Summit held at Lahore on February 22, 1974, thirty-nine heads of Muslim states offered their Friday prayers in the Badshahi Masjid, led by Maulana Abdul Qadir Azad, the 'Khatib' of the mosque.

The mosque is constructed with the red stone that display a scene of beauty from the entrance through the stairway.The outer circumference of the minarets is 67 feet and the inner circumference. There are 22 steps built to reach the platform for the mosque. There are seven chambers in the mosque and then it contains 3 dooms which reflects the Mughal architecture glory.The interior of the mosque is made of precious stones.10.000 worshippers can easily be accommodated inside the mosque. The courtyard Is even bigger which is able to accommodate 1, 00,000 worshippers in the courtyard. This is truly the largest courtyard for a mosque in the world. The north end of the mosque faces  Ravi River . The eye catching architecture of Badshahi mosque can also be seen from kilometre away inside the City.[5] Elegant Features of BadShahi - Mosque The exterior structure is carved with marble stones giving a beautiful overall look to the mosque.There are minarets in the four corners. The steps are also decorated with marble in the stair chamber. An interesting fact is the original floor of the courtyard was laid with burnt bricks.The walls were also built with burnt bricks. A gate was also planned on the south as well which could not become possible due to the  Ravi River  by its side.The ceiling is flat in the front aisle but it has a curved border at cornice level.[6] Interior of Inside the - Masjid

Entrance to the mosque complex is via a two storey edifice built of red sandstone which is elaborately decorated with framed and carved paneling on each of its facades. The edifice features a muqarna, an architectural feature from the Middle East that was first introduced into Mughal architecture with construction of the nearby and ornate Wazir Khan Mosque.The mosque's full name "Masjid Abul Zafar Muhy-ud-Din Mohammad Alamgir Badshah Ghazi" is written in inlaid marble above the vaulted entrance. The mosque's gateway faces east towards the Alamgiri Gate of the Lahore Fort, which was also commissioned by Aurangzeb. The massive entrance and mosque are situated on a plinth, which is ascended by a flight of 22 steps at the mosque's main gate which.The gateway itself contains several chambers which are not accessible to the public. One of the rooms is said to contain hairs from the Prophet Muhammad's, and that of his son-in-law Ali.[7] Archnet. Retrieved 24 -   August   2016

After passing through the massive gate, an expansive sandstone paved courtyard spreads over an area of 276,000 square feet, and which can accommodate 100,000 worshipers when functioning as an Idgah. The courtyard is enclosed by single-aisled arcades.

The main edifice at the site was also built from red sandstone, and is decorated with white marble inlay. The prayer chamber has a central arched niche with five niches flanking it which are about one third the size of the central niche. The mosque has three marble domes, the largest of which is located in the centre of the mosque, and which is flanked by two smaller domes.Both the interior and exterior of the mosque are decorated with elaborate white marble carved with a floral design common to Mughal art. The carvings at Badshahi mosque are considered to be uniquely fine and unsurpassed works of Mughal architecture. The chambers on each side of the main chamber contains rooms which were used for religious instruction. The mosque can accommodate 10,000 worshippers in the prayer hall.[8] Interior and exterior of the mosque - are decorated

At each of the four corners of the mosque, there are octagonal, three storey minarets made of red sandstone that are 196 feet (60 m) tall, with an outer circumference of 67 feet and the inner circumference is eight and half feet. Each minaret is topped by a marble canopy. The main building of the mosque also features an additional four smaller minarets at each corner of the building.
Disclaimer: As an encyclopedia, pakpedia.pk's articles contains shared information which has collected from different sources and people. We welcome everyone for corrections and updates, Thank you.

Faisalabad Clock Tower is one of those places that

The eye-popping Shah Faisal Mosque, nestled at the