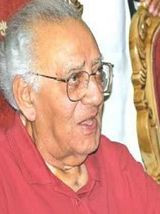 Abid Hassan Manto is a lawyer and president of National workers party. He is also a writer and wrote many books too. He started his political career in 1949 as the member of communist party of Pakistan. Abid Hassan Manto  was born in 1932. His father was a lawyer and wrote poetry, while his mother, who belonged to the Kichlu caste, was a housewife. Minto (also known as Manto or Mantu), Kichlu, Kat’chu, Sapru, and Nehru are castes found in Kashmir. Mr. Minto explained that these are castes of Kashmiri pandits. Mr. Minto’s forefathers had migrated from Kashmir to Amritsar at the beginning of 19th century, and both his father and mother were born in Amritsar. In Rawalpindi, Mr. Minto lived in Arya Mohalla near Liaqat Bagh on Murree Road, which was then called Company Bagh. Mr. Minto’s family included many members of the          I ndian National Congress. Amongst the prominent political members of the family was his granduncle, Dr Saif-ud-Din Kichlu. [1] Biography Biography

He attended Islamia High School, Rawalpindi and Gordon College. He received his law degree (LL.B) from the Punjab University Law College in 1955. While at Law College he was elected President of the Students Union and won and retained the title of “Best All Pakistan Debater” for four years. [2] Education Education

Minto became a member of The Communist Party of Pakistan (CPP) in 1949 and remained with it until it was banned in 1954 after the Rawalpindi Conspiracy Case along with the Democratic Students Federation (DSF) which was also co-founded by Minto in 1949 while at Gordon College. The DSF had been popular in all four provinces and was succeeded, after its ban, by the National Students Federation (NSF) which exists to date. In his younger days Minto was an active Trade Unionist and organized the Military Engineering Service (MES) Workers Union. He worked for the Attock Oil Company Workers Union in Rawalpindi and the Railway Workers Union which was led by Mirza Muhammad Ibrahim,  Minto’s ties with local peasant movements are in place to date. Along with veteran peasant leader Chaudhry Fateh Muhammad, he has worked to organize Kissan (peasant) Committees  in rural Punjab. [3] Political beginning

Minto joined the Progressive Writers Association (PWA) in 1949. He is a literary critic. His first essay “The Issue of Language in Pakistan” was published in 1951 in the literary journal Adb e Latif . Other essays by him, later published as a collection “Nuqta e Nazar(The Viewpoint: 1st Edition 1986 2nd Edition 2003) include: The Problem of Religious Literature ; Literary Criticism ; The Issue of Ideologies in Literature ; Progressive Ideology and Contemporary Literature ; Problems of Modern Poetry  and Eternal Values in Literature . His essay The Technique of the One Act Playا was part of the curriculum for graduate studies in Urdu literature.

Minto is currently the elected President of Workers Party of Pakistan (WPP), founded on 20–21 March 2010 following a merger of five leftwing parties of Pakistan. In 1967 Minto joined the National Awami Party NAP Balochistan). The following year, at the party’s general elections in Dacca, Bangladesh (then East Pakistan) he was elected member of its Central Executive Committee. In 1971, on the eve of East Pakistan’s separation from (West) Pakistan, a number of leftwing political workers from NAP and other groups, held a conference and founded the Pakistan Socialist Party (PSP). C. R. Aslam, a veteran communist leader was elected President while Minto was elected first General Secretary. He stayed with PSP until 1986 and was elected General Secretary three times. Following a split in the PSP in 1986, Minto founded the Awami Jamhoori Party (Peoples Democratic Party) in 1987. On 1 May 1999, the Awami Jamhoori Party, Pakistan Socialist Party and a faction of Pakistan National Party (led by Baloch leader Ghaus Bakhsh Bizenjo) formed the National Workers’ Party. Minto was elected its first President. Minto was elected first President of Workers Party of Pakistan, formed after the merger of five leftwing parties and groups (Communist Mazdoor Kisan Party,National Workers Party,Peoples Rights Movement,Watan Dost Mazdoor Federation, Awami Mazdoor Anjuman) and holds the office to date by election. Awami Workers Party President Abid Hassan Manto has clarified that his party does not consider Gilgit-Baltistan as a “integral, constitutional and historical part of Kashmir”. AWP considers Gilgit Baltistan as an independent entity within Pakistan and it has no constitutional and legal linkage neither with Kashmir and nor with the Kashmir dispute. He also shared a copy of AWP Manifesto with some youth from GB  wherein on page 28 it has clearly been mentioned that AWP considers Jammu kashmir, Azad Kashmir and Gilgit Baltistan as 3 separate entities. [5] Clarification Clarification