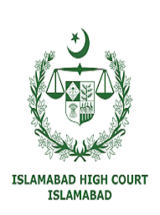 Mr. Justice Muhammad Anwar Khan Kasi is the Chief Justice of Islamabad High Court.Islamabad High Court is a newly established institution. However with the grace of Allah Almighty, it has made steady progress in short period of time. The High Court is performing its basic functions of enforcement of fundamental rights along with fair and just adjudication of public and private litigation. The sole purpose of this website is to facilitate all stakeholders including lawyers, litigants and public at large. I firmly believe this facility would prove another mile stone in achieving the goal of fair and speedy dispensation of justice.[1] Chief Justice Message

Located in Pothohar Plateau, the region has historically been a part of the cross roads of Punjab and Khyber Pakhtunkhwa, with Margalla pass acting as a gateway between the two regions. The city was build during 1960’s to replace Karachi as Pakistan’s Capital. Historically the territory is regarded to be one of the earliest sites of human civilization in Asia. Many great armies such as those of Alexander the great, Genghaiz Khan, Taimur and Ahmad Shah Durani used this corridor through Islamabad on their way to invade the subcontinent.

In 1958, a commission was constituted to a select a suitable site for the National Capital with particular emphasis on location, climate, logistics and defense requirements along with other attributes. After extensive study, research and through review of potential cites, the commission recommended the area North East of Rawalpindi. A Greek firm of Architects, Konstantino Apostolos Doxiadies designed the master plan of the city.

The Federal Government was shifted from Karachi to Rawalpindi under President’s Order No.20 of 1960, which was deemed to have taken effect on the 20th October, 1959 whereby it was stipulated that the Capital of the Republic shall be Islamabad situated in the District of Rawalpindi in the Province of West Pakistan at the site to be selected and the area to be determined by the Central Legislature. It was also provided that until provision was made for establishing the Central Government at Islamabad, the principal seat of the Government shall be at Rawalpindi. Under the Capital of the Republic (Determination of Area) Ordinance, 1963 as required by clause (2) of Article 211 of the Constitution 1962, the area of Islamabad Capital Territory was determined.

Constitution of Islamic Republic of Pakistan

Article 1(2)(b) of the Constitution of Islamic Republic of Pakistan, 1973 declared status of Islamabad Capital Territory as of a distinct territory not forming part of any province. Article 175 of the Constitution provided that there shall be a Supreme Court of Pakistan, a High Court for each province and such other courts as may be established by law. Although Islamabad Capital Territory had not been part of any province of Pakistan yet no independent High Court was established to cater for the litigation pertaining to its area, rather the previous arrangement as made vide Article 3(b) of President’s Order No.8 of 1970 (High Courts Establishment Order 1970) continued. Article 192(4) of the Constitution had provided about extension of jurisdiction of any High Court to any area in Pakistan not forming part of the Province and in this way the Islamabad Capital Territory remained under jurisdiction of Lahore High Court, Lahore. Honourable Mr. Justice Iqbal Hameed ur Rahman is a scion of a noble family that has its roots in the legal fraternity since pre-partition of Indo-Pak Sub Continent. His paternal uncle, late Maudood ur Rahman was a barrister, who later became a Judge of the Chief Court Calcutta. His maternal grandfather late Mr. Ashraf Ali Khan was a barrister and a practicing Advocate in Calcutta High Court. He was also a member of the Bengal Legislative Assembly in Calcutta and was later elected as Deputy Speaker of the said Assembly before partition. His illustrious father late Hon’ble Mr. Justice Hamood ur Rahman was appointed as Advocate General of East Pakistan in 1953, from where he was elevated to the Bench as judge of the Dhaka High Court in 1954. In addition he remained as the Vice Chancellor of Dhaka University (1958-60). He was appointed as judge of the Supreme Court of Pakistan in 1960 and was made the Chief Justice of Pakistan in 1968. Honourable Mr. Justice Riaz Ahmad khan was born on 15-05-1952 in Nowshera (Khyber Pakhtunkhwa). Justice Riaz Ahmad Kan, remained posted as Civil Judge Kohat, Haripur, and Peshawar and lastly posted as Senior Civil Judge at D. I. Khan. He resigned from the said post and started practicing law. During his legal practice, he conducted many well known cases on Civil, Criminal and Constitutional side. He was appointed as Assistant Advocate General (N.W.F.P) in 1997. Later on, he was appointed as Additional Deputy Prosecutor General Accountability, NAB (F), Peshawar and he remained on that post for three years. He was elected as Member Provincial Bar Council (N.W.F.P) in 1999. The rapidly growing importance of Information Technology in this era can not be denied. The miraculous inventions of this technology have revolutionized the human societies. The automation process is continuously occupying almost every field of life in the contemporary world. Courts are no exception to this rule. The Honourable Chief Justice takes keen interest in the automation of working in Islamabad High Court, and it is all because of his personal interest that this Court has made substantial progress in this particular field. The endeavors made during the yesteryear are as under.