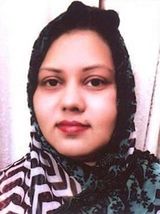 
Faiza Mushtaq is a Pakistani Politician who is serving as a member of the Provincial Assembly while being attached to the Pakistan Tehreek e Insaf for a long time. Her father Deewan Mushtaq Ahmad was the Chairman, Municipal Committee in the past. This article contains all the information about her including Faiza Mushtaq Biography. Faiza is a Pakistani politician who is associated with Pakistan Muslim League N since 2013 and is currently working as a member of the Provincial Assembly on a reserved seat for women. She has previously served on the same post from 2015 to 2018.

He was born on 18 July 1981 in Mandi Bahauddin which is a city in central Punjab, Pakistan. Currently, she resides in the same city from where she contests the Elections.

She holds a postgraduate degree in Human Resource Management which she attained from the Institute of Administrative Sciences, Lahore.

She was born to Dewan Mushtaq Ahmed who has furnished his services as a member of the Punjab Assembly for almost 2 years and also served as Chairman, Municipal Committee for two terms.