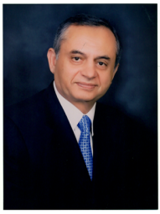 People are the greatest source of inspirations, at times ordinary and at times extra-ordinary. They are always around us but only, if we can pick up or learn from them. Observing people has always remained a great way of learning that most enjoy. One such person is the Founder and Chairman of Descon Engineering Group, Abdul Razak Dawood. [1] Bio and early life He graduated from Columbia University and landed back in Pakistan in October 1968 after 18 years. Got married within 3 weeks. After his marriage, issue came within the family; where should they park this young lad who just came back from America. Lawrencepur, district Attock was decided for him and he gathered his dreams, passion and commitment and went to Lawrencepur as Managing Director of Lawrencepur Woolen Mills. where he simply fell in love with the place. He loved the community life, loved the people,  loved the opportunities. For him it was magnificent. Not because it was easy, but it was challenging

He was welcomed by a strike letter on his first day on the desk MD. He struggled hard to set things straight over the months. He introduced a new brand for ladies called “Layla”. While it was rejected by big brands like HKB, Bombay Cloth House etc. Hee ran a TV commercial and bang; it was a hit. Next, he advertised Layla for PKR 80,000/- budget over 4 months despite the strong resistance from his father. The results changed the world and the next time around it was his father who urged to raise the budget for advertisement .

According to Mr Razaq Dawood “Marketing was not understood properly and there was no market segmentation or product differentiation done ever at Lawrencepur. In order to sell, one needs to understand the pulse of the market first. I used to walk down Anarkali with my father for hours and used to listen to the shopkeepers, the customers, their demands, likes and dislikes in order to set our strategy. And an entrepreneur’s job is exactly the same. “I loved the job and Lawrencepure and gelled in the environment quickly.

There is a well known saying “Man Plans, God commands”. In 1972 Time for change came out of the blue. Mr Dawood’samily had a massive problem putting up Dawood Hercules as a merger where Dawoods and Hercules were fighting and couldn’t solve the problem. Senior members of Dawood family forced me to attend the board meeting and there and then made me the resident director of Dawood Hercules. From rural he moved to the urban. From the large canvas that he was working on and loving every minute of it, he moved to the narrow canvas inside Dawood Hercules. [2] Lawrencepur and DH

Mr Dawood Razaq shares his experience at DH “Here it was different; learning about corporate struggle, board structure, articles of association and lot of agreements. Dawood Hercules had no problems of marketing, no problems of production and no problems of cash flow. It was a problem of different mindsets. Dawood and Hercules could not match cultures of local company with an American multinational. This ugly problem took 1.5 years to be solved by winning the hearts of Americans (Hercules) and maintaining confidence of family members (Dawoods).

Later, he became the CEO. There were no problems in Dawood Hercules unlike Lawrencepur, so I got opportunity to learn engineering. Being 29 years old among the old and experienced engineers working in the plant, he started learning the machinery as well as plant operations. He had no idea what was in store for him but he kept learning. An important day came when a Siemens machine busted and the company called an engineer from Germany. He said the machine cannot be fixed and we need to get a new one which may take upto six months to be delivered. That was hard, shutting the plant for 6 months. We called the local champions, who understood the machine, committed to make a fix without shutting the plant and they did it. For the next six months the plant ran beautifully.”

Take away from Dawood Hercules

“That was the day when I said, I have faith in my Pakistani engineers. It’s about the judgment call that few can take and few cant. Pakistani engineers did it clearly indicating their competency.” Mr Razzaq shared.
“Winds of change in the family started and the family could not stay as it was. I could see it coming and about to break. On 21st April 1981 I was finally asked to go, so I packed up my bags and moved out of Dawood Hercules.

In 1981 he moved to Descon Engineering (Pvt.) Limited, as its founder and till date has been associated with Descon in the capacity of Managing Director and now as the Chairman. Descon Engineering is perhaps the first Pakistani multinational company which is operating in six countries, and having four overseas manufacturing units and more than 30,000 employees. Descon’s employees include over 30 nationalities working in Pakistan and The Middle East. Razak Dawood oversaw the expansion of Descon from Engineering and Construction to Chemicals and Power businesses and now Descon is a recognized brand.

The Descon Group is the largest construction and engineering company in Pakistan positioning itself rapidly in the global markets. In less than 3 decades, Abdul Razak Dawood transformed DESCON from a 1977 start up with 4 engineers to more than 1600 engineers and professionals (employee strength reaching 40,000) globally competitive engineering company based out of Pakistan. The journey began thirty nine years ago, in a five hundred square feet office space at Lahore’s historical WAPDA house. We had a vision to embark on a journey to create Pakistan’s leading engineering enterprise. Over the years, the spirit of our founders inspired our people to not just achieve the ordinary but the extraordinary. This belief became the foundation of Pakistan’s leading engineering conglomerate; Descon. [3] journey

Descon’s global presence spreads across United Arab Emirates, Saudi Arabia, Oman and Qatar from where new ventures are executed in Kuwait, Iraq and Egypt. The development and manufacturing of industrial process equipment and piping spool takes effect from our state-of-the-art plant. The strength of our experienced project team carrying operations have the essential ISO, OHSAS and ASME certifications in addition to our own QA & QC and HSE standards. Driven by a set vision and commitment, Descon strives to add value to our clients’ businesses by providing world-class solutions at cost-effective levels.

Position on which Mr Razaq has served

A Pakistani politician and Industrialist Abdul Razaq Dawood who is considered as one of the most pioneering industrialists of Pakistan has won the bid for the construction of the Rs309 billion Mohmand Dam. This news has been confirmed by the chairman of the Water and Power Development Authority. However, Mian Javed Latif, the leader of PMLN was also present there and has also expressed his views by saying that “On what basis was this contract awarded? Is this not corruption?” While the PTI’s leader Nadeem Afzal Chan uttered that  “Even if the contract awarding process was transparent, Abdul Razak Dawood should issue a clarification.”