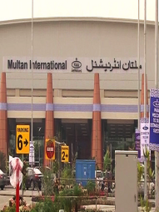 Multan International Airport is located in west side of the Multan in the province of Punjab, Pakistan. It was built to provide airport services to the people of Multan, the airport increased much popularity because of the traffic from surrounding areas of Multan. Local rickshaws and taxi cabs join the airport to the city. There is a wide car parking area which can accommodate more than 400 vehicles. The airport provides both International & Domestic flight operations. The airport is very well organized and efficiently working nonstop round the clock, 7 days a week.
Multan International Airport is a civil and military airport which is serving V-VIPs, VIPs, foreign delegates, and business communities on everyday basis of being capital airport as well as civil organized operations for many airlines. Common people, foreign diplomats, government officials, as well as military officials are greeted at this airport.[1] Multan Airport On 10 July 2006 a Fokker F-27 Friendship, Flight PK688  suffered engine problems suddenly after take-off, because of this problem the pilot loosed control to the aircraft and the aircraft crashed in a nearby ground that was grassy, because of the grassy ground it caused it to catch fire. All 54 passengers and crew members were dead. Poor maintenance work and poor handling of the emergency situation by cockpit crew are blamed for the accident in report on CAA website.All 45 people aboard the aircraft including 4 crew members died in this accident. A person on the ground also died. [7] Accident History  [8] History of Accidents