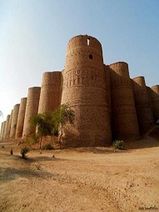 The Derawar Fort is one of such fortresses that can be accessed either from north downwards from Bahawalpur or Ahmed Pur East or from Rahim Yar Khan moving on the Desert Road. The Rahim Yar Khan route is much easier, as it is along a metal road (though midway, where after it turns into a desert track up to the fort), while for other two routes from north downward have quite a distance across desert and one has to have a local driver and guide to access the fort. The rulers and soldiers who lived here and guarded the fort are long gone, and the fort stands alone and deserted, yet the strength of the fort can still be felt from its high rising bastions  which total forty in number’ and are largely intact even after bearing the harshness of the desert winds and temperature.[1] The Derawar Fort Its ramparts are wide and spacious, presenting an imposing structure unlikely to be breached. However, the inside of the fort is a heap of rubble. There are two guns lying in the open, which were once part of the artillery regiment of the Bahawalpur army. Inside some of the rooms, the remains of old furniture and royal dresses can be seen almost destroyed and worn out. Most of the rooms have their roofs fallen and are a pile of rubble rather than reflecting the times of glory and royalty. Derawar Fort is located 100 kilometers (62 miles) from Bahawalpur, Pakistan. This stronghold is the largest and most magnificently sustained fortress of Cholistan. It is a square fort and each wall is 204.8 meters (672 feet) in length, vertically 30 meters (98.4 feet) high and total circumference of its walls is 1500 meters (4921.5 feet). The gate of fortress is on its southern side and is reached by a winding ramp. Most of the bastions of fort present geometric design made by burnt bricks. The strong fort standing over the semi desert is visible from miles around.[2] Located –  Located Hindu Rajput, Rai Jajja Bhati of Jaisalmer was the one who initially built a fort on this sight. The fort remained under the control of royal family of Jaisalmer until 1733 A.D, when, nawabs of Bahawalpur captured this fort. It was then completely rebuilt under the supervision of the Nawab. The fort was lost from the hands of Abbasis owing to Bahawal Khan’s preoccupation at Shikarpur. In 1804 A.D, the stronghold was taken aback by Nawab Mubarik Khan. Apart from Derawar Fort, other strongholds in this network of forts that cuts across the Cholistan Desert include the Marotgarh Fort, the Khangarh Fort, and the Islamgarh Fort. Some of these structures are still standing today, though others have fallen into ruins. Derawar Fort has been considered to be the best surviving example in this group of desert forts.Derawar Fort was apparently built during the 9th century AD by Rai Jajja Bhatti, a Rajput ruler of the Bhatti clan. However, another source states that the fort was built by Rawal Deoraj, a Bhatti Rajput from Jaisalmir, who conquered the area during the 800s AD. As a tribute to himself, the Rajput ruler had several structures, including Derawar Fort, be built. The fort’s name is said to have initially been Dera Rawal, in honor of the victorious king. As time passed, the name of the fort changed to Dera Rawar, and then finally to its modern name of Derawar.[3] History of Fort Abode of the Bahawalpur Rulers

Regardless, Derawar Fort remained in the hands of the Bhatti Rajputs until the 18th century, when it fell into the hands of the Abbasis, a tribe claiming descent from the Abbasid caliphs. In 1733, the fort was captured by Amir Sadeq Mohammad Khan I, the founder of the princely state of Bahawalpur. Although the Abbasis lost the fort in 1747, it was recaptured in 1804. The fort remained as the desert abode of the Bahawalpur rulers (who later adopted the title Nawab) until the 1970s. The fort is still in the possession of that family, and visitors planning to enter the fort would need to obtain a special permission from the Amir (the title adopted following the abolition of the title of Nawab) of Bahawalpur to do so. It was the first Abbasi ruler of Bahawalpur who gave Derawar Fort its current look. After capturing this stronghold from the Rajputs, Amir Sadeq Mohammad Khan I had it rebuilt. This new fort was constructed of clay bricks, with a circuit of walls spanning 1.5 km (0.93 miles), and rising to a height of 30 m (98.43 ft.) Each of the circuit’s fours sides has 10 circular bastions, all decorated with intricate patterns cut into the brick. These walls and bastions are visible from a distance, and provide the fort an imposing presence in the desert landscape. The interior of Derawar Fort, however, is less spectacular today, as the structure has been neglected, and left to deteriorate. Moreover, there is a risk that the monument will fall into ruins, if conservation and preservation work is not carried out in the near future. Inside Derawar Fort a number of buildings provided quarters for Nawab’s army. Quarters of the royal family standing deserted inside the fort are turning to dust. There are shrines of four pious Muslims near Derawar Fort. The Derawar Mosque having four minarets and three domes is exact replica of Moti Mosque at Red Fort Dehli, and was built in 1844 A.D.