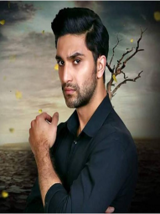 Ahad Raza Mir is a Young and good looking actor, Model, Producer and singer who is in the industry since 2010 and has achieved great success over these years. He is a son of a prominent actor Asif Raza Mir. This article is a blend of information about Ahad Raza Mir biography, Ahad Raza Mir family and Ahad Raza Mir dramas. Did you know that he has been cast in the popular Shakespeare play ‘Hamlet’ in Canada? He just came and ruled the Showbiz industry with his charismatic personality and versatile acting. He is one of those actors who has attained great success in a very short span of time which has made him more humble and submissive. Like all star kids, he too had to bear all the comments which passed on him over all these years as he was often accused of nepotism which he always responds in a gentle way but it would be wrong not to praise his acting skills who is making Pakistanis proud overseas too. He has a massive fan following who are indeed the biggest support system for him.

This handsome actor was born on 29th September 1993 in Karachi, Pakistan but he spent all his life in Canada along with his family.

He has the biggest prop of his family who always uplifts him and cheers him to do better and better. His father Asif Raza Mir is the biggest name in the entertainment industry whose contributions since ages are worth remembering and worth praising. He was and is still one of the most handsome actors of the Pakistani industry while his paternal grandfather was also a part of the industry as a Filmmaker. His mother Samra Raza Mir is the one with whom he is very close. His only brother Adnan Raza Mir is still a college-going, student. His cousin Haroon Shahid is also a Pakistani actor and a singer. He got married to Sajal Ali on 14th March 2020.

Ahad is a well-educated actor who has studied Bachelors in Fine arts from the University of Calgary, Canada.

As a Stage Performer

Ahad began his vocation in 2010, preceding seeking after his training in Canada, with his dad’s production hose A&B Entertainment. He assumed a concise job of Wasif in Hum TV’s sentimental show Khamosiyan. Amid his lone wolves, he began his profession through the stage, performing, coordinating and writing in a few musicals in theater bunches around the Calgary. He played Tony in West Side Story in his college creation of U of C Operetta Company and went onto perform repeating jobs in plays, for example, A Picture with a Bullet, The Tempest, Romeo and Juliet, Macbeth, Bengal Tiger at the Baghdad Zoo and Naughty But Nice; for the later he won the Calgary Theater Critics’ Award for Best Actor which was the biggest achievement for him.

As an Actor in Pakistani Dramas

He made his debut as a singer in the last episode of the 11th Season of Coke studio along with one of the prominent singer Momina Mustehsan but unfortunately, it didn’t go so well and both the singers received backlash not only from the public in fact from many actors and politicians too. The song was the remake of an old popular song ‘Ko Ko Korina’. The response they received was so cold that people actually questioned his decision of trying his luck in the music. He may have set up a worshipped and transcending stature for himself as a performing artist yet his endeavor into the universe of singing with the exemplary Ahmed Rushdi track, may have approached as a mark in his notoriety in the open eye. Apart from that, he is an expert in playing guitar, bass guitar, Cajon, saz, derbake and drums.

Ahad is all set to produce his first-ever film ‘Kaalasha’ which emphasizes the Kalash people’s lives in a Chitral valley. Aijaz Aslam is going to act in a movie while the movie will be directed by Farrukh Turk as mentioned in somethinghaute.com

He has worked with many best brands and style fashioners of Pakistan. He has done numerous photoshoots as a model and he has worked in TV advertisements as well. His sharp and classy looks made it very easy for him to become a supermodel. His shoot with Sajal Ali for diva magazine became a super hit.