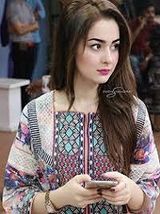 Hania Amir is indeed a beauty with a brain who knows how to fit herself in the Showbiz industry at the top. She has been seen working since 2016 in various projects including dramas and films and the awards which she got are proof of her achievements and popularity. This article contains all the information about her including Hania Amir Biography and Hania Amir Dramas. She is an epitome of beauty, grace, and talent who has marked her place in showbiz in a very short time. She is one of the most desirable and top leading actresses of the new generation. Without having any artistic background still she managed to be at the top purely with her talent and beauty. Her dub smash videos became the biggest reason for her joining the showbiz industry that she used to make for fun.

She was born on 12th Feb 1997 in Rawalpindi. Currently, she still lives there with her family yet often visit Karachi for her shoots.

She belongs to a very decent and well-mannered family from Punjab. Her father hails from Murree side and unreservedly braces his daughter in her career while her mother is a household woman. She has only a sister Eesha who is five years younger than her and is still studying. She was rumored of having in a relationship with Ali Zafar’s brother Daniyal Zafar but currently she and Asim Azhar is sharing a great bond and are often seeing together.

She came in the business exclusively through the intensity of social media where she used to post her dub smash videos only for the sake of fun and without knowing that these videos will make her a big star one day. She had no known contacts in the Showbiz. As time passes her dubs mash got viral on social media From that point, Imran Kazmi who is the maker of Jannan saw her potential and reached her. At first, Hania did not consider the offer important and thought it was a little job. Yet, at that point, she became acquainted with that it was an undeniable supporting job where she was to assume the job of the heroine’s cousin. Her job of Palwasha in Janaan was massively cherished by everybody.

The support of a performer gets demonstrates the chart of their prosperity. Not long after Janaan, Hania was seen embracing Sunsilk. The commercial and Hania were cherished by the crowd. She likewise supports Nestle Fruita Vitals with star-like Ali Zafar and Jazz Cash. She is seen supporting Pizza Hut and was likewise observed working for Bonanza Satrangi.

Her first drama which aired on Urdu 1 is Titli along with Ali Abbas,  Shameen Khan, Emmad Irfani,  Saba Faisal and many others in which she played a role of a greedy and arrogant girl, she actually made people hate her character through her amazing acting. After titli she had been seen in different dramas including Phir Wohi Mohabbat, Visaal, Mujhay Jeene Do with amazing actors including Zahid Ahmad, Ahmad Ali Akbar, Gohar Rasheed, Saboor Ali, and many others.

She is one of those actresses who started her career with Film. Her supporting character in her debut film Janaan along with Armeena Khan, Bilal Ashraf and Ali Rehman Khan made a way for her in the Showbiz after which she got another big film Na Maloon Afraad 2 along with Mohsin Abbas Haider, Fahad Mustafa, and Urwa Hocane. Her film Parwaaz Hai Junoon along with Hamza Ali Abbasi, Kubra Khan, and Ahad Raza Mir managed to earn more than 50 crores in the box office.

She came with a boom and unroll all over the industry. She got her first award for her debut film Janaan as a Supporting actor after which she is seen receiving so many awards in different categories including Hum Award 2018 as a New Sensation Female and Hum Style Award for a Most stylish Film actress.

She has recently shown her new hidden talent to the world by singing the ost of her new drama Anna along with Sahir Ali Bagga and people are mesmerized after listening to her voice as she has sung really well.