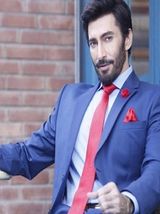 
Aijaz Aslam is an exceptional Pakistani actor, producer, model and designer who is unmatchable and unstoppable. The years that he has given to the industry are worth applauding and worth remembering for a lifetime. This article contains detailed information about him including Aijaz Aslam Biography and Aijaz Aslam Dramas. Aijaz is an evergreen Pakistani actor, model and fashion designer who is ruling the television screens since the 1990s and is known to be one of the bewildering assets to the Showbiz industry. The performances he has given one after another in these years can never be unappreciated or disregarded. He knows how to grasp the attention of the people with his powerful performance. He is known as one of the fittest actors of the industry who is the father of a son and a daughter.

He was born on 3rd October 1972 in Gujrat yet he lived his childhood in Waah Cantt. Currently, he resides in Karachi.

He holds the degree of Fashion designing that he attained from London.