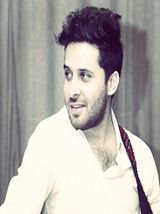 
Haroon Shahid is a Pakistani singer, composer, songwriter, and active actor in the entertainment industry from 2008. He served as a guitarist and lead vocalist in Lahore based band ‘SYMT’, a pop-rock Lahore based band. In 2017 he started his acting career in and afterward appeared in some TV dramas also. He is the first cousin of notable actor Ahad Raza Mir. This article has all the information about Haroon, including Haroon Shahid Biography and Haroon Shahid Family. Blue-eyed Haroon having a captivating personality believes in himself and in being realistic. Knowing his limits, he is well aware of the things he can or can’t do. By spending his childhood listening to Pakistani songs, he decided to pursue his career in music. After winning people’s hearts with his voice, he showcased his acting skills and proved himself as a man with guts. Unlike other celebrities, he has no relationship scandals and is living a blissful life with his family. His drama serial ‘Khaas’ gave hype to his career that he performed brilliantly opposite Sanam Baloch.

His dob is 29th December 1989, and Lahore is his birthplace. He grew up in Saudia. Currently, he is residing in Lahore with his family.

He completed his graduation in Economics and Masters in Public Policy from BNU (Beaconhouse National University) Lahore.

He and his wife Palwasha are parents to a daughter and a son Moosa. Ahad Raza Mir, a sensational actor, is his cousin brother.

He was brought up in Saudia Arabia, where he used to listen to Pakistani songs a lot. His inspiration list includes Fringe Benefits, Vital Signs, Noori, The Sequencers, Meekal Hasan, Collective Soul, Journey, EP, and Junoon. At the age of 17, he 1st time played the guitar.

He started his showbiz career as a singer. He 1st participated in Pakistani music reality program PSI (Pakistan Sangeet Icon), which broadcasted on Indus TV and MTV Pakistan. His different singing style made him famous. He is mostly known as ‘Ganderi Boy’ among music fans because of the remix single of Naseebo’s song ‘Payar De Ganderi’. Although his vocals impressed all but failed to win the event, and got eliminated after singing some classic songs including Jamshed’s ‘Wo Kon Th.’

He served as a vocalist in the pop music brand SYMT. The brand was named SYMT (Direction), as members believed their music should be heard in all directions. The band dissolved in 2016 and brand members were Hassan Omar, Syed Farhad, and Mehmood Rehman.  Hassan played guitar, and Haroon performed as a vocalist while Farhad produced the album at Riot studio and played drums, and Mehmood played bass. Band’s 1st song Zamana was released in 2011.

In 2012 the band SYMT performed in season five of popular singing platform Coke Studio and launched two tunes ‘Koi Labda’ and ‘Tm Kaho.’ Haroon again performed in the 9th episode of ‘Coke Studio’ and sang ‘Baliye’ with Quratulain. Work for Marketing Agency. Apart from singing, acting, and composing, he also worked for a Pakistani company ‘Bramerz,’ a marketing agency and digital media.

He worked in Shoaib Mansoor’s movie ‘Verna’ along with evergreen beauty Mahira Khan. The film is based on the present condition of society and highlights the issues of harassment and rape by powerful and authoritative people. He played the role of a married and complex man Aami. However, CBFC (Central Board of Film Censors) didn’t like the storyline and banned the film claiming that content is defaming the state agencies. But the public started a trending hashtag ‘Unban Warna,’ which led to the uplifting of ban and movie was released.

After catching people’s hearts with his performance in his debut movie, he showcased his acting skills in many TV serials, including ‘Tamana,’ Muqadar,’ ‘Tajdeed E Wafa,’ ‘Do Bol.’  Tajdeed E Wafa was his debut drama, but his role as Sameer opposite to Hira as Gaiti in romantic drama serial ‘Do Bol’ made him a heartthrob.