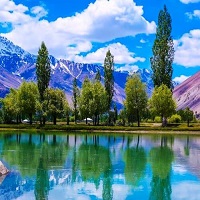 Skardu is the capital of Skardu District, a city located in Gilgit-Baltistan. It is elevated at nearly 2,500 meters in the junction of two rivers, the Indus and the Shigar Rivers. Beyond Skardu is the infamous Karakoram Range, and the Indus River separates the Karakoram from the Himalayas. It is a name taken from the Balti word that refers to high places; Shigar city and Satpara Lake.

The region is typically known as an embodiment of nature, a widely-known spot for tourism with its bountiful nature and its wilderness, including wondrous resorts, lakes, forts, as well as a cold desert. It is an incredibly safe tourist attraction, and though it is open throughout the year, the best time to visit it would be during October-November. 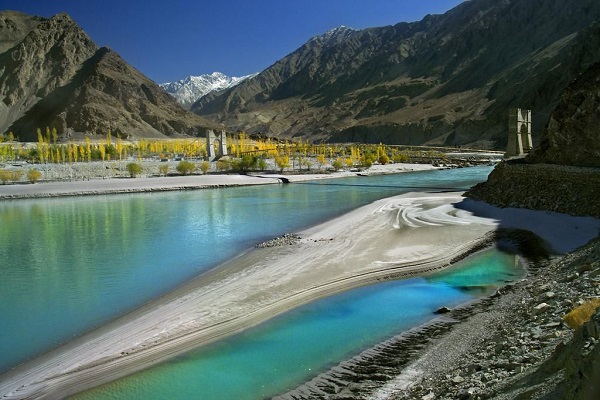 The weather of Skardu is always cold and arid. Due to the fact that vast mountains surround Skardu, it is cold even in the summers. Therefore, the scorching heat of the lowland Pakistan does not reach there. Moreover, there is little to no rainfall because the summer monsoon is blocked by the surrounding mountains.

Moreover, Skardu Weather is extremely cold in winters, and the temperatures vary between 27 degrees to 8 degrees during the April to October season. The lowest temperature recorded was as low as -24 degrees in 1995. The mighty sand dunes can also be seen completely covered in snow during the winters.

Places To Visit in Skardu

There are various Skardu Tourist Spots that you can’t afford to miss. A few of them are mentioned below:

Kachura Village is one of the many Valleys located here, with two beautiful lakes called Upper Kachura and Lower Kachura situated at the height of 2,500 meters. It features a resort at Lower Kachura known as Shangrila Resort, which is a favorable spot for tourists as well as for the locals. The sunrise observed from beyond the mountains is said to be a fascinating sight, more commonly observed while boating.

The water at both the Upper Kachura and the Lower Kachura is as clear as crystal, which allows for a mesmerizing reflection of the surroundings. The ancient trees scattered around the valley are another sight to see.

Kharpocho Fort is one of the oldest sights to see, a 600 years old fort built by a Balti ruler, Ali Sher Khan Anchan. Though it is struggling through its remains, the Fort is still a mesmerizing sight to see. It is, in fact, recommended to look beyond it under the moonlight; its beauty alone renders tourists speechless. Another sight recommended to be watched under the moonlight is Satpara Lake.

Interestingly enough, there is one hotel situated at its bank, half of it submerged in water, leaving only three rooms behind. However, none of it holds a candle to the afterglow left behind by the sun, which sets early in the plains.

Indeed, it is one of the most beautiful sights in Pakistan, with so much to show to the world, its roots enriched with history from hundreds of years ago. 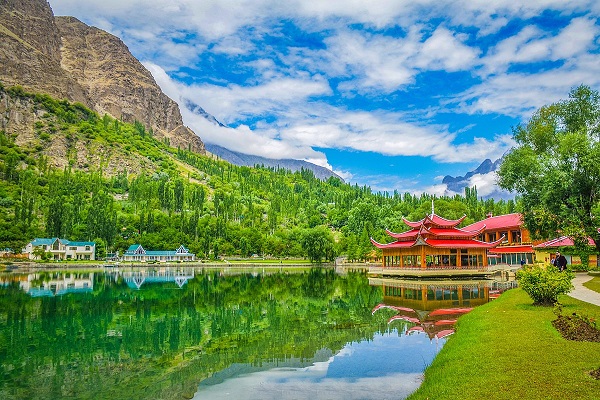 The famous Shangrila late connects with the “Shangrila resort Skardu” which is a marvelous hub for trekking, tourism, and expeditions. Many people have lost their lives while summiting the mountains. Even then, thousands of climbers visit the place from all over the world in hopes to summit the steep climbs that these towering mountains have to offer.

Some areas that lead to those mountains are blocked due to heavy snowfall and extreme winter conditions. Climbers know very well that going on a summit during extremely cold Skardu Weatheris risky and life-threatening. Therefore, they choose not to visit during heavy winters.

Apart from that, the access to K2, Broad Peak, and Gasherbrums is from the Hushe and Askole. They are considered to be the main gates that connect to peaks such as Baltoro. Skardu has become a prominent tourist and mountaineering place. Many developments have been made to make it into a perfect tourist area with many shops, hotels, and restaurants. Other tourist spots include Kachura Lake, Shigar Fort, and Deosai National Park.

Skardu Fort is a historic fortress which is also known as Kharpocho Fort. The Fort is located on top of the city of Skardu, and tourists and view the whole town panoramically. Moreover, the Skardu Fort dated back to the 8th century CE and was built at the end of the 16th century CE by Raja Ali. In addition to that, the Fort used to be home to Skardu’s local Rajas, and now it is a beautiful tourist spot for many tourists that come to visit here.

The design of the Kharpocho Fort is similar to that of the Potala Palace, which is located in Tibet. The Fort is built on the east side of the Khardong Hill, and it seems to protect and overlook the town. An old mosque can be seen inside the Fort built with the arrival of Islam in that area. Unfortunately, the Skardu fort was conquered many times, and therefore, it was destroyed and abandoned in the year 1857.

Satpara lake is the first and the most significant main lake of this region, and it takes only a thirty-minute drive to and from this city. The lake is divided into two ends; one end has a dam constructed next to it, and the other end is where the lake starts from. Moreover, the lake offers tourists fresh trout and row boating.

Satpara Lake accesses all of the drinking water that is provided to Skardu. Basically, the lake is the only essential source of water supply for this city. The lake became more prominent against the rocky terrain after the complete construction of the dam, which created a serene beauty around the Satpara lake. There have been a few setbacks to the natural beauty of the place due to the construction of the dam that has minimized its beauty to some extent.

Nonetheless, it is a beautiful place and a must-see for tourists. Apart from that, the construction plan for the Satpara dam was started in 2003 and was expected to be completed at the end of 2006. But, now, it has been delayed till late 2013 due. The dam provides fresh drinking water for the region’s inhabitants, including Newrangha, Shigari Khurd, and Khlangranga, etc. 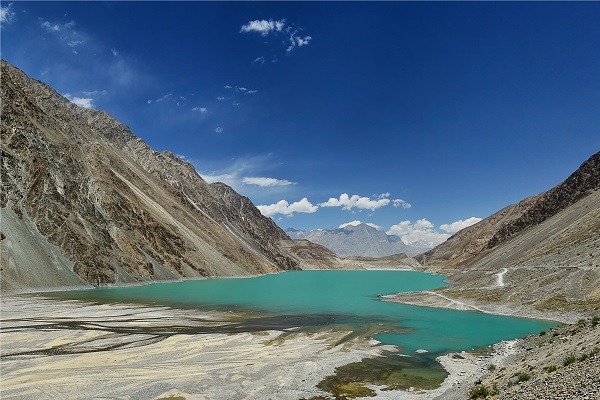 The standard path that leads to this region is the Karakoram Highway. Skardu Road that is denoted as S1, links towards the valley. Skardu Weather can drastically affect the routes leading to Skardu due to heavy snowfall during winters. Once the roads are blocked by snow, the only means of travel is through air.

Due to severe weather conditions, flights are sometimes delayed or canceled. But, the government of Pakistan has decided to upgrade the Airport with new runways, terminal buildings, and access to other facilities that cater to the needs of international flights and passengers.

Furthermore, the airport is equipped with the latest Oshkosh vehicles. The only airline that connects the city with other cities such as Islamabad is Pakistan International Airline, also known as PIA. The Airport is 17.7 km away from the city and has two runways; one is abandoned, and the other one is operational.

Passengers flying on airplanes can see the breathtaking view of the surrounding areas such as the Indus River and mountains covered with snow during the flight. However, only two aircraft, the ATR42 flights, are operational seven days a week. It also offers many facilities to its passengers, such as a refreshment center and a VIP waiting lounge for the following flights from Islamabad to Skardu.

Q: Which province is Skardu?

A: It is the capital of Skardu District, a city located in Gilgit-Baltistan. It is elevated at nearly 2,500 meters in the junction of two rivers, the Indus and the Shigar Rivers. It is a beautiful place with a lot of tourist spots.

Q: Is Skardu open for tourists?

A: It is open for tourists throughout the year, even during the Covid-19 pandemic. However, the routes and flights are closed during severe weather conditions such as heavy snowfall. Moreover, the cost to visit Skardu is between 30 to 40,000 Pakistani rupees for one person.

Q: Is Skardu worth visiting?

A: Yes, it is worth visiting as it is typically known as an embodiment of nature, a widely-known spot for tourism with its bountiful nature and its wilderness, including wondrous resorts, lakes, forts, as well as a cold desert. It is an incredibly safe tourist attraction, and though it is open throughout the year, the best time to visit it would be during October-November.

Q: Is it safe to go to Skardu?

A: The crime rate of Skardu is far less than any four provinces of Pakistan. There have been no cases of robberies, and it is safe for a single person to roam around freely during the day and night.

Q: What is the best time to visit Skardu?

A: It is an incredibly safe tourist attraction, and though it is open throughout the year, the best time to visit it would be during October-November.

Q: What is Lahore to Skardu flight ticket price? 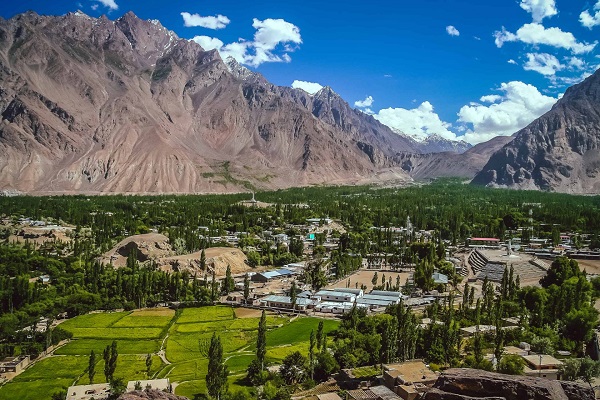