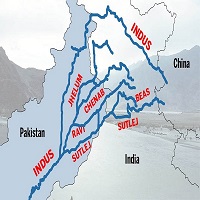 The Indus River is Asia’s transboundary river and South-Asia’s trans-Himalayan river.  This river (1,980 mi) rises in West of Tibet, flows North-West via the Gilgit-Baltistan and Ladakh regions of Kashmir, and turns swiftly to the left after the Diamer massif. The total drainage area of the river is more than450,000 sq. mi.

Its annual flow is about 58 cu mi, double that of the River Nile and 3-times that of the Euphrates and Tigris rivers combined, ranking it among the world’s largest rivers in terms of annual flow. Historically this river has been extremely important to the region’s several cultures.

The 3rd millennium BC had seen the rise of the major Indus Valley Civilization (IVC) of the Bronze Age. This article carries every detail about the river, including Indus River Routes. 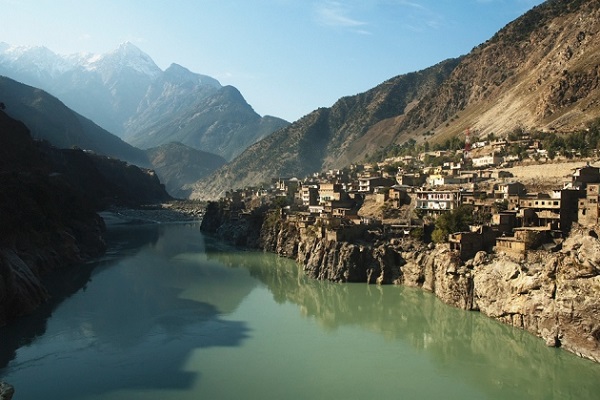 The River Indus supplies principal water resources/supplies for the economy of Pakistan– particularly the breadbasket of Punjab, which accounts for most of the country’s agricultural output, and Sindh.

The term Punjab implies ‘land of 5-rivers’, and these five rivers include Jhelum, Ravi, Chenab, Sutlej, Beas, all of which ultimately flow to the River Indus. This river also supports a number of heavy industries and supplies drinking water in Pakistan.

Tibet is the actual source of the river Indus, which starts at the confluence of the Gar Tsangpo and Sengge Zangbo rivers that discharge the Gangdise Shan and Nganglong Kangri mountain ranges. The Gilgit, Shigar, and Shyok rivers take the glacial water to the main river.

Gradually, it turns to the south and flows down into the Punjab plains at State Kalabagh, Pakistan. The Indus river passes the giant gorges 15,000–17,000 ft deep near the Diamer massif and swiftly flows across Hazara. It’s joined by the Kabul River near Attock.

The rest of its path to the sea is in the Sindh and Punjab plains, where the river flow becomes highly braided and slow.  Panjnad joins it at Mithankot. Once, this was called Satnad River (sat=7 and nadi=river). Passing through Jamshoro, it finishes in a wide delta in Thatta’s South in Sindh, Pakistan.

The Indus is among few rivers that have a bore. The system of Indus is mainly fed by the glaciers and snows of the Karakoram, and Himalayas, and Indian states, Himachal Pradesh and Ladakh Union Territories, and the Gilgit-Baltistan Area of Pakistan.

The river flow is also influenced by seasons–it decreases considerably in the winter season, while in the monsoon months from July to Sep it floods its banks. There is evidence of a gradual change in the direction of the river since the prehistoric period. 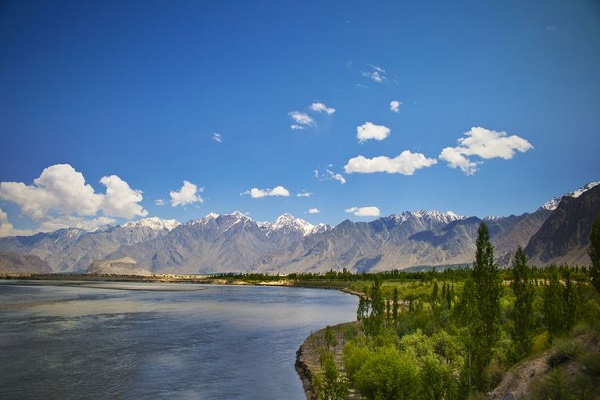 This river was named Sindhu in the Sanskrit language by Indo-Aryan individuals, and Persians knew it as Hindu, which was considered by both as ‘Border River.’ From the 1st Persian Empire, the name transferred to the Hellenes as Indós. Romans adopted it as Indus.

Franklin C. Southworth proposes that Sindhu’s name is originated from Cintu, which is a Dravidian term for date palm, a plant that is frequently available in Sindh.

The main cities IVC, like Mohenjo-Daro and Harappa, trace back to about 3300 BC and represents some of the biggest known human habitancy of the ancient era.

The IVC expanded from north-eastern Afghanistan to North-Western India and Pakistan, rising from River Jhelum’s East to Rupnagar on the upper River Sutlej. Coastal settlements expanded from Sutkagen Dor in Pakistan, the border of Iran, to Kutch in India.

To date, more than 1,052 settlements and cities have been discovered, primarily in the Ghaggar-Hakra region and its tributaries. Among those settlements were the main urban areas of Mohenjo-Daro and Harappa, as well as Dholavira, Rakhigarhi and Lothal, Ganeriwala & Only forty sites in the Indus Valley & its tributaries have been found.

The Sutlej, which is Indus’s tributary now, flowed into the River Ghaggar-Hakra in the Harappan period, and in its watershed, there were more Harappa alongside Indus. 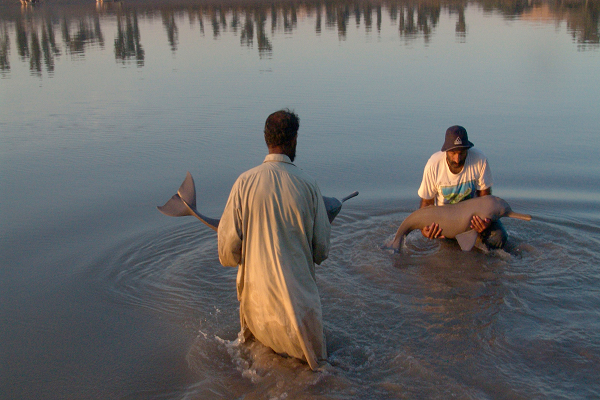 Most scholars agree that settlements of Swat culture of Indo-Aryan progressed in Gandhara when Harappa and Mohenjo-Daro had been abandoned already. The Rig Veda mentions a number of rivers, including the one called ‘Sindhu.’  The ‘Sindhu’ is believed to be the current Indus River.

It is confirmed one-hundred and seventy-six times in its writing, ninety-four times in the plural, and most commonly used in the broad context of ‘river.’

The ‘India’ word is originated from the river Indus. In ancient days, ‘India’ basically referred to those areas directly along the eastern embankment of the Indus.

The lower Indus basin creates a natural border between the Persian Plateau and the subcontinent; this area includes all or some parts of KPK, Sindh, Baluchistan, Punjab and India, and Afghanistan. The 1st Western Eurasian dynasty to conquer the Indus Valley was the Achaemenid Empire, during the rule of Darius I.

Later, the Indus Valley was governed by the Kushan & Mauryan dynasties, the Indo-Greek empires, the Hephthalites & Indo-Scythians. Over many centuries, the Muslim military forces of Mehmood Ghazni, Muhammad bin Qasim, Mohammed Ghori, Babur, and Tamerlane managed to cross the river to conquer Punjab and Sindh and provided an entrance to the subcontinent. 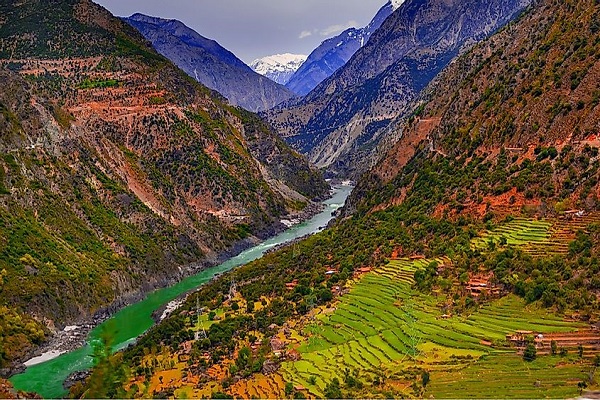 The River Indus feeds the Indus underwater deltas, the Earth’s 2nd biggest sediment body. It comprises about five million km3 of material that has been eroded from mountain ranges.

Sediment studies of the new river show that the Karakoram Mountains ranges in northern India and Pakistan are the single biggest source of sediment, with ‘Himalayas’ supplying the next highest contribution, mainly through the large Punjab Rivers (Ravi, Jhelum, Sutlej, Chenab, and Beas).

In the Nanga Parbat zone, the substantial amount of erosion caused by the River Indus following rerouting and capture via that area is believed to bring the lower & middle crustal deposits to the top.

Excessive deforestation & interference of humans with the Churia Hills ecology have resulted in a marked reduction of vegetation. The regions of the Indus Valley are barren with low vegetation. Agricultural production is largely maintained due to irrigation systems.

The River Indus and its river basin have a high level of biodiversity. It is habitat to about twenty-five species of amphibians.

The Indus river dolphin is present only in the River Indus. It’s a sub-species of the Dolphin River in South Asia. Formerly, the River Indus dolphin also existed in the tributaries of this River. According to WWF (World Wildlife Fund), it is among the most endangered cetaceans, with just one-thousand remaining in existence. 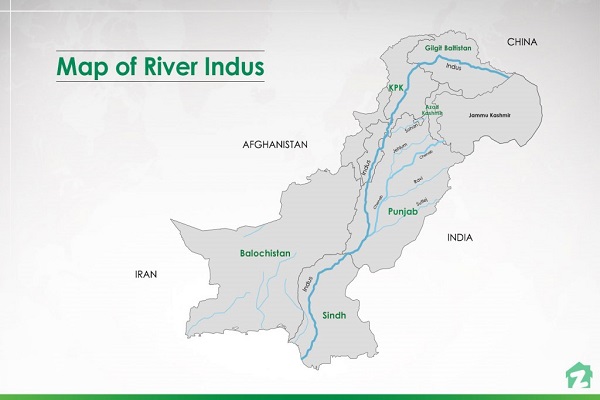 The basin of River Indus is rich in diversity, home to over one-hundred and eighty species of freshwater fishes, including twenty-two found nowhere.  Fishes played a significant role in the region’s earlier cultures, including the older IVC (Indus Valley Civilization), where there were frequent depictions of fishes. Following fish species are found here:

The Indus is the largest provider of water supplies to the Sindh and Punjab plains and is the backbone of food and agricultural production in the country. The river is particularly important because of the inadequate rainfall in the lower valley.

The irrigation waterways were 1st constructed by the inhabitants of the IVC, and subsequently by the engineers of the Mughal and Kushan Empire. 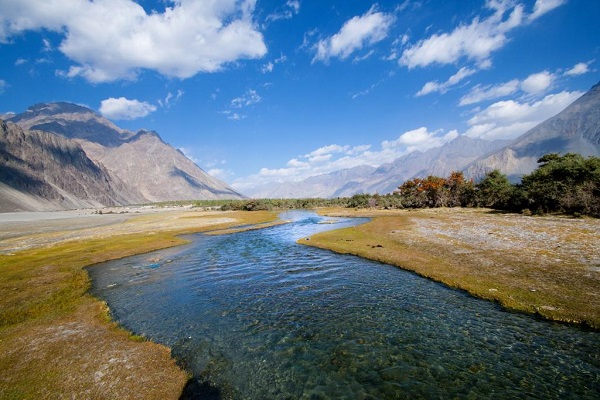 When Pakistan was founded, a water management agreement signed between Pakistan and India in 1960 ensured that Pakistan will obtain water from the River Indus and its tributaries, the River Jhelum and the Chenab, independent of the upstream managed by India.

Construction of Tarbela and Mangla

The Indus Basin Plan mainly consisted of the development of two major dams, the Tarbela Dam built on the River Indus and Mangla Dam on River Jhelum along with their secondary dams. The WAPDA has undertaken the construction of the Jhelum-Chashma link Canal-connecting the waters of Jhelum & Indus Rivers-supplying water to Multan and Bahawalpur.

Irrigation works, barrages, and dams have been built on the Indus River since the 1940s. The irrigation system of Indus Basin is the largest integrated irrigation system built in the past one-hundred and forty years.’ This decreased the water flow and by 2018, the total annual water flow underneath the Kotri barrage was forty-three billion yd3.

Furthermore, the annual volume of the discharged slit was calculated at ninety-eight million tons. Resultantly, Pakistan’s 2010 floods were viewed as a good thing for the population and ecosystem of the river delta because they provided much-required freshwater.

Consequences of Changes in Climate

The Himalayan Plateau houses the world’s 3rd largest ice store. Qin Dahe, the ex-head of the Chinese Meteorological Department, stated that rapid rate of melting and higher temperatures would be good for tourism and agriculture in the brief period, but cautioned clearly:

‘Temperatures are increasing 4 times higher in China, and Himalayan glaciers are falling faster than anywhere else in the world. In the near future, this would cause the lakes to greatly expand and cause mudflows and flooding. In the long term, glaciers are important to support systems for the River Indus. Once they disappear, Pakistan’s water supply will be in danger.’

Over time, industries on the banks of the River Indus have raised levels of water contamination inside this river and in the environment around it. Elevated concentrations of toxins in the river have contributed to the deaths of endangered dolphins in the Indus River.

Frequently, the River Indus is vulnerable to mild to extreme flooding. In 2010, after unusually heavy rains, the River Indus surged far above banks and began flooding. These rains continued for two months, destroying vast regions of Pakistan.

At the beginning of August, the heaviest floods moved to the south along the River Indus from the severely damaged northern areas to western Punjab and destroyed at least 570,000 hectares of cropland and the south of Sindh.

The Sindh floods of 2011 started during the monsoon in mid-Aug 2011 as a result of excessive monsoon rains in eastern Baluchistan, southern Punjab, and Sindh. The floods did significant damage, approximately 434 lives were lost and 5.3 million individuals and 1,524,773 houses affected.