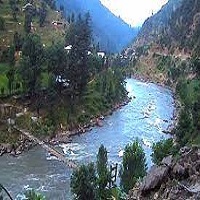 The Neelum River is located in the Valley of Neelum, Azad Kashmir, Pakistan. From Muzaffarabad to Athmuqam, the river covers a total distance of 250 kilometers in the territory of Pakistan. The water of the river flows from Indian Occupied Kashmir and enters Pakistan where the glaciers of the Himalayas contribute to the water of the river.

From its origin, it flows through the Neelum Valley which is a beautiful tourist spot for local and international tourists. Moreover, there are a number of canals constructed on the river in Pakistan and the water is used by the locals for irrigating crops.

In addition to that, the water is also used by the people for drinking purposes. A dispute on the water of Neelum is going on between Pakistan and India as India is violating the treaty of the water. This article covers all the information including Neelum River Origin. The name of the river “Neelum” which means “Blue” is either given to the river due to its sky-colored blue water or a ruby stone named “Neelum” founded in the region. Neelum River, which is also called the Kishanganga River, flows through Indian-occupied Kashmir and Azad Kashmir.

The water of the river starts flowing from the glaciers of Kashmir. Then it flows through in Indian territories of Jammu – Kashmir, Badoab, and Dras. It enters the Line of Control between Pakistan and India and flows through Gurez Sector. Upon entering Azad Kashmir, the glaciers of Azad Kashmir contribute to the water of the river which finally joins the Jhelum River.

There are many streams formed due to the glaciers which serve as tributaries to the river and forms it in Indian Territory and flows through the Line of Control between Pakistan and India. Upon entering Pakistan, many streams which flow from the glaciers of mountains in Azad Kashmir contribute to the water of the river and joins the Neelum River.

There are a total of two roads which is used by the locals and tourists for traveling purpose. One road is entered to Neelum through Muzaffarabad while the Julkhad road is entered the valley through Kaghan. Furthermore, the valley of Neelum starts from Chalhana and spread through the beautiful greenery of Taobutt. The region is also famous for forested high and sloppy hills. The river has great importance and has a great economic impact on Pakistan. Recently, a 969 Megawatt Hydro Electric Power Plant is installed by the government of Pakistan which contributes to providing electric power to the people of Azad Kashmir and specially Muzaffarabad.

Furthermore, there are not enough canals on the river in Pakistan but the water of the river contributes to the greenery and forests of the region through leakage/ seepage.

Furthermore, the Indian government would divert the water of the river to Wular Lake through a 24 kilometers long tunnel at Bandipur and will finally fall into Jhelum River.

Similarly, a 969 Megawatt Hydro – Electric Power Plant is installed by the government of Pakistan which is named Neelum – Jhelum Power Plant. The project of hydropower was awarded to a Chinese construction company. 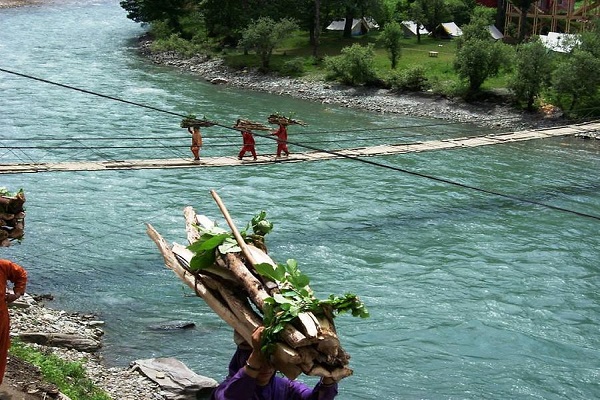 Many canals are excavated by India and Pakistan among which some are as follow:

There are many villages on both sides of the river among which some of the famous villages are given below.

The river flows through the valley of Neelum which is one of the most beautiful, green, and attractive tourist spots in Pakistan. Neelum Valley is compared with Heaven by tourists and thousands of tourists visit here to see the beauty as well as the greenery of the valley. The tourists of Kaghan, Chitral, Kalaam, and Hunza pass through Neelum Valley and stay for some time to entertain the nature of the region.

Furthermore, there are many other attractions as well as ancient sites including the Dosut Village of Neelum and many other regions in Kashmir. A number of aquatic lives is existing in the river including fishes and tortoises. People also do fishing in many areas where the river flows. Different species of fishes is founded in the river which includes the following.

A dispute is going on between Pakistan and India on the water as the river originates in India and passes through Pakistan. A treaty has been signed between Pakistan and India on the water which is known as the Indus River Treaty (Sindh Thaas Muaahida). The treaty defines that Indians have no right to block the water which is violated by the Indian government and decided to install a hydroelectric power plant which will result in water blockage.

The number of Talks between Pakistan and India did not bring fruitful results and Pakistan announced to build a hydroelectric power plant on River Neelum which is named Neelu, – Jhelum Hydro Electric Power –Plant.