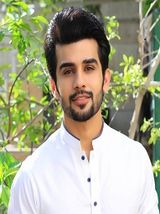 
Fahad Sheikh is a multi-talented skilled man who is in the industry for a long time. He is a Pakistani actor, singer, VJ, model, and host and is struggling to mark his name in the Showbiz Industry. This article contains detailed information about Fahad Sheikh biography, Fahad Sheikh wife and Fahad Sheikh songs. Fahad is one of the most handsome and multi-talented artists of Pakistani industry who is not only an actor, in fact, a singer, host and a model too. This handsome and good looking artist has the capability to portray his skills in every field. He is an accomplished actor, a good looking model, a skilled full host, and a melodious singer. Fahad did his graduation and then started his professional life to achieve his goals. This man has indeed a long way to go. He has a great association with Fahad Mustafa.

He was born on 22nd February 1989 in Lahore, Pakistan but currently, he resides in Karachi for his work.

Fahad got married in 2012 to Mahreen Fahad Sheikh who is a daughter of one of the most prominent names in the industry Shahida Mini who has contributed a lot in the entertainment industry and has given super hit films and got appreciated by receiving National and International awards. Mahreen herself run a fashion brand Fs clothing. The couple announced the birth of their son on their social media in 2015.

He began his showbiz career by hosting a roadshow ’11 Number’ broadcast on Style 360 channel. He additionally facilitated ‘Shahida Mini Show’ of PTV which depended on legends and advanced new ability. He is blessed with great Hosting skill.

He is indeed one of the most handsome actors of the Pakistani entertainment industry who is seen in many super hit serials including ‘Mubarak Ho beti hui hai’ along with Saboor Ali Saima Noor, Sajid Hasan, Sabreen hisbani, Mariam Ansari and many other and ‘Mera Yaar Miladay’ starring Faysal Qureshi, Sajal Ali and Ahmad Ali Akbar. His current ongoing dramas ‘Khudparast’ with Shahzad Sheikh and Ramsha Khan and ‘Bandish’ with Hira Salman, Marina Khan, and Zubab Rana are receiving overwhelmed response from the audience. He has also been a part of Lollywood movie ‘Na Maloom Afraad 2’.

He has worked with many best brands and style fashioners of Pakistan. He has done various photoshoots as a model and he has worked in TV advertisements as well. His sharp and classy looks made very easy for him to become a supermodel. He is the brand ambassador of Jazz Jazba. He is also seen on the cover of many well-known magazines. He is additionally head of Marketing and Public Relations of driving creation place of Pakistan ‘Huge explosion Entertainment’.

He made his singing presentation with melody ‘Mahiyaa’ which turned into a colossal hit and video of this tune wound up viral on social media. From that point onward, he sang numerous effective melodies including ‘Old Jawani’ and ‘Intezaar’. The actor is blessed with a melodious voice.