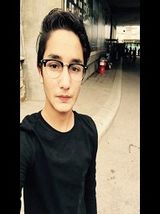 Zuhab Khan is one of the most flexible and famous child stars of our showbiz who is in the industry since 2009. He is all set to become the next superstar of the industry. This article is detailed information about Zuhab Khan biography, Zuhab Khan family and Zuhab Khan dramas. Zuhab is one of the most versatile and good looking child stars of the showbiz industry since 2009 when he was only 8 years old. It wouldn’t be wrong to call him an upcoming superstar of the industry. He has marked his place in the industry over these years with his versatile acting without having any artistic background. He is pursuing his professional and educational life side by side.

He was born on 4th May 2001 in Karachi. Currently, he still resides there with his family.

Zuhab Khan father Saleem Khan and mother Ambreen Khan are indeed proud parents who are overwhelmed with the success which their son got in these years. He has 1 brother and a sister who are not the part of showbiz yet.

He is one of those actors who started their journey of showbiz through modelling. He first appeared on the screen in 2009 in a Television commercial. After that, he was seen in many advertisements and also did photoshoots for different prominent magazines.

He gave his first appearance on small screen in 2012 in a drama serial ‘Omar Dadi Aur gharwalay’ starring Humayun Saeed, Ahsan Khan and Arisha Razi which aired on ARY digital. He became the most loved child start in a short span of time due to his acting and cuteness. His character in ‘Malika-e-Aliya’ was appreciated by many people. He has worked in many super hit serials including ‘Daldal’ along with Zahid Khan, Armeena Khan, Muneeb butt and Kinza Hashmi, ‘Bholi Bano’ along with Syed Jibran, Hiba Bukhari and Hajra Yamin.

He made his Lollywood debut in 2015 by offering a voice to the character ‘Saadi’ of the energized film ‘3 Bahadur’ which eared really well on the box office and by acting in the motion picture ‘Abdullah: The Final Witness’. He again offered a voice to character ‘Saadi’ in ‘3 Bahadur: The Revenge of Baba Balaam’. He became more recognizable after his movies.