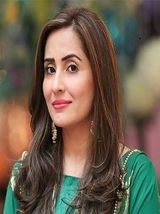 Sabreen is a good looking Pakistani actress and a model who started her journey in 2005. Before joining showbiz she was an Air hostess in an airline company. She is one of those accomplished actresses who always prefer to do diverse roles instead of doing main leads. She has been a part of many successful dramas as a supporting actress which has given her much acclaimed and appreciation.

She was born on 14th July 1982 in Karachi, Pakistani and completed her studies from Karachi. Currently, she resides in the same city

She was born to Altaf Sheikh in Karachi. Her mother was also the part of showbiz who was a lokh Sindhi singer and a prominent Pakistani actress. Her stepsister Sanam Baloch is an accomplished and prominent Pakistani actress and a Host of a morning show. Other than Sanam she has 1 younger sister Ganwa Baloch who is not the part of the industry. She has 2 younger brothers Farhan Baloch and Abbas Baloch. Her brother in Law Abdullah Farhat Ullah (husband of Sanam) is also a part of the industry but the couple is no longer together.

Other than an actress she is also a wonderful model she has walked on ramp multiple times for huge and prominent designers. She did and is doing many photoshoots for huge brands and magazines. She has appeared in various Television commercials also.