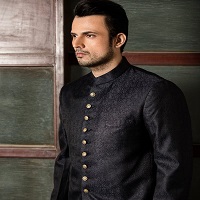 Usman Mukhtar is a young and handsome man of the showbiz industry who might have done less work, yet his every role has been impactful and prominent. He started with the movies and made his small screen debut with the drama serial Anaa. His on-screen chemistry with Naimal Khawar was highly admired.

Usman is undoubtedly one of the most significant additions, which is also a director and cinematographer apart from being an actor. His mother, Nasira, has also served as an actress and acted in more than 100 Pakistani movies. He had a strong desire to become an actor, but he never thought about it because of not having family support. He got married to Zunaira in 2020. Usman is one of those names that people wish to see on the screens more often. He is a blazing actor, a handsome model, and also a director who gave a super small screen debut, and people loved his magnificent performance of Altamash. He was fond of joining Showbiz since childhood but couldn’t get enough support from the family.

However, he didn’t give up on his passion and joined theatre after taking proper education. Usman surely knows how to make an impactful entry on the screens and make people hooked to their screens. Undoubtedly, he is an astounding cinematographer whose music videos also got recognition in Hum Style Awards in the past.

He was born on 27th July in 1985 in Rawalpindi, Pakistan, but he currently resides in Karachi for his work.

He holds a degree in Journalism.

Usman belongs to an artistic family as his mother, Nasira was one of the finest actresses of the industry and was very prominent during her time. She used to show up mostly in the negative roles. He is the only brother of 1 sister.

He did Nikkah with Zunaira Inam in March 2021 in a small ceremony due to COVID. Usman Mukhtar wedding functions started on 20th October 2021. His powerful energy on his Mehndi surprised his fans. He surely rocked the floor on some dance moves with his friends Osman Khalid Butt, Mairaj, etc.

Usman started his career by acting in theaters. He has been a part of many popular theater plays including ‘Pawanay 14 August’. After 2007 he took a break from Showbiz till 2016 when he came to a romantic musical film ‘Janaan’ as a supporting actor. The cast includes Bilal Ashraf, Armeena Khan, and Hania Amir. The movie received much acknowledgment and recognition at the box office.

In 2018 he came with another amazing movie ‘Paarchi’ starring Hareem Farooq, Ahmad Ali Akbar, and Ali Rehman Khan. The Cinematography of the film was also done by Usman.

In 2019 he made his small-screen debut with a serial ‘Anaa’ that on air on Hum Tv. The cast of Anaa features Hania Amir, Shehzad Sheikh, and Naimal Khawar. The drama became the blockbusters of 2019. Later, he was seen in the drama serial Sabaat opposite Sarah Khan.

In 2021, he was again seen as the lead opposite Mahira Khan and Kubra Khan in the drama serial Hum Kahan Ke Sachay Thay. The serial is getting all the hype for all the good reasons. During his acting break, he has directed various music videos and short telefilms. He has directed ‘Aashiqui’ which is the modification of the Bollywood film ‘Gangs of Wasseypur’. Afterward, he also directed a music video of Abdullah Qureshi’s ‘The Whistle Song’.

He has worked with many best brands and style fashioners of Pakistan. He has done a number of photoshoots as a model and he has worked in TV advertisements as well. His sharp and classy looks made it very easy for him to become a supermodel.