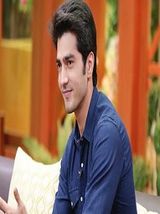 
Shehzad Sheikh is a handsome Pakistani actor and a Model who is a part of the Showbiz Industry for a long time and has gained millions of followers with his powerful performances in various serials. He is a son of legendary Javed Sheikh who is one of the assets of Showbiz. This article contains detailed information about him including Shehzad Sheikh Biography, Shehzad Sheikh Family and Shehzad Sheikh Dramas. Shehzad is a handsome Pakistani Television and a Film actor who is ruling the Television screens like his father Javed Sheikh for a long time. He was impassioned and intense towards acting since childhood because of having an artistic background so soon after completing his education he stepped into the Showbiz to establish his own place in the industry. He is one of the developing, splendid and brilliant actors in the showbiz field who is giving a tough competition to other actors. The performing artist is well known for his acting, enchanting and great looking style.

He was born on 26th September 1982 in Karachi where he spent all his life. Currently, he resides in the same city with his family.

He did his schooling from the city School. His passion for acting since childhood forced him to obtain a degree in acting so he went to the New York Film academy to attained the degree in acting and Film making.

He belongs to an artistic and legendary family who has a big name in the entertainment industry. He is the only son of Javed Sheikh and Zeenat Mangi both considered national fortunes in Pakistan’s Showbiz industry. His sister Momal Sheikh is also one of the prominent names of the industry while his wife Hina Mir is a lawyer by profession. The couple is blessed with a son Shahmir Sheikh and a daughter. His uncle  Behroze Sabzwari is also a big name of the industry while his cousin Shehroze Sabzwri and his wife Syra Yousaf are also prominent figures of the Showbiz.