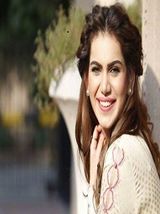 
Ghana Ali is the leading name in the Drama industry who is in showbiz since 2015. She has appeared in a number of serials as a supporting and leading actress for which she has been nominated several times. This article contains detailed information about her including Ghana Ali biography, Ghana Ali family and Ghana Ali drama List. Ghana is a staggering and astonishing Pakistani actress and a model who is in the industry since 2015 since then she remained a part of many super hit Pakistani dramas. She came to the showbiz industry on her own talent and hard work without having any artistic background. The young actress is single and fully devoted to her career. When we talk about beauty with a brain then the name which instantly comes in our mind is sure of Ghana.

She was born on 24th January 1994 in Lahore, Pakistan but currently, she resides in Karachi for her work.

She belongs to an ordinary family without having any link to showbiz. Ghana Ali’s sister Hira Zeeshan Malik recently got married in Lahore in a family-oriented function. Her other sister Axa Tahir is a financial Analyst- Chartered Accountant and a Fashion Enthusiast. She shares a very special bond with her niece Veresha Khan.

She made her acting debut in 2015 with a drama serial ‘Ishqaway’ as a supporting character along with Sami Khan, Rabab Hashim and Sonia Mishal which aired on Geo Channel. She gave her best debut in that serial for which she received much regard and admiration. In the same year, she was blessed with 3 more other serials including ‘Aap Ke Liye’, ‘Sangdil’ and ‘Dharkan’. She is one of those actresses who fit in every character which she plays whether it’s positive or negative. Her serial ‘Sun Yara’ in which she portrayed a negative character (Starring Zarnish Khan, Junaid Khan, Minal Khan and Hira Salman) was loved by many people.

She made her debut in Lollywood with the movie ‘Rangreza’ which aired in 2017 got good reviews on the box office. The main leads in the movie are Urwa Hocane, Gohar Rasheed and Bilal Ashraf. After 1 year in 2018, her other movie ‘Maan Jao Na’ starring Adeel Chaudhry, Ayaz Samoo, Hajra Yamin and Asif Raza Mir was released. Recently she is busy shooting her other movie ‘Kaaf Kangana’ starring Sami Khan, Ayesha Omar, and Resham. The movie will release in 2019.

She has been a part of modeling for endless best style originators and planner brands of Pakistan. She has done numerous photoshoots as a model. She has decorated the slope of various nearby just as the worldwide style appears as a work of art. She has been a piece of various style weeks and bridal couture weeks. She has additionally walked on-ramp for many fashion designers.