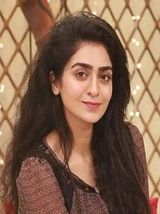 
Hajra Yamin is the leading name in the Drama industry who is in showbiz since 2010. She has beein in a number of serials as a supporting actress and in movies too. She also did theater for so many years. This article contains detailed information about her including Hajra Yamin biography, Hajra Yamin career and Hajra Yamin dramas. There are very few actors in the industry who acknowledge what ‘acting’ is extremely about and attempt to be a performing artist first and a star later. She is an extremely gorgeous and talented Pakistani actress and model who is often seen doing supporting characters yet succeded to mark her name in the hearts of people. She is unmarried and fully focused on her career as she has a long way to go.

She was born on 6th April 1986 in Karachi, Pakistan. She spent her childhood in Islamabad but later moved to Karachi with her family.

She holds a degree in Communication and Media Studies which she Studied from Roots College International and Fatima Jinnah Women University, Rawalpindi. After completing her education she started her professional life and became an actress which she always wanted to be.

She is one of those actresses who started acting from the theater in 2011. she is indeed one of the most versatile actresses we have in our industry who always prefer diversity in roles instead of the main leads. She remained the part of many well-known production houses of a theater. She was also the part of legendary Anwar Maqsood’s play ‘Siachen’. She is a self-made actress and is very committed to her work.

She made her debut on a small screen in 2016. She has worked in a number of serials as supporting characters including ‘Tau dil ka kya hua’  starring Ayeza Khan, Sami Khan, Imran Ashraf, Zahid Khan. She was also seen in a drama serial ‘bholi bano’ on GEO channel which also got good ratings. Her character in a drama serial ‘Pujaran’ made her an accomplished actress of the industry. Her recently ongoing drama ‘Baandi’ starring Muneeb Butt, Aman Khan, Hina Dilpazeer and Yasir Hussain is giving a very strong social message to the viewers.

She made her debut in Lollywood in 2018 with the film ‘Maan Jao Na’ featuring many fine artists including Adeel Chaudhry, Ayaz Samoo and Ghana Ali. The film went well at the box office and got good reviews from the viewers. Her second feature film ‘Pinky Memsaab’ was released on 6th December 2018 that received a great response from everywhere further she also bagged the nomination of Best Actress in Lux Awards.

Hajra has been a part of modeling for endless best style originators and planner brands of Pakistan. She has done numerous photoshoots as a model. She has decorated the slope of various nearby just as the worldwide style appears as a work of art. She has been a piece of various style weeks and bridal couture weeks. She has additionally walked on-ramp for well-known fashion designers.