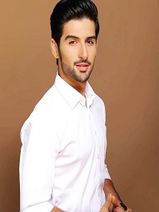 
Muneeb Butt is a good looking Pakistani actor and model and definitely an upcoming superstar of our Showbiz industry. The young sensation has worked in a number of serials and with each passing serial he has enhanced his acting skills and has enlarged his fan following list. This article contains detailed information about him including Muneeb butt Biography, Muneeb Butt Dramas, and Muneeb butt family. Muneeb is a young Pakistani Actor and model who entered in the showbiz field a few years ago. He is considered to be one of the most handsome actors of the Pakistani Showbiz Industry. A kind-hearted, polite and enthusiastic man is giving his hit performances one after another and it’s not at all a surprise for his fans. The passion for acting made him entered the showbiz soon after completing his Education.

He was born on 14th April 1992 in Karachi where he grew up. Currently, he still resides there with his family.

He holds a degree in Media Science that he attained from the Iqra University.

He belongs to a traditional family without having any artistic background. He has 3 siblings including a brother and 2 sisters. He got married to Aiman Khan who is another rising star of the industry in 2018. Their marriage became the talk of the town because of extended events. His sister in law Minal Khan is likewise a Pakistani actress and model. The couple is blessed with a daughter which they named Amal Muneeb.