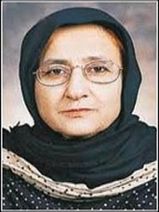 Bilquis Bano Edhi, wife of Abdul Sattar Edhi, is a humanitarian, a social worker and one of the most active philanthropists in Pakistan , holds the honor of being awarded the prestigious ‘Hilal-e-Imtiaz’, and with her husband received the ‘1986 Ramon Magsaysay Award for Public Service’. She is also the recipient of the ‘Lenin Peace Prize’. Her charity runs many services in Pakistan including a hospital and emergency service in Karachi.
Bilquis Edhi – the young lass who was not very good at studies, joined the nurses training course at the Edhi Nurses Training Centre when she was in the 8th grade. Later Abdul Sattar Edhi proposed to her and they got married in April 1966. Since then, she has been working with the Edhi Foundation – A Foundation which was started by Abdul Sattar Edhi with the mission to provide aid to Pakistan’s poor and down-trodden has become Pakistan’s major relief organization under the leadership of the husband and wife – team of Abdul Sattar and Bilquis Edhi. Today, in addition to services provided in Pakistan, Edhi foundation is a major resource for assisting victims of disaster internationally.
Abdul Sattar Edhi’s possessions at the time of his marriage were a broken old car and a small dispensary. There was a maternity home on the first floor with 6-7 beds, a small room – 6’ X 6’ on the ground floor which served as an office and a similar room on the first floor. There wasn’t much else but even in those days when the newly wed couple had very limited resources, people used to leave their kids with them and Bilquis Edhi used to look after them.
Bilquis Edhi vividly remembers her first major experience at Edhi Foundation, when during the war; the bombings resulted in a number of brutally mutilated bodies which she had to wash for burial. At times only an arm, leg or head was recovered.  She, along with about 60-70 workers including voluntary workers, collected and then washed these bodies.
Her current responsibilities include looking after the ladies section, giving away children for adoption – mostly looking after women-specific and children related sections throughout Pakistan. Her two daughters also work closely with her. She regularly visits Edhi Homes all over Pakistan to monitor their activities and give suggestions and recommendations on how she feels the work should be done. She is also instrumental in making Edhi Homes ‘Centers of Excellence’ – in the true sense of the word.With regard to child adoption, she makes sure the criteria are fulfilled to approve / disapprove of couples who want to adopt a child. Couples who want to adopt a child are interviewed by Bilquis Edhi. Her criteria for adoption are that even after 10-12 years of marriage the couple is still childless, prospective father’s salary should be reasonable, prospective father should not have alcohol or drug-related problems, prospective mother’s age should be younger than 50 and the couple should own a house. Her foundation doesn’t give children to couples who keep changing their house – keep moving from one place to another. Kids who are physically or mentally disabled are cared for by Edhi Foundation. They have a separate section for them where they clean them, feed them, play with them etc. The kids remain with them for the rest of their lives. Aside from the disabled children, the other children who don’t get adopted do not pose any problem, whatsoever. Edhi Foundation has over 4,000 applications in hand. They don’t have enough kids to give to people. So they are careful in selecting prospective parents. They have a ‘shariat-nama’ in place which they make the parents sign where it is explicitly mentioned that in case of separation between the parents, the Centre will reclaim the child or let the child stay with the mother.Bilquis Edhi is honored to be the life-partner of a person whose love for humanity is ‘larger than life’. After the kids grew up and got married, Bilquis Edhi’s mother passed away. The couple spends their days and nights at the Edhi Centre. In their 36-37 years of married life, there may have been at least 36 occasions when they never even came home at night. Even now when their children want to see him, they bring lunch from their home and come and eat with them.[2] Bilquis edhi biography The history of establishing the Edhi child adoption centre and childcare services dates back to 1949. Mrs. Bilquis Edhi is supervising and looking after the caring and feeding of babies and children. For this purpose, exclusive cradles have been placed outside all Edhi Centres, across the country with a view to keep the abandoned and illegitimate babies in these cradles.
Mostly these abandoned newborn babies are provided to the childless couples, who in accordance with our own policies, after ensuring that they are fully deserved and exactly suitable for this noble cause. Bilquis Edhi, after completely going through the background of the couples, and undertaking a rigorous screening process she decides that the couple or the family is precisely suitable for the baby adoption.On annual basis, Edhi Foundation is giving over 250 babies or children for adoption.  Till to date, over 23,320 babies and children have been provided to the childless couples and families.[3] Child adoption center Bilquis finally gives in to the crowd and starts meeting the visitors, wailing ‘Aye Maa ’. She speaks in Kutchi Memon language to most women but it is clear that all women are sharing the many ways Edhi touched their lives. “He was my saviour on many fronts,” Bilquis tells one woman. “I can’t believe he is dead. He isn’t. I feel he is sitting downstairs somewhere.”
Zeenat, an Edhi Foundation social worker, tries to gives her hope. “Have faith in your Lord,” she says. “Look he earned his paradise on earth by his actions and his deeds,” said another.
Two young women, Humaira Faiz Muhammad and Sarah, enter the room and Bilquis makes the effort of introducing them to those present in the room. “They looked after him when he was completely unwell during his final days,” she says.
Some of the mourners are reciting the Holy Quran while the rest are reciting the first Kalma. The men on the floor below and the street outside are also reciting the first Kalma, a practice to send away as many blessings as possible with the deceased. Their voices are echoing inside the house.As she manages to control her sobs, Bilquis recalls her husband fondly. “Because of him so many girls got married. So many homes he built for people. Just think how many lives he has built over the course of so many years.”It is when her youngest son, Faisal, enters the room that Bilquis breaks down again, urging him to join her in mourning. “I will cry. Don’t worry I will,” he tells his mother, before letting her know that they will be taking Edhi’s body to National Stadium for the funeral prayers. “I appeal to everyone present in this room to pray for the departed soul,” he says. “Pray that Allah accepts all his kind actions and deeds and that the name Edhi stands tall in these tough times ahead of us.[4] Abdul sittar edhi our own abou ben adhem

Speaking to Geo News, Bilquis Edhi said: “We never even celebrated his birthday while he was alive.”
“We were unaware of the day he was born. I pray for him every day. Today I will make extra effort to pray for the departed soul,” added the globally acknowledged humanitarian’s wife.Discussing the future direction of Edhi Foundation, Bilquis Edhi said it continues to operate as smoothly as it was while Edhi was alive. “Edhi Foundation’s operations did not stop even on the day he (Edhi) passed away.”“Faisal will take some time to fill his father’s shoes,” she said.
Edhi passed away on July 8, 2016. Google honoured the philanthropist on his 89th birth anniversary by changing its logo to a doodle or illustration of the humanitarian.  [5] Bilquis Edhi on the humanitarians 89th birthday Bilquis Edhi, the wife of Abdul Sattar Edhi of Edhi Foundation, has been selected for Mother Teresa Memorial International Award-2015 for sheltering Geeta, a differently-abled Indian girl who was stranded in Pakistan, The Economic Times reported.
“In view of the noble and humanitarian act of sheltering our dear Geeta, a deaf-and-mute woman who had accidentally crossed into Pakistan, the Harmony Foundation Board has unanimously decided to honour Karachi-based Bilquis Bano of the Edhi Foundation,” the foundation’s chairman and activist Abraham Mathai said.Bilquis Edhi has been honoured along with global humanitarian aid provider Medecins Sans Frontieres (MSF).The Edhi foundation had looked after Geeta for over a decade and till her recent return to India.
Bilquis Edhi and MSF representative Leslie Shanks have accepted the invite to come to India and receive the award instituted in memory of the late Mother Teresa at an event scheduled on November 22.[6]Bilquis Edhi named for Mother Teresa Award