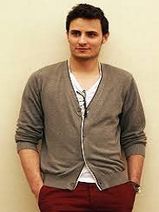 
Osman Khalid butt is an accomplished and a good looking Pakistani actor, Model, Choreographer, Writer and a host too who is seen hosting award functions. He had a dream of joining Showbiz since Childhood due to his artistic background. He is half french. This article contains all the information about him, including Osman Khalid Butt biography and Osman Khalid Butt dramas. Did you know that he is a son of Pakistani actor and screenwriter, Dr. Khalid Said Butt? When we talk about beauty with a brain with multiple talents, then it will be wrong not to mention his name, who is inspiring everyone for a long time by showing his hidden skills one after another. Usman Khalid Butt is a brilliant actor, a handsome model, an incredible dancer, a remarkable film writer, and a great host too. Despite having an artistic background, he has achieved all the success based on his talent and diligence. Being born in a general family, he had liberation to live in his dreams and to fulfill them in the future, so after completing his education, he stepped into the Entertainment industry.

He was born on 9th Feb 1986 in Islamabad, where he spent all his life with his family. Currently, he is living in Islamabad and Karachi.

Usman Khalid holds the degree of Telecom Engineering that he attained from FAST- NU, Islamabad.

He was born in an open-minded family where his father, Dr. Khalid Said Butt, is a well known Pakistani actor, director, and screenwriter. His father has worked both Nationally and Internationally. His mother, Saira Fatima Butt, is an educationist from France. His brother Omer Khalid butt is a news anchor while one of his cousins, Rabya Chaudhry, is likewise a talented Pakistani actress, model, comedian, singer, and performer. Indeed talent runs in his genes. Osman is still single.

Osman Khalid showed his writing skills to everyone when he got a chance to write the story of a Lollywood film ‘Siyaah’ in 2013, which was directed by Azfar Jaffri. The film did the business of 2.65 crores at the box office. In 2016 his another film ‘Janan’ as a writer released which is a romantic comedy starring Hania Amir, Ali Rehman, Bilal Ashraf, and Armeena Khan. The film got a wonderful response and earned 30 crores at the box office with a budget of 11 crores.