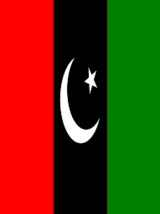 The Pakistan Peoples Party (PPP) is a progressive, federalist party founded in 1967. Zulfiqar Ali Bhutto was the founder Chairman and the PPP’s manifesto may broadly be categorised as social-democratic. Zulfiqar Ali Bhutto, a giant of Pakistan’s political landscape and history, was martyred in 1977. His daughter, Benazir Bhutto, over a political career spanning three decades managed, against all odds, to match her father’s charisma and was also his equal in the impact that she had on many millions of her fellow citizens, particularly the youth, the poor and women. Benazir Bhutto was martyred in 2007 during a campaign rally in Rawalpindi. With characteristic bravery she had returned to the country to take on the military regime ruling at that time. She is referred to as Mohatarma Shaheed out of respect for her achievements and her martyrdom. Today, her son Bilawal Bhutto Zardari, a young man with fresh ideas and the emotional charisma of the late Zulfiqar Ali Bhutto heads the Party.[1]  PPP Pakistan People’s Party (PPP) was founded on November 30, 1967 by Zulfikar Ali Bhutto, who became its first chairman and later Prime Minister of Pakistan.

PPP is the largest political party of Pakistan. The party has been active in Pakistani politics since the separation of East Pakistan and later gained much popularity and support during the era of Zulfikar Ali Bhutto. The party won the 1971 elections on a socialist mandate of ‘Roti, Kapra, Makan’ (‘bread, clothes, shelter’). PPP took control of the country after the 1971 war. After the first parliamentary term, PPP secured a victory in the 1977 elections to rule for another five years. Opposition parties claimed that the election was heavily rigged by the PPP. Tensions mounted and despite an agreement reached between the opposition and PPP, martial law was imposed in the country by Gen. Zia ul Haq.

Bhutto was hanged in 1977 after a controversial trial, in which he was found guilty of murdering a political opponent. His daughter Benazir Bhutto was elected twice as the prime minister but her government was dismissed both times on corruption charges.

Initially PPP was a socialist nationalist party as Zulfikar Ali Bhutto wanted closer ties with China and more attention paid to the lower classes. Benazir Bhutto on the other hand adopted conservative privatisation policies in order to secure funding from the United States and the World Bank.

Although twice elected prime minister, Benazir Bhutto was criticised for corruption and extra judicial killings. Bhutto was sworn in as prime minister for the first time in 1988, but was removed from the office 20 months later on grounds of alleged corruption by president Ghulam Ishaq Khan. In 1993 she was re-elected but was again removed in 1996 on similar charges, this time by President Farooq Leghari.In 2002, PPP Parliamentarians was formed as an electoral extension of the Pakistan People’s Party (PPP) for the purpose of complying with electoral rules governing Pakistani parties. The party was formed to accomplish few goals which remained the highlights of PPP’s manifesto. Faith in Islam, democracy, eradication of feudal system and peasantry and empowerment of general people are the salient features of PPP’s political stance.

The PPP currently holds 126 seats in the National Assembly and 27 seats in the Senate. It is the current government of Pakistan. It forms the provincial government in Sindh and is the official opposition in Punjab. In the Angus-Reid pre-election polls of 22 December 2007, it was in first place, with about 30 per cent of the vote. The party continues to be a major power broker and has a strong base in rural Sindh and Punjab. Zulfiqar Ali Bhutto launched Pakistan Peoples Party after leaving Ayub’s Cabinet. In the general elections held in December 1970, PPP won a large majority in West Pakistan but failed to reach an agreement with Sheikh Mujib-ur-Rahman, the majority winner from East Pakistan. Following the 1971 War and the separation of East Pakistan, Yahya Khan resigned and Bhutto took over as President and Chief Martial Law Administrator on December 20, 1971.[3] Zulfiqar Ali Bhutto Pakistan’s Benazir Bhutto (1953-2007) was the first democratically elected female leader of a Muslim country during a tumultuous life that ended with her assassination. The daughter of Pakistan Peoples Party (PPP) founder and Prime Minister Zulfikar Ali Bhutto, Bhutto took over as chairperson of the PPP in 1982.Bhutto spent several years in exile in London. She returned to Pakistan with plans to participate in the 2008 general election, but was killed during an attack at a PPP rally in late 2007.[4]  Benazir Bhutto Former President Islamic Republic of Pakistan.Mr. Zardari’s political career spans two decades. He served as a Member of the National Assembly twice (1990-1993 and 1993-1996), as Federal Minister for Environment (1993-1996), and as Federal Minister for Investment (1995-1996). In 1997, he was elected Senator and served in that capacity until the dissolution of the Senate in 1999.In 2008, Mr. Zardari was elected President of Pakistan. Under President Zardari, the PPP’s candidate Syed Yousaf Raza Gillani was unanimously elected Prime Minister of Pakistan.[5]  Asif Ali Zardari My mother used to say: Democracy is the best revenge”, Bilawal said this in a firm tone when he was made the Chairperson of “Pakistan Peoples’ Party”, after her mother Ms. Benazir Bhutto was assassinated in Rawalpindi on 27th December, 2007. ‘Bilawal Bhutto Zardari’ is the eldest of the three children of former Prime Minister of Pakistan Benazir Bhutto. He was born on 21st September 1988. Bhutto was a feudal lord from background but his politics was centered on socialism. He based his party manifesto on four things:

The model of this political party, more or less, matched the manifesto of Chinese Communist party.Bhutto gave one slogan “Roti, Kapraa aur Makaan” that gained much support for PPP in elections 1970.[7]  Four Major Fact

Launching the membership drive, Bilawal invited all the progressive Pakistanis on 22 jan 2018, especially the youth and women to fill the membership form and join the ideology working for a peaceful, progressive and prosperous Pakistan.
The PPP chairman launched the membership campaign at a press conference at the Media Cell of Bilawal House. PPP Secretary-General Nayyar Hussain Bukhari, PPP Sindh and Balochistan Presidents Nisar Ahmed Khuhro and Haji Ali Madad Jattak respectively, Senator Sherry Rehman, Maula Bux Chandio, Members National Assembly (MNA) Nafisa Shah, Nasir Shah, Waqar Mehdi and others were also present on the occasion.
Giving out the details, Bilawal said that the membership campaign will be conducted door-to-door, through camps and also by utilization of modern communication technology of the internet and cellular networks. The website (www.pppmember.com) and SMS will also offer membership option so as to reach out to the maximum number of people.
PPP chairman said that membership drive has been designed to reduce the gap between him and the workers, adding that following the successful completion of the drive, he would be able to communicate directly with the workers and the members through the modern means of communication.The party members would be able to register a complaint on the website against any party leader, and this would ensure transparency in a better way. [8] Membership Drive