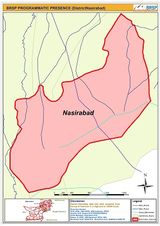 Nasirabad is named after the great Baloch leader Nasir Khan Noori, the founder of the Baloch Confederation. He ruled the Kalat Khanate from 1747 to 1794.The district was notified in 1974. For three years, from 1987 till 1990, the district was known as Tamboo. Tamboo is a small village 40 kms west from the district’s head quarters Dera Murad Jamali.[1]  Nasirabad Nasirabad is a district in the centre-west of Balochistan, Pakistan. Nasirabad’s headquarters are at Dera Murad Jamali. Its original name was Temple Dera, named after Captain H. M. Temple, a career British civil servant, who served as the Political Agent for Sibi from 1891 to 1892. Among the local population it is still known as ‘Tipul’, a corruption of the word ‘temple’. The District was notified in 1974. For three years, from July 1987 to December 1990, it was known as Tamboo District. Tamboo is a small village 40 km west of Dera Murad Jamali. The district has two sub-divisions, D.M. Jamali and Chattar.[2]  History

The district is administratively subdivided into four tehsils, these are:

These tehsils are further divided into union councils. Currently, there are 31 union councils and one municipal committee in the district:

Tehsils and Unions in the District of Nasirabad

Here is the list of tehsils and unions of Nasirabad district of balochistan.[4] Tehsils and Districts