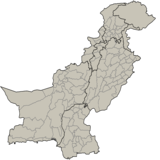 Loralai (Pashto: لورالائی‎) is the principal city of Loralai District in the northeast of Balochistan province in Pakistan. It was formerly known as Bori. It is 4,700 feet (1,400 m) above sea level.The name of the district is derived from the Loralai stream, a confluent of Anambar or Nari, to the north of which the town of Loralai is situated, the headquarters of the district.[1] Loralai- balochistan.gov  Tehsil Loralai is the major city of the district while tehsil Duki and Mekhtar are major towns of the district. It is connected by road with Quetta, Ziarat, Zhob, Pishin, and Dera Ghazi Khan.The surrounding region consists of a series of long, narrow valleys hemmed in by rugged mountains varying from 3,000 to 10,000 feet (1,000 to 3,000 meters). Loralai District was formerly known as Bori. It is inhabitated by Pashtoon tribes such as Kakar, Nasar and Luni. The district was created in October, 1903. The present boundary of Loralai district comprises of three Tehsils namely Mekhtar, Duki and Bori Tehsils. The early history of the area comprising the present Loralai District is shrouded in obscurity and can only be surmised from the general history of Balochistan. About 1383 AD, the Maliks of the Kurat Dynasty who swayed the scepter in Kandahar, succumbed to Amir Timur, and Kandahar together with other areas constituting the old Ghaznavid Kingdom fell into the hands of the latter. These territories which were conferred by Timur on his grandson Pir Muhammad, and which are mentioned as extending to the frontiers of Sindh, would presumably have included the Loralai District. Babar, after conquering Kabul, made a move towards India and on his return via Sakhi Sarwar passed through Balochistan. The province remained under the Mughals until 1559 AD, when it passed into the hands of the Safavid kings of Persia under whose reign it remained until 1595 AD. It was than again acquired by Emperor Akbar. Under Akbar regime, the territory of Duki which was generally garrisoned, formed one of the dependencies of Kandahar province and provided a contingent of 500 horses and 1000 foot soldiers, besides other contributions. In 1622 AD, Kandahar again passed to the Safavids when Shah Abbas conferred the Government of Pishin and its tribal dependencies, which probably also included Duki, upon Sher Khan Tarin.

Later Emperor Shah Jahan made great efforts to regain the province of Kandahar from the Safavids and with this end in view, in 1655 AD, sent a large expedition consisting of over 104,000 men under his elder son prince Dara Shikoh. After a lengthy investment, Dara Shikoh had to abandon the siege of Kandahar and returned. This was the last attempt on the part of Mughals to regain Kandahar which was now lost to them for ever.[2] In 1559 AD

Before the British Empire Before the arrival of the British, the area from Sibi to Loralai was called Thal-Chutiali. Then It was divided into two parts through Sibi district. The rationale beyond this division was probably to govern and control the Pashtun and Baloch population separately. The present Zhob Division comprises six districts, Qila Saifullah, Zhob, Sherani, Musa Khel, Barakhan and Loralai.[3] Loralai- “ BBC Urdu The Durranis were followed in about 1826 AD, by the Barakzais under the first Amir of Afghanistan, Dost Muhammad, and almost the entire district came under the nominal rule of this dynasty. According to the Treaty of Gandamak, signed on the 25th May 1879 AD Duki and Thal Chotiali land with other parts of Balochistan passed into the hands of the British. The British camp was shifted from Duki in 1880 due to its strategic location and military importance. Loralai is an important junction coming from Afghanistan via Zhob, Fort Monroe via Punjab and Balochistan via Quetta to Ziarat. These days Loralai is the regional headquarters of paramilitary Frontier Corps.Loralai has been the district headquarters since 1903. It has consisted of different regions in different times. Loralai currently consists of three tehsils: Tehil Loralai(Bori), Tehsil Mekhtar and Tehsil Duki. Makhter become tehsil with the great accesses of Tehsil Nazim Bori Molvi Abdullah Hamzazai. The population is approximately 0.34 million as per 1998 population.[4] Profile: Northern Balochistan It is mostly inhabited by Jalalzai,Utmankhail, Kakar, Luni, Tarakai(lilizai), Tareen and Kakar tribes with many sub branches is the majority in the current district.Before the settlement of new city, it was mostly inhabited by tribes whose occupation was animal husbandry and this 80 mile wide area was known as the Bori valley. But the British renamed it after the small river Lai and that is why it is called embankment of the (river/stream) Lai(Loralai). Many NGOs are working in Loralai district initially for the Afghan refugees and host communities and now for the whole resident communities. Mercy Corps, an International humanitarian organisation has recently started its ECTB program in Loralai along with five other districts i.e. Barkhan, Kohlu, Musakhel and Ziarat. ECTB program is intended to provide free test and diagnosis for the patients of killer disease Tuberculosis. Mercy Corps will also start many other projects from reproductive health to HIV & AIDS control program in its future plans for the district of Loralai. This project of ECTB is funded by the European Union and implemented by Mercy Corps. Some other local NGOs are also working in the region like LAFAM,Association For Heath Development(A H D)which is working on malaria and has started its free medical camp in D H Q hospital Duki in collaboration with directorate of malaria control program and remained its camp open as long as malari being controlled in the area. WRANGA and many more. Wrang is a pashto language word which means ‘beam of light.[5] NGOs – NGOs All kinds of fruits and vegetables are cultivated in this district. Loralai is especially famous for its almond and apple production. Loralai is also rich in marble and its marble tiles are gaining popularity throughout the country. A lot of marble trimming factories have been established in the district and it now provides marble tiles to various parts of the country. The major source of income for the common inhabitants is agriculture and farming.and also for marble industries . nasrullah marble and mining co one of the company from area it is working since 1998 .[6] Resources – Resources

The town, which is situated 4,700 ft (1,400 m) above the sea level in which the wealth of the inhabitants is derived from their herds of cattle and other animals also. The district is also popular in the business of items especially vehicles smuggled here through Afghan Transit Trade. All types of vehicles are smuggled to Loralai and then to the other parts of the country after being customed or duplicated in papers here.

The population of Loralai district was estimated to be over 700,000 in 2005. The vast majority of the population of Loralai district are Pashtun with Kakar and nasar as majority tribes. The district offers a great blend of mixed tribes from all parts of Pakistan. Some major tribes of Loralai have migrated from the parts of Zhob like Batozai, Jogezai, Jalalzai and Musazai & Some Afghan refugees who have permanently settled in the region are Nasar,Sulemankhail,Tarakai,Tokhai,Andar etc.. About one fourth of the population is Baloch. There major tribes are Marri and Buzdar, who mostly dwell on southern and western portions of the district.[7] Demography of Loralai District Loralai city has its own radio broadcasting station and mobile coverage of three operators. With the completion of the Loralai-Dera Ghazi Khan road, many people see a much more brighter and prosperous future for the district since the travel to DG Khan is important in many ways like the transportation of cash crops and food crops and coal loaded trucks from Chamalang coal mines. The road in under construction between Wagum Rud and khajuri since long. Now the fresh contact has been awarded to FWO and fresh date for its completion is December 2008. All coal loaded trucks heading to Punjab and other areas travel on this road.

Mercy Corps stoped their oprations in Loralai region due to there internal problems. Some other local NGOs are also working in the region like LAFAM,Association For Heath Development(A H D)which is working on malaria and has started its free medical camp in D H Q hospital Duki in collaboration with directorate of malaria control program and remained its camp open as long as malari being controlled in the area.in 2010, the RAHA-RAA-UNDP alos started theire operations in Lralai region, the programe is mostly for refuges affected communities which is located in Kach UC, WRANGA Foundation is a implementing partner in the area with RAHH-RAA-UNDP. Wranga is a pashto language word which means ‘beam of light’. now WRANGA is going to open and estiblished their offices in Kohlu, Barakan, Musakhail and ziarat.[8] Development – Development There are many Governmental and Public High, Middle and Primary School at District Loralai.
There are also Many Islamic Institution at Loralai.