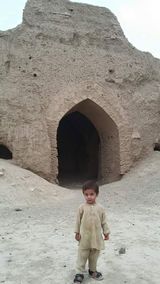 Kharan is a town in Kharan District, Balochistan, Pakistan. It is located at 2835’0N 6525’0E with an altitude of 692 metres (2273 feet).The ancient name of Kharan was Karan or Qaran. According to the historian Istakhari, its name was Qaran after the name of the Qaran or Barfen mountains. The Koh-i-Kharan is also mentioned in Kitab-i-Masalik-o-Mumalik. The ancient name of Kharan was Karan or Qaran. “According to the historian Istakhari, its name was Qaran after the name of the Qaran or Barfen mountains. The Koh-i-Kharan is also mentioned in Kitab-i-Masalik-o-Mumalik”. [1] Background – Background The early history of Kharan is obscure. It is mainly a record of the fights and forays in which the chiefs and the inhabitants were continuously engaged. Being poor and barren, it did not tempt any of the conquering nations which from time to time in the 14th century A.D. conquered other territories. It is said that the Nausherwanis were in power in the north east of Iran. Chaotic conditions were then prevailing in Iran and the ruler of that country considered them responsible for this. Accordingly they were compelled to migrate towards Sistain, bordering the present Kharan District. It is said that the first man who entered into Kharan from this tribe was Mir Abbas Khan. The Nausherwaris spread over the entire area and selected Rakhshan (present Basima) as their settlement. Prior to the entry of Nausherwanis, the Rakhshan area was dominated by the Peerakzais. Mir Abass entered into matrimonial relations with this tribe and afterwards gained control over the Peerakzais tribe. Mir Azad Khan surrendered his sovereignty to the British Government in 1884.[2] Kharan- balochistan.gov In Kharan the (dome) Tomb of Mausolea is built of burnt bricks. Its form is that of ordinary Iranian tombs i.e a square chamber surmounted by a dome. There are numerous gimbals found scattered in the district.
Another set of remarkable archaeological remains are the Gabarbands or Zoroastrian dams which are found in considerable numbers at Raskoh, Gorr and Siahan ranges. They bear evidence of different physical conditions than those that are prevalent today. [3] Archaeological sites and historical monuments

The present inhabitants of Kharan attribute the erection of Gabarbands to the fire worshippers. These dams are terraced fields and legend says that the inhabitants who built them brought all the soil in bags which they carried on their backs from the desert to the south. These Gabarbands were built to contain the rainwater in the terraced plots and the deposition of fertile alluvium on the otherwise rocky soil. This wonderful old system is also seen at Quetta, Kalat and Karachi highway. The great archeological explorer Stain has described Gabarbands as master-pieces for conservation and utilization of rain or snow water.[4] Inhabitants  of Kharan

All tribes residing in Kharan, except the Nausherwanis, designate themselves to outsiders as Kharani Baloch. Most of the Baloch who are indigenous inhabitants of Khanran apply the term Rakhshani to themselves. It includes the Muhammad Hasnis and is applied locally to everyone living in the plain area. The Sasolis and Samalaris of the hills consider themselves Brahvi. The Nausherwaris as a race are strong and possess handsome features. They are known for their hospitality. They are religious people. The Muhammad Hasni possess oval features, high noses and whitish complexion. The Rakhshanis can be distinguished by their hazel eyes.[5] balochistan.gov- Info

Chairman District council of Kharan, Mir Sagheer Badini has blamed Balochistan government for discriminating Kharan district in release of funds
District Chairman made these allegations while addressing a press conference in his office, on Monday.
Mr. Badini claimed that Balochistan government has released funds of Rs. 18 million for every district except Kharan. He termed this decision as a gross injustice with people of Kharan.
“Deputy Commissioner (DC) of Kharan is using government machinery for his vested interests,” alleged Mr. Badini. “If current DC is not transferred within a week then Local government councilors and office bearers will lock their offices and quit serving,” warned District chairman Kharan.[6] More Imformation About Kharan District