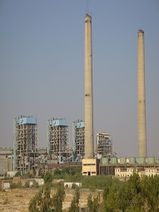 Jamshoro  is a city and capital of Jamshoro District, Sindh, Pakistan. Jamshoro, the site of largest University residential campus in the country, situated about 18 kilometers from Hyderabad on the right bank of River Indus, was a rather desolate hilly track until 1955 when it was selected for the establishment of Sindh University Campus. The site was selected to be a University township away from the humdrum of Hyderabad city which lacked room to meet the ambitious expansion programs of the University.

Interestingly, Jamshoro is virtually the gate-way to the Indus Valley, now world-famous for its civilization and rich cultural heritage. The Ranikot Fort is located 40 km. to the north of the campus, in the northward continuation of the same hilly track which become Laki Ranges, merging with the Khirthars northwards. Amri, an important archeological site, lies about 15 km. further north. Sehwan, a well known township lies 25 km. to the north of Amri. Mancher Lake the largest fresh water lake in the region, is situated to the west north west of Sehwan. Travelling about 150 km. Jamshoro district is part of Hyderabad division. It was created in 2004 after dividing Dadu district. Jamshoro district is located on very important place. Its boundaries are connected with Balochistan, Karachi, Hyderabad and Nawab Shah. The district headquarter of Jamshoro is Kotri City. While Jamshoro city is known as educational Hub. Jamshoro University is located there. The total area of district is 11517 square Kilometers. River Indus floes on his eastern side. The estimated population of district was 1177000 persons in 2001. The spoken languages are Urdu 6%, Sindhi 84%, Punjabi 4% and Pashto 3%. The town of Sann is also located in this district this is known for the residence of Ghulam Murtaza Shah Syed was known as G.M Syed. He born in 1904 in Sann and died on 25 April 1995.[1]  Details Jamshoro  district  was  split  from  Dadu  district  in  December  2004. It is situated on the west bank of River Indus. The district borders with Dadu district in north, Thatta district in south and  Karachi   in   south   west.   The   district   comprises   four   talukas   namely Kotri, Manjhand, Thana Bula Khan and Sehwan.

District  Jamshoro  is  slightly  hotter  than  surrounding  areas  in  summer  and  has  cool  winters.  The  district  is  rich  in minerals like limestone, gravels and marbles. The Kharif crops produced in the district are rice, cotton, sugarcane, bajra and maize. The Rabi crops are wheat, Barley, gram, pulses and oil seeds.

Two  out  of  four  talukas  have  industrial  estates  in  this  district.  The  industrial  state  in  TalukaKotri  consists  of  160  factories. This industrial estate employs a large number of people from all over the country. TalukaThanoBula Khan has an industrial state in Nooriabad along superhighway, which consists of 72 industrial units but where only 42 units are functional  and  providing  employment  to  its  inhabitants  and  outsiders.  Mining  is  also  a  source  of  income  for  the  inhabitants of this taluka.[2] Jamshoro Industry Katcha area alongside the Indus River is the main agriculture production area where vegetables are grown abundantly.
Some of the areas in Sehwantaluka are irrigated by Dadu canal. [4] jamshoro Irrigation The population of the district of Jamshoro  increased from the figure of 582,094 in the year 1998 to 1,176,969 in the year 2011, an increase of 102.2 percent. Roughly, 95 percent of the Population of the city contains immigrants from several parts of interior Sindh who moved to the town in around the time period of 1948-2001 and to a lesser extent from the time period of 2002-2014 decades. Therefore, the city holds various diverse Sindhi clans and ethnic groups mainly from Jamshoro District,   Sukkur District, Dadu District, Larkana District, Khairpur District, Nawabshah District, Umarkot District, Matiari District,  Shikarpur District, Tharparker, Naushahro Feroze District, Badin District and Jacobabad District. The city is primarily Sindhi. Ranikot Fort is an ancient fort near Sann, Jamshoro District, province of Sindh, Pakistan. Ranikot Fort is also called as The Great Wall of Sindh and is considered to be the world’s greatest fort with a circumference of nearly 26 kilometers (16 mi). Since the year 1993, it has been on the tentative list of UNESCO World Heritage Sites.[8]  RaniKot Fort

Tehsils or Talukas of District Jamshoro There are five Talukas or Tehsils in district Jamshoro they are.