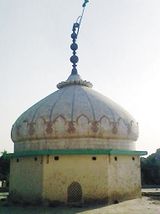 Abdul Hakeem also famous as Abdul Hakim is a city in Kabirwala Tehsil, Khanewal District in the Punjab province of Pakistan. The city is located 10 kilometres from Tulamba and is 3 km from the Ravi River and 28 km from Mian Channu.The tomb of Saint Abdul Hakeem is located in the city centre near Multan road.

The top event in the city is the yearly Urs of the Saint Abdul Hakeem, held every year from June 21st to 23rd.Thousands of the followers of the saint visit the tomb, and a Grand Lok Mela and the Lucky Irani Circus take place during the Urs.

The city has an old head-work on the historical river Ravi, and a canal named Fazil Shah and a small link canal that are used for irrigation.Important in the city is a 450 MW Rousch thermal power plant working at Sidhnai Barrage in Abdul Hakeem.The city has the only railway station in Kabirwala Tehsil, similar to the other 3 Tehsils of Khanewal District.The population of the city depends on agriculture, and there are wheat، rice and cotton factories and flour mills in the city.

The residents of this city do not adhere to any one political party. Every new election here is won by a different party.

Khanewal is the district of the Abdul Hakeem city and Khanewal is famous district of Punjab Province of Pakistan. Khanewal was made a separate district in 1985 and comprises the tehsils of Khanewal, Kabirwala and Mian Channu, the last of them being the hometown of the late Ghulam Haider Wyne, a one-time provincial chief minister.[2] Khanewal District

Kabirwala is the tehsil of Abdul Hakeem city.Kabirwala is presently a tehsil headquarters situated just 10km away from its district headquarters, Khanewal.[3] Kabirwala Tehsil The town is the headquarters of Kabirwala Tehsil, an administrative subdivision of the district. National Reconstruction Bureau, Government of Pakistan Kabirwala was 118th biggest city, with a population of over 684,000.[4] Population

Abdul Hakeem Motorway ( Pakistan Point News – 05th Sep, 2017 ) has been completed and the project would be completed next year. National Highway Authority Spokesman Kashif Zaman told APP on Tuesday that the 230km long Lahore-Abdul Hakeem (M-3) had been divided into four parts and being constructed by two contractors through a joint venture of M/s China Railway 20 Group and M/s ZKB. The total cost of the six-lane motorway project is Rs 148.654 billion and its design speed is 120km per hour, he said.

He said that eight interchanges, eight bridges over major roads, 35 bridges over canals, and six underpasses and 316 culverts have been constructed. The project was started in February 2016 and was to be completed in August 2018. But, following the instructions of the prime minister, both companies accelerated the pace of work in a competitive environment and the project would be completed in March 2018, almost five months ahead of the completion date. He said with the completion of project, travel distance from Lahore to Multan would be reduced to 2.5 hours. Its interchanges would be located near the cities of Nankana Sahib, Samundri, Rajana, Pir Mahal, Darkana, Jaranwala, Mangatanwala, and Saigan.[5] Abdul Hakeem Motorway