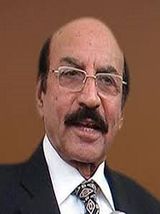 Syed Qaim Ali Shah is a famous face for Pakistanis. He is a renowned politician who has been serving district of Khairpur. He is a politician of influential background who has been associated with the politics of Sindh for years. Not only this he has been a firm representative of his party policies over media and has interacted with people through media. He is the voice and a famous face of his party. He belongs to famous, mainstream, democratic political party that has long years of struggle for restoration of democracy and against the dictatorship. His outlook speaks a lot about his seniority. He is currently serving as the leader of house which is a really responsible position.[1] Biography Shah acquired his early education in Khairpur district of Sindh. He acquired his LLB degree from Karachi’s Sindh Muslim Law College. He started practising law in his native city of Khairpur.[3] Education

He started his political career by joining Pakistan Muslim League.He contested former military dictator Ayub Khan’s basic democracies elections twice and emerged victorious both times.Qaim Ali Shah was also a close all of former president and prime minister Zulfikar Ali Bhutto. He defeated Ghous Ali Shah in the 1970 general elections and became the state minister for industries.The PPP leader also took part in the Movement for the Restoration of Democracy (MRD) against ex-military dictator General Zia-ul-Haq in 1980s.He lost to Ghous Ali Shah in the 1997 general elections. He became member of the Parliament’s upper house (Senate) the same year.He was elected as Chairman District Council Khairpur in 1960. He was elected M.N.A in general election 1970 general election and served as Federal Minister for Industries & Kashmir Affairs. He is a member of the Sindh Provincial Assembly. Currently he is the President of the Pakistan Peoples Party of Sindh, a province which forms the core strength of the PPP and is besides the home province of Benazir Bhutto.

Qaim Ali Shah served first term as Chief Minister of Sindh from 2 December 1988 to 25 February 1990. He contests elections from the Khairpur constituency from where he has won six times. He lost only once in 1997, to Ghous Ali Shah. He was subsequently elected to the Senate of Pakistan.

Qaim Ali Shah was imprisoned under martial law when General Zia-ul-Haq was in power and was present when Zulfikar Ali Bhutto was sentenced to death.