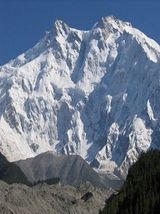 Nanga Parbat also called Diamir,naked mountain and Killer Mountain one of the world’s tallest mountains, whose length is 26,660 feet (8,126 metres) high.Nanga Parbat situated in the western Himalayas 17 miles (27 km) west-southwest of Astor, in the Pakistani-administered sector of the Kashmir.The mountain’s steep south wall rises nearly 15,000 feet (4,600 metres) above the valley immediately below and the north side drops about 23,000 feet (7,000 metres) to the Indus River. Nanga Parbat is the second highest mountain of Pakistan and ninth highest in the world. It not part of the Karakoram. It is separated from the Karakoram by the mighty Indus River. Since the first disastrous British expedition started very early In 1895 A.D Albert Frederick Mummery led an expedition to the peak, and reached almost 6,100 m (20,000 ft) on the Diamir (West) Face. mountaineers have tried to ascent its summit through different routes but few lucky ones have succeeded. In 1934 four German climbers and 6 porters perished in a storm. In 1937 disaster 18 Sherpas and 12 climbers were buried alive by avalanche that covered their camp.  In fact Nanga Parbat has claimed more lives than any other 8000ers relative to the number of attempts.[1]  Details Last year, a total of 14 climbers were attempting to summit Nanga Parbat in June, when bad weather forced them to return to the base camp. Unfortunately, a Spanish and an Argentinean climber Alberto Zerain and Mariano Galvan went missing at Nanga Parbat Mazeno Ridge, and it is believed that they were apparently caught in a fatal avalanche somewhere above 7,000 meters. The two missing climbers left base camp on 19th June, but remained in their tent for three days at an altitude of 6,100 metres because of bad weather. They again started their summit, but their contact with the fellow climbers was lost on 24th June.[3]  Last Year

The Romanian climber Alex Gavan, who was attempting Nanga Parbat on Kinshofer route, abandoned his summit to lead the search of these missing climbers. A rescue operation through an army helicopter was conducted, Alex Gavan of which was part off. The rescue efforts were finally called off on 1st July after a final helicopter flight over the ridge on July 1. The photographic evidence suggested that an avalanche had struck sometime in the prior eight days, and the climbers were presumed dead.

Nanga Parbat massif is the western corner pillar of the Himalayas. It is an isolated range of peaks just springing up from nothing, and is surrounded by the rivers Indus and Astore. Nanga Parbat or “Nanga Parvata” means the naked mountain. Its original and appropriate name, however, is Diamir the king of the mountains. Nanga Parbat (main peak) has a height of 8,126m/26,660 ft. It has three vast faces. The Rakhiot (Ra Kot) face is dominated by the north and south silver crags and silver plateau; the Diamir face is rocky in the beginning. It converts itself into ice fields around Nanga Parbat peak. The Rupal face is the highest precipice in the world. Reinhold Messner, a living legend in mountaineering from Italy, says that “every one who has ever stood at the foot of this face (4,500m/14,764ft) up above the ‘Tap Alpe’, studied it or flown over it, could not help but have been amazed by its sheer size; it has become known as the highest rock and ice wall in the world!”.

Nanga Parbat has always been associated with tragedies and tribulations until it was climbed in 1953. A lot of mountaineers have perished on Nanga Parbat since 1895. Even today it is claiming a heavy toll of human lives for, the mountaineers, in search of adventure and thrill, are becoming its victims in pursuit of their eagerness to find new and absolutely un-climbed routes leading to its summit.

It was in 1841 that a huge rock-slide from the Nanga Parbat dammed the Indus river. This created a huge lake, 55 km long, like the present Tarbela lake down-stream. The flood of water that was released when the dam broke caused a rise of 80 ft in the river’s 3 level at Attock and swept away an entire Sikh army. It was also in the middle of the nineteenth century that similar catastrophes were later caused by the damming of Hunza and Shyok rivers.

The Nanga Parbat peak was discovered in the nineteenth century by Europeans. The Schlagintweit brothers, who hailed from Munich (Germany) came in 1854 to Himalayas and drew a panoramic view which is the first known picture of Nanga Parbat. In 1857 one of them was murdered in Kashgar. The curse of Nanga Parbat had begun.[5]  Discovered Nanga Parbat has tremendous vertical relief over local terrain in all directions. To the south, Nanga Parbat boasts what is often referred to as the highest mountain face in the world: the Rupal Face rises 4,600 m (15,090 ft) above its base. To the north, the complex, somewhat more gently sloped Rakhiot Flank rises 7,000 m (22,966 ft) from the Indus River valley to the summit in just 25 km (16 mi), one of the 10 greatest elevation gains in so short a distance on Earth. Nanga Parbat is one of only two peaks on Earth that rank in the top twenty of both the highest mountains in the world, and the most prominent peaks in the world, ranking ninth and fourteenth respectively. The other is Mount Everest, which is first on both lists. Nanga Parbat along with Namcha Barwa on the Tibetan Plateau are both considered to mark the west and east ends of the Himalayas.

The mountain is easy to reach ( Karakoram Highway approaches the base of the mountain from the north), but is not so easy to climb. Unstable glaciers and frequent storms and avalanches have proved hazardous.[6]  Easy to Reach