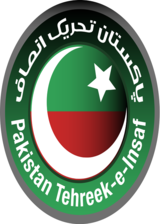 PTI takes immense pride in its being the only party which does not function on dynastic politics and is Non family party. It has more than 10 millions members in Pakistan and abroad and is perhaps the largest Party by membership. The 2013 elections results depicted how PTI stormed to the third position as the the largest party and emerged as the second largest party in Punjab and Karachi. This was a serious blow for the PML N and MQM who have for years ruled Lahore and Karachi respectively. PTI was the winner Kyber Pakthunkhwa which had always been monopolized by the governments of Awami National Party. The 2013 elections clearly resulted in PTI emerging as the second most popular party in the country.[1]  PTI PTI was founded by Imran Khan on 25th April in 1996 in Lahore. It was founded initially as a source Political movement. Its first central executive committee was formed under the control of Imran Khan and Naeemul Haque, Ahsan Rasheed, Hafeez Khan etc. PTI began to grow at a very slow pace and did not Achieve immediate popularity. In 1999, the constitution of PTI was approved by the Central Executive Committee and in 2002, October, Imran Khan ran for the office of National Elections.

Member of the Parliament

He became the Member of the Parliament for Mianwali which is also his hometown. Imran and his party has been Deeply critical of the entire political system of Pakistan. The PTI rejects political order as corrupt, Inefficient and against the basic principles of Pakistan. In protest to the corrupt regimes, PTI began its Grassroots campaigns to increase the awareness about his political party and also politicize the forlorn Masses. The 2008 elections were boycotted by PTI and during the rule of PPP and Zardari the popularity of Khan And his political party PTI heightened to new heights. PTI promised to create a Pakistan which is the self Reliant and sovereign, free from debt and truly independent and also free from the tyrannical rule of the Elites and feudal lords.[2]  History

Pakistan Tehreek e Insaf agenda is built upon the visions of Iqbal and Jinnah. It seeks for a modern Islamic republic that the advocate’s individual’s welfare. PTI major aims are political, economical and social Stability for all religious, ethnic communities residing within Pakistan. The rule of Law is the most sought Principle in the mission of PTI. Establishment of a strong accountability and anti-corruption structure is also a very important part of PTI’s agenda.[3]  Mission In April 1996, Pakistan Tehreek-e-Insaf (“Movement for Justice”) political party was established and Khan became its chairman. He represented Mianwali as a member of the National Assembly from November 2002 to October 2007, he was again elected on 11 May 2013, while his party gained 35 seats in the National Assembly. Global Post mentioned him third in a list of nine world leaders of 2012 and recognized Khan as the face of the anti-drone movement in Pakistan. According to Asia Society, Khan was voted as Asia’s Person of the Year 2012. As the Pew Research Center, in 2012 a majority of Pakistani respondents offered a favorable opinion of Khan. The survey also revealed Khan’s fame among youth. On 31 December 2014, news reports floated saying Khan has married British-Pakistani journalist Reham Khan.[4]  Chairman Imran Khan The PTI is determined to provide a credible new leadership that can restore Pakistan’s political and economic sovereignty through building a new bond of trust between the government and the people. Only through the active participation of the people can we collectively mobilize our human and material resources to forge ahead on the road to a confident and self-reliant nation.[6]  Bond of Trust The PTI is not merely a political party; it is a broad based movement that embraces the interests of all Pakistanis. A people whose cultural and ethnic diversities blend into common goals and aspirations for a just society based on a democratic culture and the rule of law.[7] Broad Based Movement

The ideology of the party is Welfaris, Islamic Democracy, and Communitarianism. Insaf Student Federation, Insaf Youth Wing, and Insaf Women Wing are the student wing, youth wing, and women with of this party.The headquarters of PTI is located in Islamabad.[8] ideology

10 April 2017 – Pakistan Tehreek-e-Insaf (PTI) Chairman Imran Khan on Sunday demanded of Prime Minister Nawaz Sharif to tender his resignation after ‘loosing moral authority’ to keep the post amid Panama Papers’ revelations.In an ‘address to the nation’ from his Islamabad residence Bani Gala, Khan also demanded that the government should form an inquiry commission led by the serving chief justice of Pakistan. “The commission should also include white-collar crime experts and an audit firm that follows the trail of money to determine where it leads,” he added.[9]  Resignation

The PTI chairman gave the government time till April 24 to take an appropriate action over the issue, after which he added he will announce a future course of action.The PTI chief said they will march on Prime Minister Sharif’s residence in Raiwind instead of Red Zone in Islamabad.“Dharna had to be abandoned because of an incident, but I promise you all that I will not back down this time around.” Imran Khan said Pakistan was heading towards disaster but ‘by the grace of Almighty, the nation has got an opportunity to turn the country’s course’.[10] Dharna

He said Panama Leaks was not a conspiracy hatched by his PTI party but it was an international affair in which several key diplomats, politicians and government officials had been named. Many democratic countries launched probes immediately after the release of Panama Papers, he added.Khan said people need to stand against oppression and injustice as it was every Pakistani’s responsibility to protect the country. “Nations head towards disasters when they don’t stand for justice,” he added.[11]  Panama Leaks

Pakistan Tehreek e Insaf which was founded in 1996 by Imran Khan who always claimed to work for the betterment of the country by giving the people of Pakistan a ‘Naya Pakistan’ has finally won the General Elections 2018 after the hard work of day and Night and after the continuous struggle of 22 years. But unfortunately, they couldn’t win with a majority of seats so they collaborated with MQM in order to have a majority of seats. Tehreek e Insaf will start their government officially on 10th or 14th of August 2018 where a number of people will gather from outside the country also in the oath-taking ceremony of its leader Imran Khan.