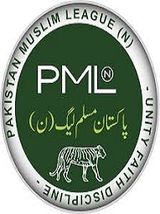 The General council Meeting served its major platform to elect presidents and secretaries while it is also responsible for promoting Party’s activities and raises funds.Although its power of center lies in the heartland of itself in Punjab province it also retains considerable support in Sindh, Khyber Pakhtunkhwa, Baluchistan, Azad Kashmir and Gilgit Baltistan. It is the only party in the history of Pakistan to receive a two-third majority in parliament outright through parliamentary elections in 1997. Pakistan Muslim League PML (N) or Nawaz is the favorite political party of huge circle of people of Pakistan. The Leader Mian Mohammad Nawaz Sharif and Chief Minister Mian Shahbaz Sharif have been contributing in the progress of Pakistan. The political symbol of PML N is Lion.[2]  Key Persons

In May 1998 the PML (N) government led by Prime Minister Nawaz Sharif ordered the six nuclear tests, in response to Indian nuclear tests. The tests were extremely popular and PML (N)’s image and prestige raised in a record level. The Pakistan Muslim League-N believes in that prosperous agriculture is the backbone of national prosperity. During its federal government, the PML-N successfully privatized the major heavy industries under its planned industrial development programmed and shifted from the traditional feudal aristocracy to a growing class of modern and moderate entrepreneurs. According to IRI  Survey report from July 2012 till November 2012, PML (N) is the most favorite political party of Pakistan. PML N scored 32% and stood at top. This report is to analyze interest of people for the General Elections 2013 of Pakistan.