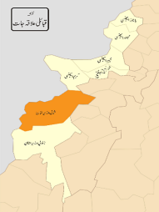 Dawar (or Daur) is a big Pashtun tribe of FATA, Pakistan. Dawar tribe is based exclusively in North Waziristan Agency alongside the Utmanzai Wazirs. The center of Dawar tribe’s population is the Mir Ali-Miranshah-Boya-Datta Khel belt in North Waziristan.
The Dawars are divided into two main clans i.e.[4] Dawar Tribe of North The area has been described as the land of high and difficult hills with deep and rugged defiles. The mountains of North Waziristan are geographically apart from the larger mountain system of the Koh-e-Sufaid in the north and the Sulaiman in the south. The Waziristan hills were subject to igneous activity during the late Cretaceous period. The highly mineralized zone of Razmak is connected with it. The mountains and hills form a rampart between Pakistan and Afghanistan. Average height of the Waziristan hills are about 1500 to 2500 meters above the sea level. The important ranges in the Waziristan hills are Derwesta, Laran, Vezda, Ingame, Shoidar, Shawal, Eblunkai, Alexandra, Muzdak and Zakha. Tochi river flowing through the agency have formed the Tochi Pass named after the river, through which armies, people and cultures have moved in and out of this region. The Tochi Pass connects Ghazni in Afghanistan with Bannu in Pakistan. Tochi river has carved sufficiently large and important valley which is bounded by hills and mountains on all sides except the eastern side. It is about 100 kilometres in length and opens up into Indus valley near Bannu. The Tochi valley is fertile and cultivable. Ketu and Kurram are the other two minor rivers which flow in the northern part of the agency. In 1849, the tribes of North Waziristan were under the sovereignty of the Kabul government. As both the Wazirs and Daurs used to be at logger heads amongst themselves, the Daurs invited the British to enter their country in order to establish peace in this area and to give them protection from Wazirs. The British, therefore, entered North Waziristan in 1894 and made agreement with the tribes. The Britishers introduced a regular system of land record and revenue administration for the most fertile part of the Tochi valley. It was later in the year 1910 when North Waziristan was made a full fledged agency. In 1935-36, a Hindu-Muslim clash occurred over a Hindu girl of Bannu, who had married a Muslim which led to disturbance in Waziristan. The tribesmen rallied round one Mirzali Khan, Tori Khel Wazir, who was later on given the title of the Faqir of Ipi. Jehad was declared against the British and the Faqir of Ipi with his huge Lashkar (force) remained at war with the British till the latter evacuated the area in 1947. The Faqir of Ipi died in 1960. Inspite of his opposition to the Islamic Republic of Pakistan the Jirgas in Waziristan decided in favor of joining Pakistan. The chief tribes in North Waziristan are the Utmanzai Wazirs and Daurs. Besides, there are small tribes like the Gurbaz, Kharsins, Saidgis and Malakshi Mahsuds. These tribes, except Saidgis, are Pakhtoons. According to the tribal annals they are descendants of Karlaur, who in turn descended from Kais Abdur Rashid. As regards the ethnic origin some historians believe that they are semites, but it is the general belief that they are of Aryan origin. The traditions of the tribesmen however indicate that they are descendants of Karlan and Ghurghust, and are, therefore, generally accepted as being a tribe of Karlanri or Ghurghust Pathans. The Saidgis are the descendants of a Syed who accompanied the founder of the Wazir tribe. The Wazirs dominate the hilly tracts; Khaisora. Sherathala Plain, Kaitu valley, Lower stretches of the Kurram River and upper parts of Tochi valley beyond Kharakamar. They are divided into three main sections namely. Ibrahim Khel; Wali Khel and Mamit Khel. These sections are further divided into several sub-sections. The Daurs are divided into two main sections viz: Upper Daurs and Lower Daurs and the area occupied by them is also known as Upper Daur and Lower Daur. They have settled in the fertile Tochi valley, mostly on the left bank of Tochi river from Khajuri to Kharkamar. The Kharsins are affiliated with Bora Khel and Madda Khel Wazirs. They live near the Durand Line to the north-west of the agency flanked by Madda Khel Wazirs and Saidgis. Mahsuds are the cousins of Wazirs; both have common ancestor, viz. Wazirs. A section of Mahsuds called Bahlol Zai Malakshai occupy a small portion of Razmak surrounded by Bora Khel and Tori Khel Wazirs. The Saidgis occupy Zoi valley, Shawal. Dawegar and Dande plain near the Durand Line. In North Waziristan there are many beautiful areas like Shawal and Razmak. Which have natural beauty and a great history. A resident of Razmak named âHaji Saif ullah said:
Haji Saif ullah: Razmak is not less than London in beauty. Moreover the British people were calling this Razmak as mini London. As a lot of fruits are here and the weather of Razmak is also very good. Razmak is the main focus of tourists and a lot of tourist comes here in summer season. Another area Shawal is very beautiful area but the road leading to that area is not good. So people face problems. Cadet College was established here in 1978. There is an âAlexander of Fortâ which is on very height. Government should give attention to provide facilities for tourists. There are large levels project in progress in which Bannu Ghulam Khan High Way and Eesa Razmak road are included. This highway will be used for supply of different things to Afghanistan and Central Asia and the distance will be reduced. This high way will play an important role in the progress and development of this area. North Waziristan is also very rich in literature. The chairperson of Wahdat ADabi Toolana named Saif Mohmand said:
Saif Mohmand: In past there were only few poets like Alhaj Laisha Darpakhel and Raahi Jan. But now we have more than two hundred poets as the people of this area are very talented. Another great poet Masoom Gharmaz also belongs to North Waziristan.

In Peshawar University the total number of students who belong to North Waziristan is approximately 1100.A lot of the children of North Waziristan are studying in Warsak, Cadet College etc. People have economic resources but they have no opportunities for education. Cadet College was a great educational institute and on parents day the parents of the children come there from all over the country. But now there are army tanks in the building of that Cadet College. Our army is using that college as a outpost for them.

How to Live People

The Daurs live in houses closed together in a compact area. In case of Wazirs a large joint family lives either in one and the same house called Ket or Kot or in houses adjacent to one another, but separated from the houses of the other families. A walled enclosure of mud or mud and stones three to five meters high is called Kot. Most of the Kots have fort like structure with a tower in the center of every Kot used as a strategic point for fighting with the enemy, when hostilities break out. Every section in a village has a Masjid and a common sitting place. One or several households have a private guest house hujra attached to the house. The common dress of tribesmen consists of shirt, trousers, Waist-coat, sheet of cloth, turban and Chappal. The Wazir woman wears a sleeved blouse or petti-coat and a long heavy shirt with trousers. She covers her head and body with a sheet of cloth. A married woman wears coloured trousers while unmarried wears simple trousers. On festivals and marriages Wazir women put on colourful and ornamented blouse and a multi-coloured frock some times made of 40 metres cloths. To further adorn themselves the women put on rectangular pieces of silver and gold that hung on their forehead and side-ways down to ears. A Daur woman’s dress is almost similar to a Wazir woman. As footwear she uses Chappal of leather.{:ref:{ Dress & Ornaments }} On 4 June 2007, the National Security Council of Pakistan met to decide the fate of Waziristan and take up a number of political and administrative decisions to control “Talibanization” of the area. The meeting was chaired by president Pervez Musharraf and it was attended by the Chief Ministers and Governors of all four provinces. They discussed the deteriorating law and order situation and the threat posed to state security. The government decided to take a number of actions to stop the “Talibanization” and crush the armed militancy in the Tribal regions and Khyber Pakhtunkhwa.{:ref:{ Waziristan strategy of Pakistan }}

The NSC of Pakistan has decided the following actions will be taken to achieve the goals:

The ministry of interior has played a large part in the information gathering for the operations against militants and their institutions. The Ministry of Interior has prepared a list of militant commanders operating in the region and they have also prepared a list of seminaries for monitoring. The government is also trying to strengthen the law enforcement in the area by providing the Khyber Pakhtunkhwa Police with weapons, bullet-proof jackets and night-vision devices. The paramilitary Frontier Corps will be provided with artillery and APC’s. The state agencies are also working on studying ways to block FM frequencies of illegal FM radio channels.