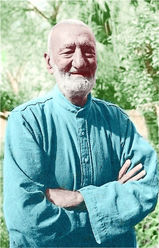 Khan Abdul Ghaffar Khan, better known as Bacha Khan, advocated for the rights of his fellow Pashtuns in the British Raj in the early 20th century. Focusing on frontier regions of what is today northwest Pakistan, he eschewed violence and advocated peaceful means of protest against British rule. The Muslim activist’s work earned him the moniker “Frontier Gandhi” — a nod to his Hindu counterpart and close friend Mahatma Gandhi.[1]  Khan Abdul Ghaffar Khan Khan Abdul Ghaffar Khan commonly known as Bacha Khan was born the in the village of Utmanzai in February 6, 1890. His father Bahram Khan was a well-to-do landowner of Mohammadzai clan. According to the tradition, Abdul Ghaffar Khan was sent to the local mosque to get Quran education. At the age of 11 he was sent to Edward Memorial Mission School Peshawer. He left his matric examination incomplete to take commission in army. He could not, However, get himself settled in army environment and resigned. He decided to continue his studies and went to Campbellpur, Qadian and Aligarh but without much success.[2]  Early Life

Work as a Social Reformer He decided to work as a social reformer and for that purpose he opened a school at Utmanzai since he realized that no development was possible without getting education. During the Khilafat Movement, he joined the ‘Hijrat Movement’ group and migrated to Afghanistan. There he met a lot of leaders including Amanullah.

In 1921 Abdul Ghaffar made Anjuman-i-Islah-i-Afghanian in order to bring social reforms in the Pakhtun society. Being highly impressed and influenced by the personality of Gandhi, he started non-violence movement in his area of Pakhtuns. Soon he became very popular in NWFP and emerged as a leader. He established Khudai Khidmatgars (Servants of God), also known as ‘Red Shirts’. They were pro-Congress and worked hard for united Pakhtunistan. Initially it was a social organization but later on it turned into a political party.[3]  Khudai Khidmatgars

Gandhi with
Ghaffar Khan’s politics was totally against All India Muslim League as he was in favor of united India. Therefore Ghaffar Khan joined the Congress and remained closely associated with Gandhi and Nehru family for the whole life though the Congress seemed to betray him by signing the referendum agreement at the time of partition in 1947. He wanted to have an autonomous and independent Pakhtunistan whereas Muslim League had been struggling ceaselessly for an independent Muslim State. When it was decided to hold a referendum in the NWFP, Abdul Ghaffar Khan argued that it should be held on the basis of Pakistan or Pakhtunistan and not on the basis of India or Pakistan but to no avail. He was stunned and embarrassed when the result of referendum showed 99 % votes cast in favor of Pakistan. Had he been loyal to or khimatgar of Pakistan, he would have surely won hearts of the people throughout the province for he did possess humane and social qualities. But he cherished his dream of Pakhtunistan and continued his vain and baseless struggle for his utopia for the rest of his life.[4]  NWFP Bacha Khan forged a close, spiritual, and uninhibited friendship with Gandhi, the pioneer of non-violent mass civil disobedience in India. The two had a deep admiration towards each other and worked together closely till 1947.[6]  Bacha Khan and the Indian National Congress
He pledged full support to the government and attempted to reconcile with the founder of the new state Muhammad Ali Jinnah. Initial overtures led to a successful meeting in Karachi, however a follow-up meeting in the Khudai Khidmatgar headquarters never materialised, allegedly due to the role of Khyber-Pakhtunkhwa Chief Minister, Abdul Qayyum Khan who warned Jinnah that Bacha Khan was plotting his assassination.
Following this, Bacha Khan formed Pakistan’s first National opposition party, on 8 May 1948, the Pakistan Azad Party. The party pledged to play the role of constructive opposition and would be non-communal in its philosophy.

He died on January 20, 1988, under house arrest in Peshawar, Pakistan. He was buried at his home in Jalalabad, Afghanistan. [7]  Died