The Pakistan Navy (Urdu: پاک بحریہ, Pak Bahr’ya) (PN) is the naval warfare/service branch of thePakistan Armed Forces. Pakistan’s Navy is responsible for Pakistan’s 1,046 kilometres (650 mi) coastline along the Arabian Sea and the defense of important civilian harbors and military bases. Navy Day is celebrated on September 8 in commemoration of the Indo-Pakistani War of 1965.[1] history-facts-knowledg  –   blogspot.com The  Pakistan  Navy’s current and primary role is to protect country’s economical and military interests at home and abroad, executing the foreign and defence policies of Pakistan Government through the exercise of military effect, diplomatic activities and other activities in support of these objectives.As for the 21st century, the Pakistan Navy also focuses on global expeditionary operations, and played a vital role in the establishment of Pakistan Antarctic Programme.[2] Pakistan Navy’s current and primary –   role Since 2001, the  Pakistan  Navy has increased and expanded its operational scope and has been given greater national and international responsibility in countering the threat of sea-based global terrorism, drug smuggling and trafficking issues. 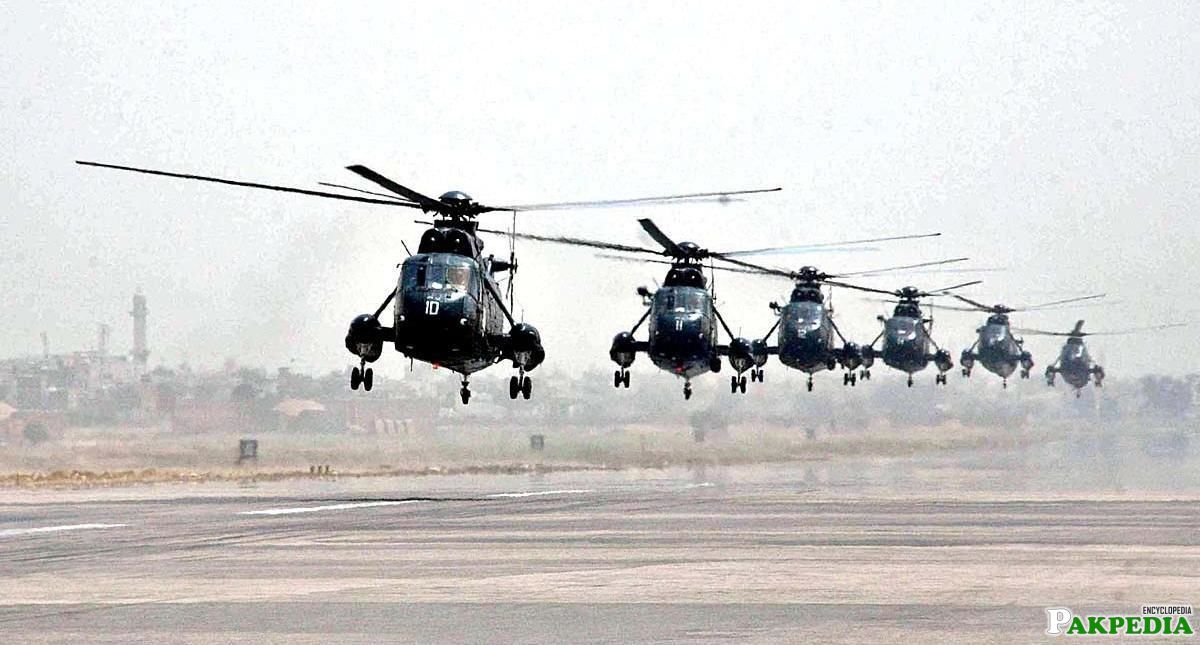 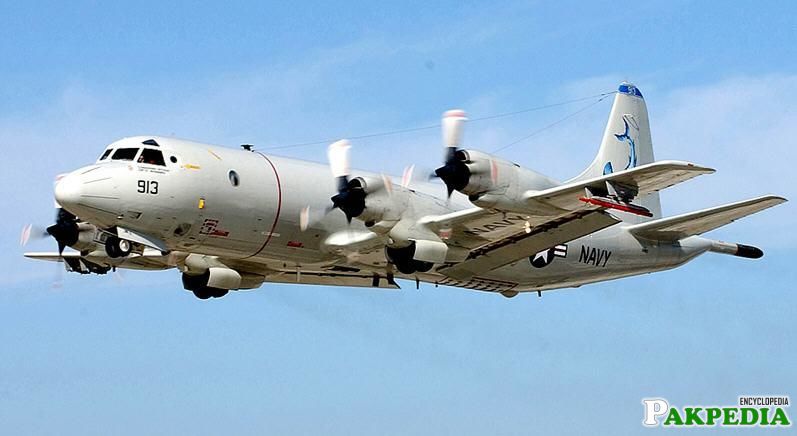 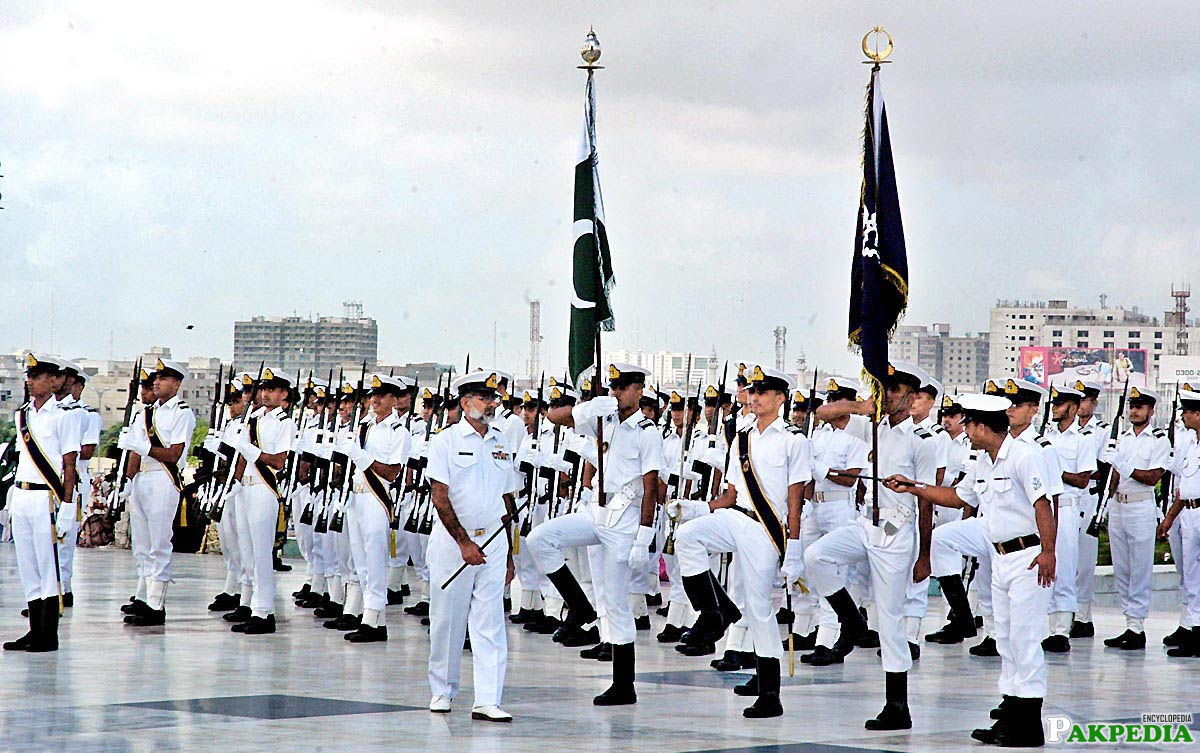 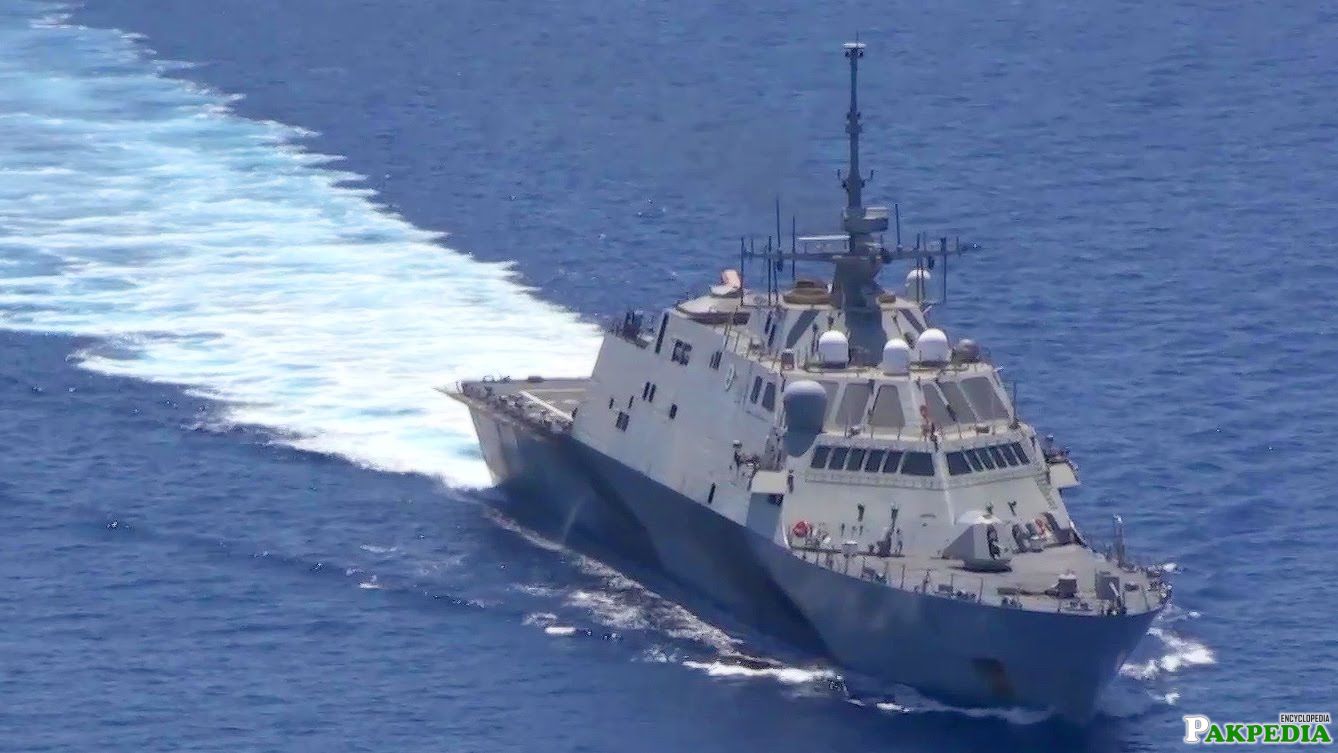 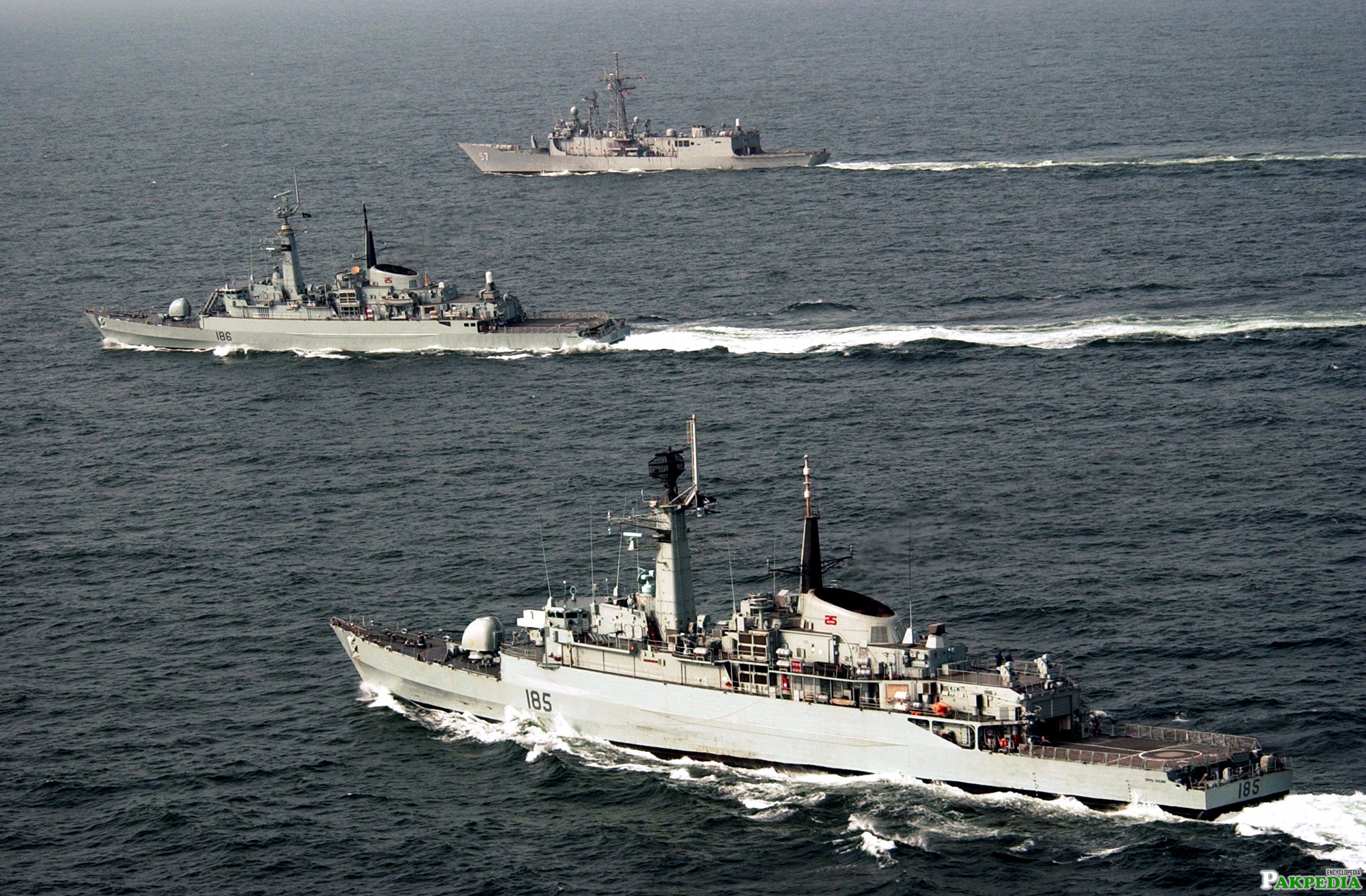 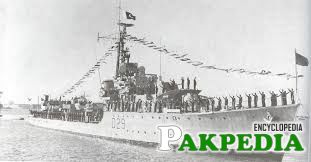 The foundation of the Royal  Pakistan  Navy came a day after the independence of  Pakistan  on 15 August 1947. The Armed Forces Reconstitution Committee (AFRC) divided the Royal Indian Navy between both India and  Pakistan . The Royal Pakistan Navy secured two sloops, two frigates, four minesweepers, two naval trawlers, four harbor launches and some 358 personnel (180 officers and 34 ratings) and was given a number of harbour defence motor launches. It was also given a high percentage of the delta areas on the Pakistan coast.[3] foundation of the Royal Pakistan –   Navy

The Royal Pakistan Navy saw no action during the Indo-Pakistani War of 1947 as all the fighting was restricted to land warfare. In 1956 the Islamic Republic of Pakistan was proclaimed under the 1956 constitution. The prefix Royal was dropped and the service was re-designated as the  Pakistan  Navy, or “PN” for short. The PN Jack and Pakistan flag replaced the Queen’s colour and the White Ensign respectively. The order of precedence of the three services changed from Navy, Army, Air force to Army, Navy, Air Force.[4] The Indo-Pakistani War of 1947 – PN In February 1956, the British government announced supplying of several major surface combatants to  Pakistan . These warships, a cruiser and four destroyers were purchased with funds made available under the US Military Assistance Program. The acquisition of a few additional warships from 1956–63, comprising two destroyers, eight coastal minesweepers and an oiler, was the direct result of Pakistan’s participation in the anti-Communist defence pacts of SEATO and CENTO.

During the Indo-Pakistani War of 1965, the navy was involved in a conflict for the first time. Apart from carrying out successful bombardment of the coastal town of Dwaraka – codenamed Operation Dwarka, the navy’s submarine PNS Ghazi was deployed, Pakistan’s first submarine and remaining the flagship submarine for  Pakistan  Navy till deployed against Indian Navy’s western fleet at Bombay (Mumbai) port.[5] Apart from carrying out successful – bombardment

Karachi, the hub of Pakistan’s maritime trade, housed the combatant headquarters of the  Pakistan  Navy and almost the entire naval fleet. On December 4 the Indian Navy launched a naval attack, Operation Trident, consisting of 3 OSA class missile boatsescorted by two anti-submarine patrol vessels. Nearing the Karachi port, they detected Pakistani presence and launched their SS-N-2 Styx anti-ship missiles. The obsolescent Pakistani ships had no viable defence against such missiles and, as a result, the PNSMuhafiz and PNS Khyber were both sunk while the PNS Shahjahan was damaged beyond repair.[6] Pakistan’s maritime trade, housed the – combatant On 8 December 1971 the Hangor, a Pakistani Daphné class submarine, sank the Indian frigate INS Khukri off the coast of Gujarat, India. This was the first sinking of a warship by a submarine since World War II. 18 officers and 176 sailors of the Indian navy were killed in this operation. The same submarine also damaged another warship, INS Kirpan. Attempts were then made by Pakistan to counter the Indian missile boat threat by carrying out bombing raids over Okha harbour, the forward base of the missile boats. Another Indian attack on the Pakistani coast, named Operation Python, occurred on the night of 8 December 1971. A small group of Indian vessels, consisting of a missile boat and two frigates, approached  Karachi . The Indian ships sank the Panamian vessel Gulf Star, while the Pakistan Navy’s Dacca and the British ship SS Harmattan were damaged. [7] Navy, or the military in general, in – East Pakistan  Pakistani fuel reserves were also destroyed by the Indian vessels.The damage inflicted by the Indian Navy and Indian Air Force on the PN stood at seven gunboats, oneminesweeper, two destroyers, three patrol crafts belonging to the coast guard, 18 cargo, supply and communication vessels, and large scale damage inflicted on the naval base and docks in the coastal town of Karachi. Three merchant navy ships; Anwar Baksh,  Pasni  and Madhumathi; and ten smaller vessels were captured.Around 1900 personnel were lost, while 1413 servicemen were captured by Indian forces inDhaka.The Indian Navy lost 18 officers and 176 sailors and a frigate, while another frigate was damaged and a Breguet Alizé naval aircraft was shot down by the Pakistan Air Force. According to one Pakistan scholar, Tariq Ali, the  Pakistan  Navy lost a third of its force in the war. The primary reason for this loss has been attributed to the central command’s failure in defining a role for the Navy, or the military in general, in East Pakistan. Since then the Navy has sought to improve the structure and fleet by putting special emphasis on sub-surface warfare capability as it allows for the most efficient way to deny the control of Pakistani sea lanes to an adversary.

The Pakistan Navy played an integral role to stop the arm smuggled in Balochistan conflict. After the discovery of Arms in the Iraqi Embassy in  Pakistan , the Navy made an effort to apply a naval blockade to prevent arms smuggling in the Province. Later, the navy provided logistic support to the Army and the Air Force in the conflict.From her inception, the Navy sought to diversify its purchases instead of depending solely on the United States, which had placed an arms embargo on both India and  Pakistan . It sought more vessels from France and China. [8] Pakistan Navy participated in Operation – Freedom  The Pakistan Navy thus became the first navy in South Asia to acquire land based missile capable long range reconnaissance aircraft.During the Kargil War episode, the Pakistan Navy was deactivated along with the Pakistan Air Force, according to Chief of Naval Staff Admiral Fasih Bokhari. However, when Indian Navy launched Operation Talwar, Pakistan Navy responded by deploying Eastern and Southern Naval Command to keep Indian Navy from Ports of Karachi and Baluchistan. The Naval Air Arm maintained its reconnaissance and patrol operations near at the Arabian sea. During the 2001–2002 India-Pakistan Standoff, the Pakistan Navy was a put on high-alert and more than a dozen warships were deployed near at the Arabian Sea.Later in 2004, the  Pakistan  Navy participated in Operation Enduring Freedom along with U.S. warships traveling through the Arabian Sea and Persian Gulf. The PN Maritime patrol and reconnaissance aircraft also undertook surveillance sorties in North Arabian Sea and helped the Headquarters Naval Centre (HQ NAVCENT) in picture compilation.[9] Pakistan  concentrate on self-reliance  – its military 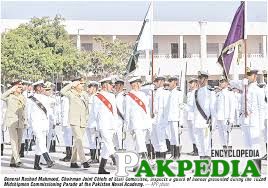 Pakistan Navy has an academy of its own called the  Pakistan  Naval Academy, it is the home of initial training of officers of Pakistan Navy. The academy also has provided basic training to the officers of Allied Navies. The Chief of Naval Staff of Qatar Emiri Navy and many high ranking officers of Royal Saudi Navy as well as other navies in the Gulf were graduates of the PNA. The academy is a full fledged training institution catering to the needs to Pakistani junior Naval officers. The Navy also has its own navy war college called the Pakistan Navy War College specializing in imparting Naval Warfare techniques to officers of the  Pakistan  marine forces.[10] its own called the Pakistan Naval – Academy
Other worthwhile training institutions are:

The 108th Midshipmen commissioning parade was on Saturday on 23rd December 2017,  held at the Pakistan Naval Academy in Karachi which included candidates from Bahrain, Jordan, Qatar, Maldives and Saudi Arabia as well.
Prime Minister (PM) Shahid Khaqan Abbasi was the chief guest on the occasion and was given a guard of honour. Chief of Naval Staff Admiral Zafar Mahmood Abbasi also attended the passing out parade of 129 officers comprising 57 Pakistanis.
It is worth mentioning here that Pakistan has so far trained more than 2200 cadets from other countries. The current naval chiefs of Saudi Arabia, Qatar and Bahrain have also received training from the Pakistan Naval Academy. [12] 108th Prade 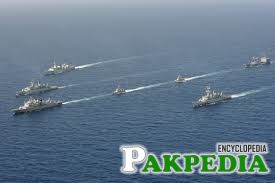 Pakistan Navy established  Pakistan  Marines sometime in 1971, but it was decommissioned from its services following the aftermath of Indo-Pakistani war of 1971. However, Pakistan Marines was re-established on April 14, 1990 with about 2,000 men  and plans to expand the force to the size of the Corps, significantly by 2015. The Marines are under the control of Pakistan Navy, using the same military ranks. The Marines are currently headquartered atQasim Marine Base,  Karachi .[14] The Marines are currently – headquartered 24 Dec 2017 – Shahid Khaqan Abbasi became the first Prime minister of Pakistan who boarded, sailed and dived on a submarine. PM Abbasi also witnessed Pakistan Navy’s display of power on his visit to the Jinnah Naval Base Ormara.The Prime Minister devoted his full day to witness the operational preparedness of Pakistan Navy.Chief of Naval Staff Admiral Zafar Mahmood Abbasi and senior naval officials also accompanied the PM.The Prime Minister set sail onboard Pakistan Navy Submarine SAAD in North Arabian Sea. Chief of the Naval Staff, Admiral Zafar Mahmood Abbasi also accompanied the Premier during his maiden voyage onboard the submarine. The Prime Minister also conducted submarine diving and surfacing procedures.During his visit onboard the submarine, Prime Minister was briefed about history of Pakistan Navy submarine force and achievements made by this elite force during 1965 and 1971 wars. [16] first pakistani PM