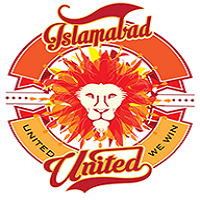 Islamabad United is a professional Pakistani Twenty-20 franchise cricket squad that performs in PSL (Pakistan Super League). This team is based in the capital city of Islamabad. It was created in 2015 to contest PSL’s 1st season, and the sports entity of Leonine Global Investments, the ‘Leonine Global Sports,’ purchased this franchise.

Owners of Leonine Global Sports are Ali Naqvi and Amna Naqvi. The franchise’s chief-operating officer is Shoaib Naveed, Hasan Cheema is a strategy manager, and Rehan-ul-Haque is the general manager. Rawalpindi Cricket Stadium is the home ground of the team, and Misbah-ul-Haque is serving as team coach. This article has every detail about the article, including Islamabad United Players. 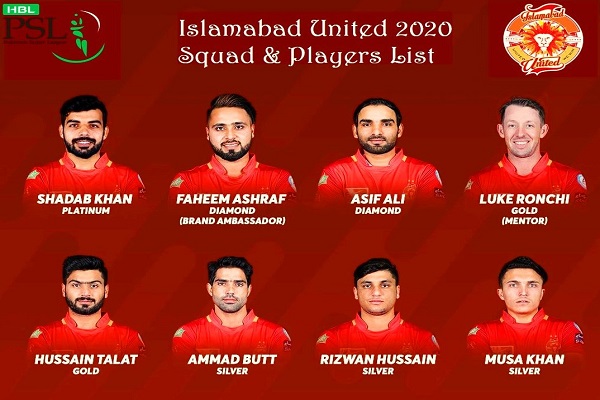 It had a poor start in season 2016 of PSL and ranked 3rd in the round-robin stage, reaching its knock-out stage. United won four games out of eight games and finished with 8-points.

They faced Karachi in the eliminator and won by 9-wickets; Muhammad Sami’s bowling made this success possible as he took 5-wickets for 8-runs. Dwayne Smith and Brad Haddin scored half-centuries as Islamabad secured their target of one-hundred and eleven runs in the fifteenth over.

United won the final match of the PSL 2016 season by 6-wickets. Islamabad bowled 1st after winning a toss, and Quetta made one-hundred and seventy-four score in twenty overs. Russel took three wickets for thirty-seven. United began well with Smith making the seventy-three score, and Brad Haddin made an unbeaten sixty-one, enabling United to make one-hundred and seventy-four and won the title. 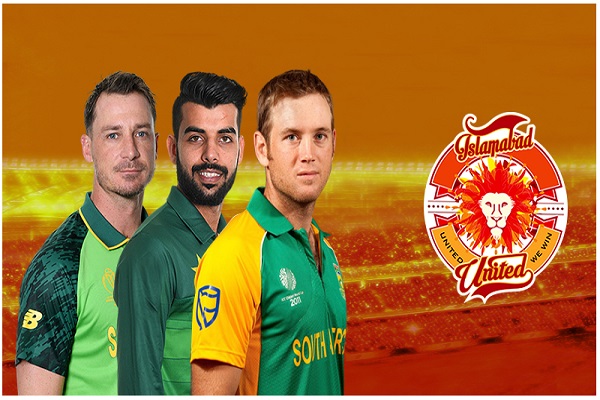 In PSL draft 2017, Islamabad retained seventeen players from its previous team. To complete a twenty men team, United picked Shadab Khan, Zohaib Khan, and Ben Duckett. As Andre Russell was banned for 1-year, so Steven replaced him. Nicholas Pooran returned Ben Duckett after Ben left the team due to his national duties.

Islamabad played the 2017 season’s inaugural match against Zalmi and won by seven wickets, and so maintained their win streak.

In the next match against Qalandars, they got defeat by six wickets after making one-hundred and fifty-eight runs on board. Misbah made an unbeaten score of sixty-one off thirty-six balls, including five sixes.

When the tournament moved to Sharjah, Islamabad defeated Quetta, making it their 1st loss this season. In pursuit of one-hundred and forty-nine runs, they managed to achieve the target with a loss of five wickets. Sam Billings made seventy-eight from fifty with his aggressive batting.

In the next match played against Kings, Islamabad lost by eight runs via DLS (Duckworth-Lewis-Stern) method. When they made ninety runs in given thirteen overs in a rain-spoiled match dropped after 9.4 overs in 2nd innings.

Islamabad had an exciting last-ball victory against Peshawar. This success was made possible by Dwayne Smith’s seventy-two runs on fifty-nine balls; Islamabad restricted opponents to a low score.

In the next match, United got defeated by Lahore by one wicket in a critical game. United batted 1st and faced laborious innings, and at one point, they were 83/6. Shadab Khan, the emerging talent, made forty-two runs on twenty-four balls to help Islamabad make a total of one-hundred and forty-five. 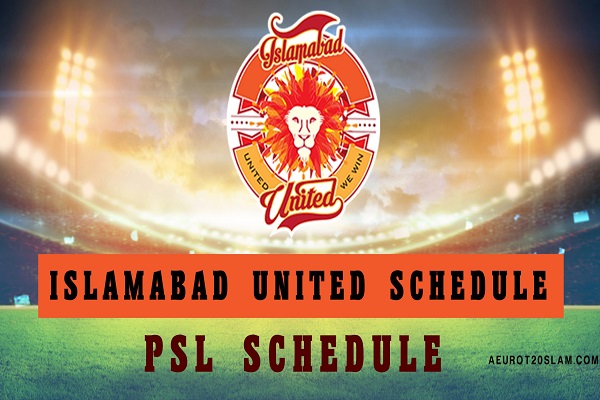 As the tournament moved back to Dubai, Islamabad enjoyed a thrilling victory against Gladiators. After making one-hundred and sixty-six runs, the team was probably close to defeating as Gladiators made one-hundred and eighty-four at a loss of just 1-wicket at sixteenth over. However, after the inability of opponents to chase the target, Islamabad prevailed by one run.

United again met with Kings in the eliminator, and this match was proved a thrilling match. Karachi batted 1st and made one-hundred and twenty-six with all outs. United was expected to win qualifying for 2nd play-off, but Kings prevailed United players with Muhammad Amir, Usama Mir, and Imad Waseem taking.

Islamabad began their season 2018 with a defeat to Zalmi. In pursuit of one-hundred and seventy-six runs squad was reduced to 25/4 inside power-play before it had fallen short by thirty-four runs in given overs.

In the next match, United played against Sultans and won it with five wickets spare. Husain Talat made unbeaten innings of forty-eight runs and proved instrumental in pursuing one-hundred and fourteen in harsh batting conditions.

When the league progressed to Sharjah, United faced a defeat by Quetta by six wickets. They failed to chase a target of one-hundred and thirty-five runs. The team faced Qalandars in the next match and defeated them. United restricted Qalandars to a one-hundred and twenty-one score during the match’s initial innings.

In the next match, United defeated Kings by eight wickets in pursuit of one-hundred and fifty-four runs. The aggressive innings of Luke Ronchi were instrumental in this success.  It led the team to qualify for the final.

The final match was played between Zalmi and United, with the latter winning the match. After winning the toss, Zalmi batted 1st. Zalmi’s batsman Kamran Akmal got out for one run off eight balls, with Patel securing the wicket in 3rd over of the match.

Three wickets by Shadab Khan restricted Zalmi to one-hundred and forty-eight runs. Luke Ronchi of United hit 5-sixes in 1st 5-overs as he made forty-five runs on fifteen balls before getting out in the 9th over. 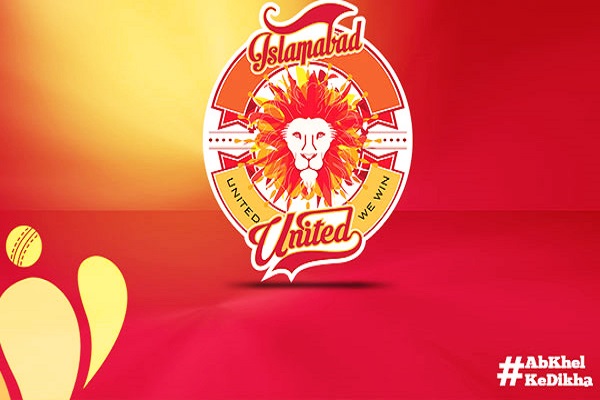 In the season’s opening match, Islamabad defeated Qalandars after pursuing one-hundred and seventy-one runs in the twentieth over, winning this game by five wickets.

Defeated by Gladiators and Sultans

United lost their two matches against Sultans and Gladiators by five and seven wickets respectively.

United played the next match against Zalmi. United gave a target of one-hundred and fifty-eight runs, and at one stage, Zalmi were at 65/5. Darren and Pollard made fifty-five runs in a partnership. Chances of Zalmi’s victory faded when Pollard returned to the pavilion after making fifty-one runs.

Towards the end of the match, United succeeded in winning the match by twelve runs after the captain Muhammad Sami completed a hat-trick in the last over.

Muhammad Sami got injured, and Shadab Khan, the young talent, got a chance to lead the team for the 1st time. But this change didn’t prevent United from winning streak as they defeated Kings comfortably in the end. Ronchi’s sixty-seven runs on thirty-five balls made this victory possible.

In the next match against Sultans, United batted 1st and lost the match by six wickets. They, however, won the next game against Karachi. Karachi had a good start and was expected to make a target of two-hundred runs.

The team’s name and logo were revealed on 22nd Dec 2015 in the ceremony organized at Islamabad’s Polo Club. The logo portrays a lion. 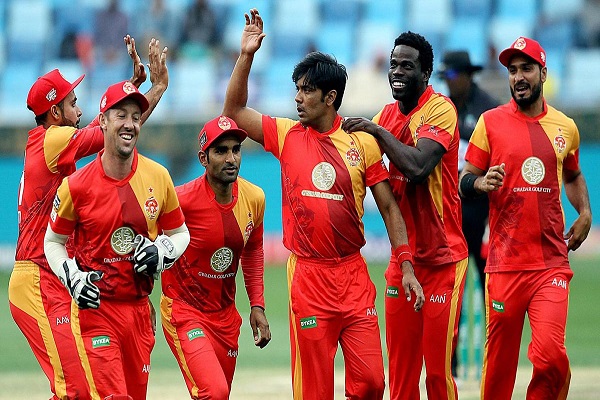 The primary colors of the team are light brown, orange, and red. For season 2019, franchised made a kit design change, making red the prominent shade with a lesser shade of golden. While in the previous kit, gold and red shades were in equal ratio.

From 2016 to 2018, Fawad Khan remained an ambassador of United while singer Ali Zafar remained a star ambassador for season 2016 only. This franchise also concentrated on Empowerment selecting younger talent Momina Mustehsan as Empowerment Champion in season 2017.

Dostea sponsored shirts of the squad in 2016, while GLO Merchandise and Cinepax were the team’s merchandise sponsors. The team’s official partners are WWF Pakistan, Mocca is a food partner, and FM-101 and Dunya News are entertainment and news partners.

PTV sports is the media and brand partner of the team. For 2nd season Islamabad signed Q Mobile as the leading partner and JS bank as the title sponsor. Igloo, Yayvo, and PTCL are other partners.