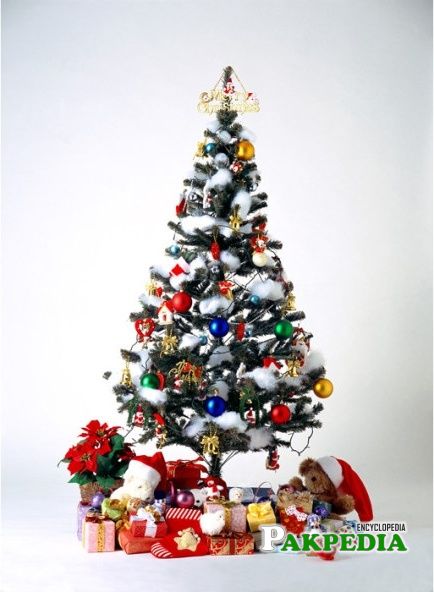 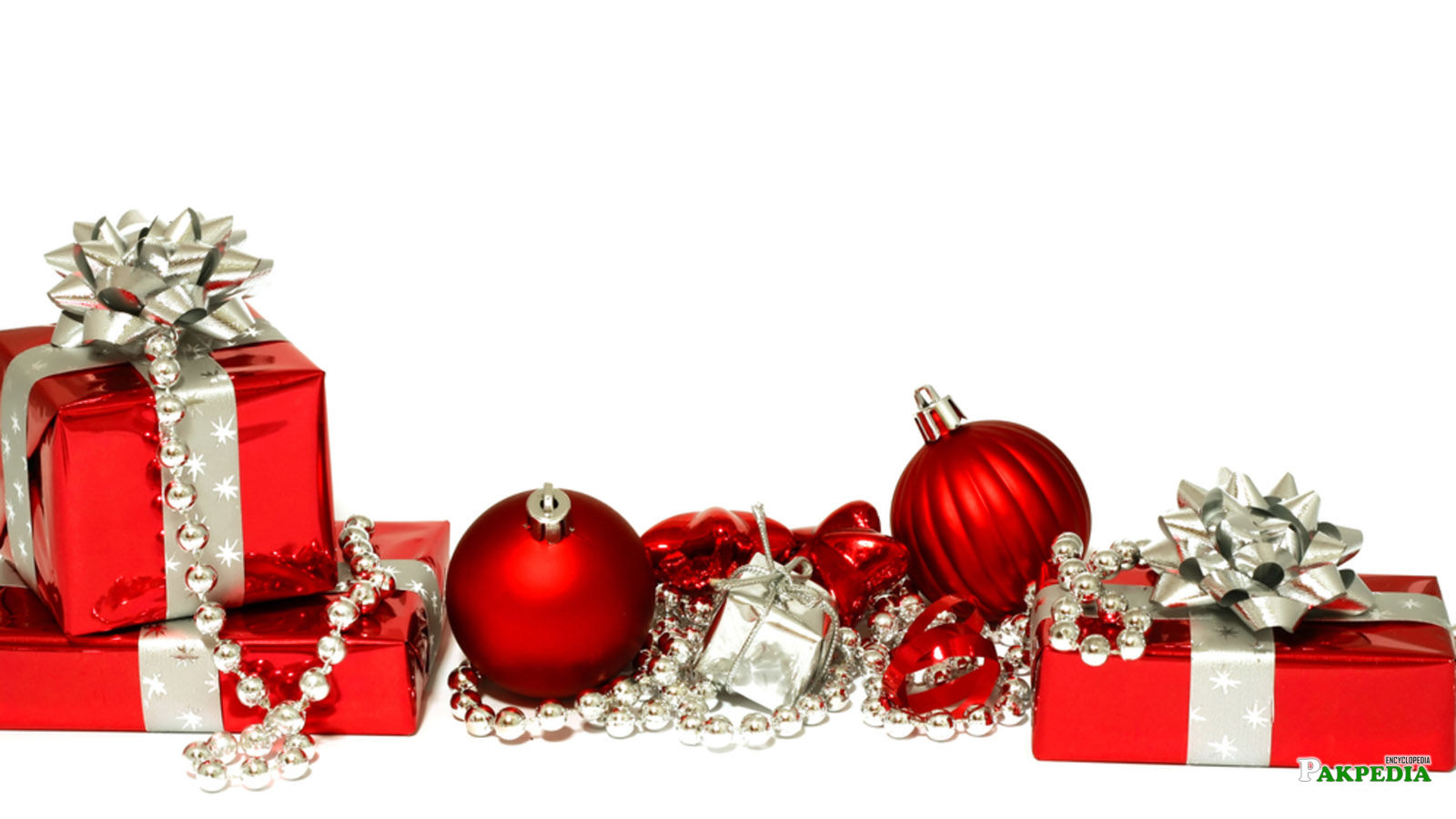 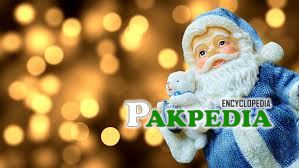 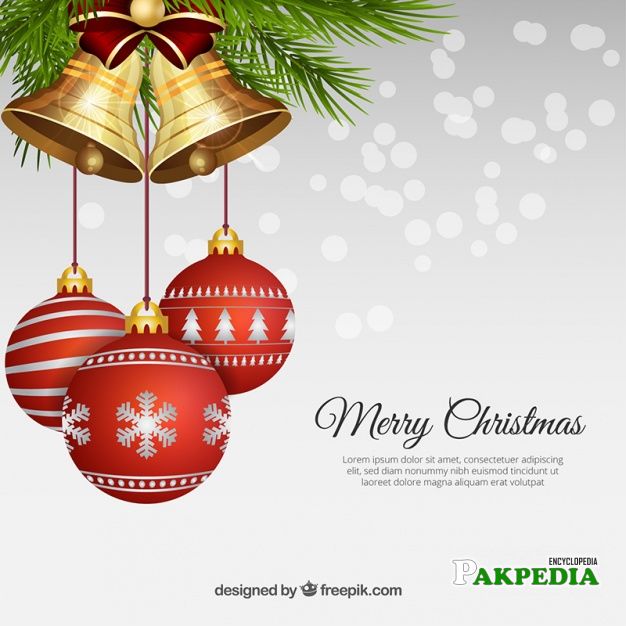 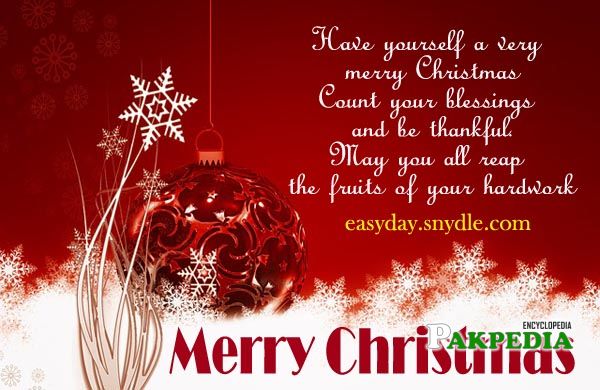 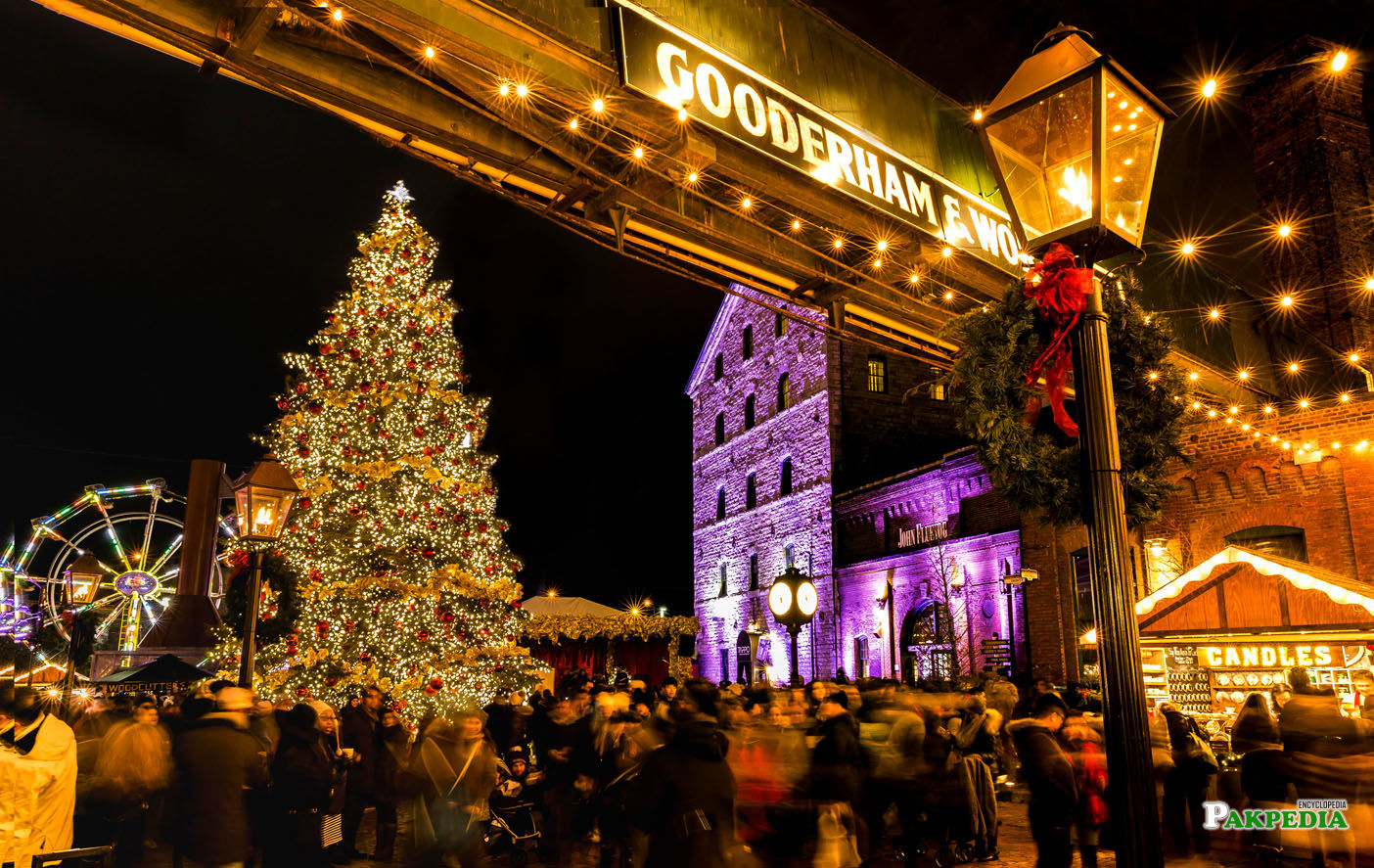 For today’s Christian, the origin of Christmas is, and should be, the birth of Jesus Christ as recorded in the Bible. Nothing more and nothing less. However, most of what we witness on December 25th each year has absolutely nothing to do with that blessed day. In fact, most of the customs and traditions of Christmas actually pre-date the birth of Jesus, and many of them are downright deceptive in their meaning and origin. The date of December 25th probably originated with the ancient “birthday” of the son-god, Mithra, a pagan deity whose religious influence became widespread in the Roman Empire during the first few centuries A.D. Mithra was related to the Semitic sun-god, Shamash, and his worship spread throughout Asia to Europe where he was called Deus Sol Invictus Mithras. Rome was well-known for absorbing the pagan religions and rituals of its widespread empire. As such, Rome converted this pagan legacy to a celebration of the god, Saturn, and the rebirth of the sun god during the winter solstice period. The winter holiday became known as Saturnalia and began the week prior to December 25th. The festival was characterized by gift-giving, feasting, singing and downright debauchery, as the priests of Saturn carried wreaths of evergreen boughs in procession throughout the Roman temples.  Variations of this pagan holiday flourished throughout the first few centuries after Jesus Christ, but it probably wasn’t until 336 AD that Emperor Constantine officially converted this pagan tradition into the “Christian” holiday of Christmas. [1] Origin Origin 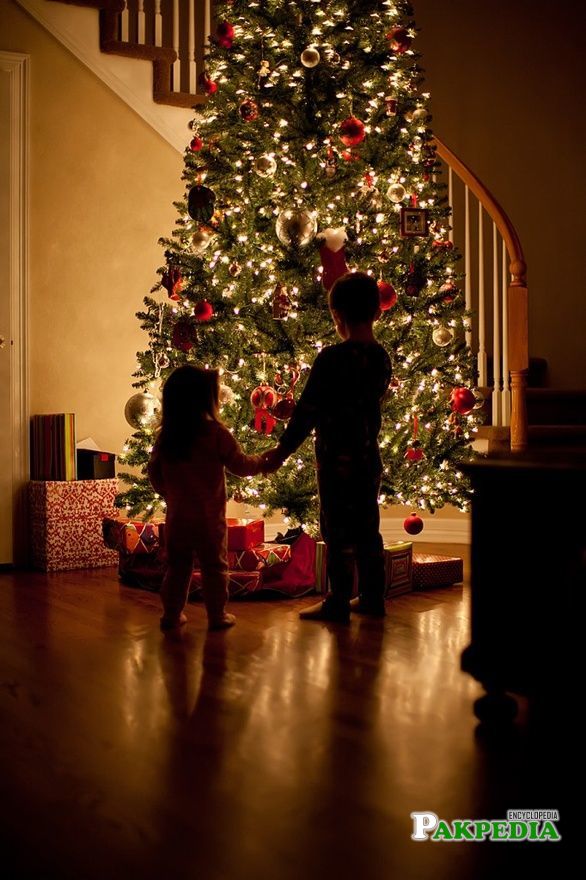 Christmas is also sometimes known as Xmas. Some people don’t think it’s correct to call Christmas ‘Xmas’ as that takes the ‘Christ’ (Jesus) out of Christmas. (As Christmas comes from Christ-Mass, the Church service that celebrated the birth of Jesus.) But that is not quite right! In the Greek language and alphabet, the letter that looks like an X is the Greek letter chi / Χ (pronounced ‘kye’ – it rhymes with ‘eye’) which is the first letter of the Greek word for Christ, Christos. The early church used the first two letters of Christos in the Greek alphabet ‘chi’ and ‘rho’ to create a monogram (symbol) to represent the name of Jesus. This looks like an X with a small p on the top: ☧ So Xmas can also mean Christmas; but it should also be pronounced ‘Christmas’ rather than ‘ex-mas’! [2] christmas or xmass

Snow, Ice and Christmas often go together, although why it should is a bit strange! There is no snow or ice in the Christmas story told in the Bible. However, snow does fall in Israel. Bethlehem and Jerusalem are on a range of hills that go north to south between the Mediterranean Sea and the Jordan valley. The top of these hills are about 1600 ft (500 m) high. The hills can have very cold weather from November to April and snow can often fall. So, although the Bible story may not have snow in it, Jesus may well have seen some snow in his life! The reason that we think of Snow and Ice at Christmas is probably down to the Victorians! Although Christmas was taken over from the Pagan winter solstice festivals in Europe, it was the Victorians who gave us our ‘traditional’ Christmas in Europe and the USA At the start of the Victorian era. One of the main reasons that the Victorians put Snow and Christmas together was the book ‘A Christmas Carol’ written in 1843 by Charles Dickens.

There are many different reasons why candles are associated with Christmas, although no one knows when they first became connected! They were used during ancient winter solstice celebrations a way of remembering that spring would soon come. One of the earliest records of candles being used at Christmas is from the middle ages, where a large candle was used to represent the star of Bethlehem. Jesus is sometimes called ‘the Light of the World’ by Christians. This might have started the custom of the Advent Crown and Advent Candles. Candles are also used during Hanukkah, the Jewish Festival of light which is also celebrated during winter. During the eight nights of Hanukkah, a candle is lit in a special menorah (candelabra) called a ‘hanukkiyah’. Candles are also used in the modern winter festival Kwanzaa, where a special candle holder called a kinara, that holds seven candles is used. Perhaps the most famous use of candles at Christmas are Carols by Candlelight Services. These are services when the church is only lit by candles. Candles were also originally used to decorate Christmas Trees, until safer electric lights were invented! [3] Christmas candles

The custom of sending Christmas cards was started in the UK in 1843 by Sir Henry Cole. He was a senior civil servant (Government worker) who had helped set-up the new ‘Public Record Office’ (now called the Post Office), where he was an Assistant Keeper, and wondered how it could be used more by ordinary people. Sir Henry had the idea of Christmas Cards with his friend John Horsley, who was an artist. They designed the first card and sold them for 1 shilling each. (That is only 5p or 8 cents today(!), but in those days it was worth much much more.) The card had three panels. The outer two panels showed people caring for the poor and in the center panel was a family having a large Christmas dinner! Some people didn’t like the card because it showed a child being given a glass of wine! About 1000 (or it might have been less!) were printed and sold. They are now very rare and cost thousands of Pounds or Dollars to buy now! [4] Christmas cards

The evergreen fir tree has traditionally been used to celebrate winter festivals (pagan and Christian) for thousands of years. Pagans used branches of it to decorate their homes during the winter solstice, as it made them think of the spring to come. The Romans used Fir Trees to decorate their temples at the festival of Saturnalia. Christians use it as a sign of everlasting life with God. Nobody is really sure when Fir trees were first used as Christmas trees. It probably began about 1000 years ago in Northern Europe. Many early Christmas Trees seem to have been hung upside down from the ceiling using chains. Other early Christmas Trees, across many parts of northern Europe, were cherry or hawthorn plants (or a branch of the plant) that were put into pots and brought inside so they would hopefully flower at Christmas time.  [5] Christmas Trees

Christmas crackers are a traditional Christmas favorite in the UK. They were first made in about 1845-1850 by a London sweet maker called Tom Smith. He had seen the French ‘bon bon’ sweets (almonds wrapped in pretty paper). He came back to London and tried selling sweets like that in England and also included a small motto or riddle in with the sweet. But they didn’t sell very well. Legend says that, one night, while he was sitting in front of his log fire, he became very interested by the sparks and cracks coming from the fire. Suddenly, he thought what a fun idea it would be, if his sweets and toys could be opened with a crack when their fancy wrappers were pulled in half. Crackers were originally called ‘cosaques’ and were thought to be named after the ‘Cossack’ soldiers who had a reputation for riding on their horses and firing guns into the air!  [6] Christmas Crackers

One of the main reasons we have the custom of giving and receiving presents at Christmas, is to remind us of the presents given to Jesus by the Wise Men: Frankincense, Gold and Myrrh. The Wisemen visiting Jesus Frankincense was a perfume used in Jewish worship and, as a gift, it showed that people would worship Jesus. Gold was associated with Kings and Christians believe that Jesus is the King of Kings. Myrrh was a perfume that was put on dead bodies to make them smell nice and, as a gift, it showed that Jesus would suffer and die. Christmas itself is really about a big present that God gave the world about 2000 years ago – Jesus! One of the most famous Bible verses, John 3:16, says: ‘God loved the world so much, that he gave his one and only Son, so that whoever believes in him may not be lost but have eternal life.’ 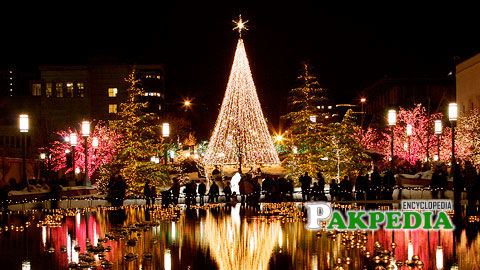 We wish people a ‘Happy Birthday’, and if you’re in the USA in November and December you might say ‘Happy Holidays’, so why do we say ‘Merry Christmas’ more often than ‘Happy Christmas’? Saying ‘Merry Christmas’ rather than ‘Happy Christmas’ seems to go back several hundred years. It’s first recorded in 1534 when John Fisher (an English Catholic Bishop in the 1500s) wrote it in a Christmas letter to Thomas Cromwell: “And this our Lord God send you a mery Christmas, and a comfortable, to your heart’s desire.” There’s also the carol “God Rest You Merry, Gentlemen” which dates back to the 16th century in England. It comes from the West Country in England and it was first published in the form we know it today in 1760. In the English language of the time, the phrase ‘Rest You Merry’ didn’t mean simply to be happy; ‘rest’ meant “to keep, cause to continue to remain” and ‘merry’ could mean “pleasant, bountiful, prosperous”. 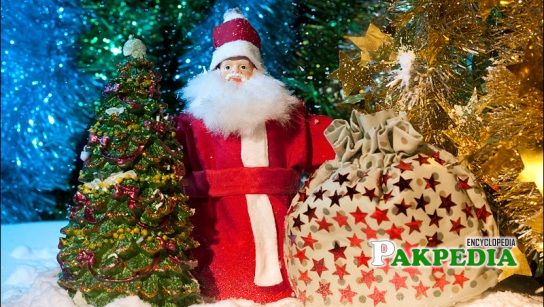 Santa Claus, also known as Saint Nicholas, Kris Kringle, Father Christmas, or simply Santa, is a legendary figure originating in Western Christian culture who is said to bring gifts to the homes of well-behaved (“good” or “nice”) children on Christmas Eve (24 December) and the early morning hours of Christmas Day (25 December). Santa Claus is generally depicted as a portly, joyous, white-bearded man—sometimes with spectacles—wearing a red coat with white fur collar and cuffs, white-fur-cuffed red trousers, and black leather belt and boots and who carries a bag full of gifts for children. This image became popular in the United States and Canada in the 19th century due to the significant influence of the 1823 poem. Santa Claus is said to make lists of children throughout the world, categorizing them according to their behavior (“good” and “bad”, or “naughty” and “nice”) and to deliver presents, including toys, and candy to all of the well-behaved children in the world, and coal to all the misbehaved children, on the single night of Christmas Eve. [7] Santa claus