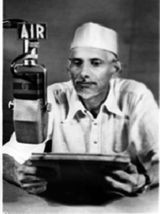 Syed Wajid Ali played a major role in promoting the values of sport for decades throughout his career as President of the Pakistan National Olympic Committee (NOC). He is also known for promoting arts and culture as well as Red Crescent movement in Pakistan.He became the president of Olympic association in 1978 and stayed on the post for 26 years until he retired in 2004 became the longest serving president in the history of association.

Born in Lahore on Dec 20, 1911, Wajid Ali held the POA president’s office from March 3, 1978 to March 11, 2004. During his long association with sports and with the International Olympic Association (IOC), Wajid had the distinction of being the honorary IOC member from 1996 till death.

Wajid completed his education in Lahore and Simla before serving the Army and eventually joining the family business. As a sportsman, he became involved with shooting, riding and hockey besides serving as president of the Pakistan Amateur Athletics Federation (PAAF).

Syed Wajid Ali is survived by his wife Khadija and two children, son Shahid Ali, who is an IOC member, and daughter Niloufer.[2]  Family

Despite a demanding career as an industrialist, Syed Wajid Ali dedicated a lot of energy to expanding health services and sports facilities for the people of Pakistan. His activities in the health sector included being Vice-President of the Pakistan Red Crescent Society and Chairman of the Liaquat National Hospital in Karachi and of the Gulab Devi Chest Hospital in Lahore.[3]  Career

Wajid’s association with the International Olympic Committee (IOC), which lasted 45 years, started in 1959 when he gained election as the second IOC member in Pakistan the first being founder POA president, Ahmed E. H. Jaffer.
Contribution
His contribution to the cause of public service is unparallel including representations on hospital boards and involvement with the Red Cross and Red Crescent societies.

The deceased was a diabetic patient and unwell since the last few years. He fought for his life, particularly after both of his legs were amputated at Karachi’s Liaquat National Hospital which was founded by him.

The late POA chief was at his Lahore residence when his health deteriorated.He was immediately rushed to a nearby hospital where doctors pronounced him dead on arrival. He was laid to rest in his ancestral Miani Sahib graveyard.